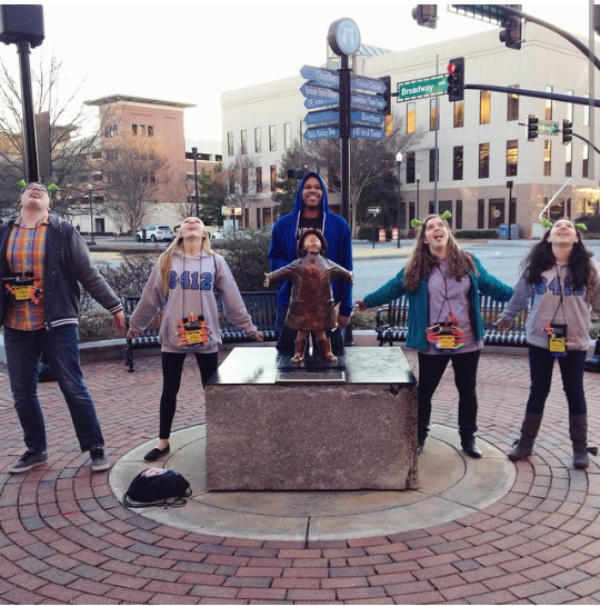 As junior Sammy Herr boarded the bus for the two-hour ride to Columbus, she and her fellow thespians looked forward to a weekend of acting classes and new experiences. “It’s a weekend where you are around 4,000 other high school students who have the same passion and interest in theater,” Herr said, ” and everyone is proud of it.”

Each year, in early February, thousands of Georgia high school thespians gather for an acting and theater conference at Columbus State University.  Students arrived to find their events pre-scheduled. Organizers did this to prevent any one of the events from becoming overcrowded.  These events included shows, workshops on acting skills and techniques,  and a formal dance on the first night.

The conference kicked off with an opening ceremony, where Principal Audrey Toney received an award for administrator of the year and the school’s former Drama department director, David Spearman, spoke as well. The conference  lasted from Thursday to Saturday and, before their arrival, students downloaded an app called Guidebook. It listed all of the available classes and their times so they wouldn’t get lost.

Each morning students rode buses to the university’s campus at 8:40 and arrived back at their hotel around 11 p.m. Their days were spent attending acting classes and exploring the campus. This sense of freedom appealed to Herr and the other 50 attendees from the Mill.

During her time there, Herr took a stage combat class and performed a choreographed fight in front of other workshop-goers. “It was a lot of fun because you learn the tricks on how to make the fight look believable,” she said.

Another first-time goer was sophomore Madison Gunnin. As soon as she arrived she said she felt intimidated because of all the other students with so much talent, but she eventually adjusted. “It was one of the most welcoming places I’ve ever been to.”

Gunnin enjoyed an African dance workshop taught by Mama Yeye, a dancer, choreographer, and playwright of African descent. “It was so much fun because you got to experience African cultural dances and learn about them,” Gunnin said.  “The environment of the class was amazing because no one judges. Everyone looked  ridiculous and you could just be yourself,” she said.

Senior Sydney Johnson took a vocal health class that taught how to properly take care of the vocal chords. Johnson also enjoyed a Broadway musical theater dance workshop. “It reconfirmed why I love theater so much,” she said.

Veteran ThesCon attendee Justin Duhon was selected for a spot in the opening number back. He learned of his selection back in January. He sang “You and Me, But Mostly Me” from the musical “The Book of Mormon.” The rehearsal process was “fun but there was a lot of individual preparation on my part,” Duhon said.

Senior Matthew Reindl, a state thespian officer, didn’t participate in the usual ThesCon activities this year. Reindl helped organize the charities who were present at the conference. He supervised a booth called Broadway Cares Equity Fights AIDS. Here, students purchased items in an auction setting. Auctioned items included signed playbills and show posters like  “Aladdin.”  All proceeds went to people living in Georgia with HIV/AIDS.  “The charity differs from so many others because the money goes to people already diagnosed and living with AIDS,” Reindl said.

Herr said that she can’t wait until next year’s trip.  She said that ThesCon is an experience that can be “life changing and eye-opening.”  “You meet so many new people who have the same interests as you,” she said. “You learn so many new things. You can truly express who you are as an individual and all of it is done through the passion of the fine arts.”