Choices for students, change for teachers 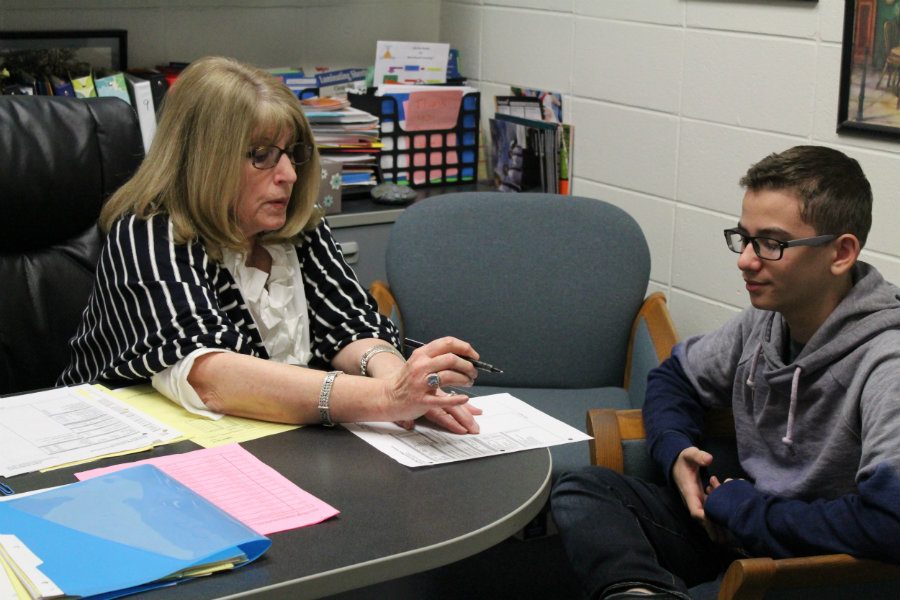 Dr. Sue Hutton helps a student register for his upcoming fall classes. The seven period day schedule has positively impacted students at the Mill, giving them numerous electives to choose from but has also forced teachers to make some changes in their lesson plans.

Should I opt-out of a class? Should I dual enroll? Should I choose another rigorous academic class? These are all questions students have been faced with since the addition of the seven-period day.

Before the 2014-15 school year, students only had to select two electives, but Starr’s Mill established a new seven-period schedule to provide additional room in students’ schedules “to give more opportunities for electives,” assistant principal and registrar, Charlotte Robinson said.

Four classes advertised during elective sign-ups that were never created due to a lack of interest were Latin 1 and 2, Aerobics, Comparative Religions, and to Introduction Law, Public Safety, & Corrections and Security.

Junior Ashton Nowicki said that she is glad the seven period day exists because without it, “I wouldn’t be able to take creative writing, something I have grown to love over the years.”

New class options aren’t the only change resulting from the additional period.

Prior to the the 2014-15 school year, students received a 10-minute break during the middle of the day as well as Instructional Focus, a study hall at the end of the school day where students could get an early start on homework. “I really valued the time I had during my [Instructional Focus] class, to do homework and study,” junior Sam Baker said.

This change sparked a mixed reaction from the student body. Although contradicting her own point, Baker said that she prefers her current seven-period schedule “because I need two rigorous courses, but I also want to take art.”

Junior Lauren Scott disagreed with Baker and Nowicki’s enthusiasm of the seven-period day.

“The seven-period day has made me more stressed because it’s more classes I have to worry about and less time I get to prepare in class for tests and projects,” Scott said.

Students aren’t the only ones suffering from stress. Teachers have felt the pressure of the new schedule since the additional period lead to a decrease in class time.

Science labs are usually built for periods of 60 minutes and Gant said that “[the science department was] already having trouble [during the six-period day] because it was a 55-minute period, and now we are down to almost a 50-minute period.”

The loss of five minutes a class period may not seem like much, but it adds up. “We have cut a day of instruction out of every week, because when we went from a 60 to a 50 minute period. Ten minutes of instruction have been cut per day of a class period,” Gant said. “That’s a lot.”

One of Scott said that one of her major concerns with the shortage of time for each class is that “the teachers don’t get to teach everything they need to when their time is so limited.”

Although a portion of students are feeling more pressure with the additional class and teachers are having to make adjustments to their lesson plans, many students remain to have a positive response to the seven-period day.