A progressive Panther past

Looking back at the Mill’s 20-year history 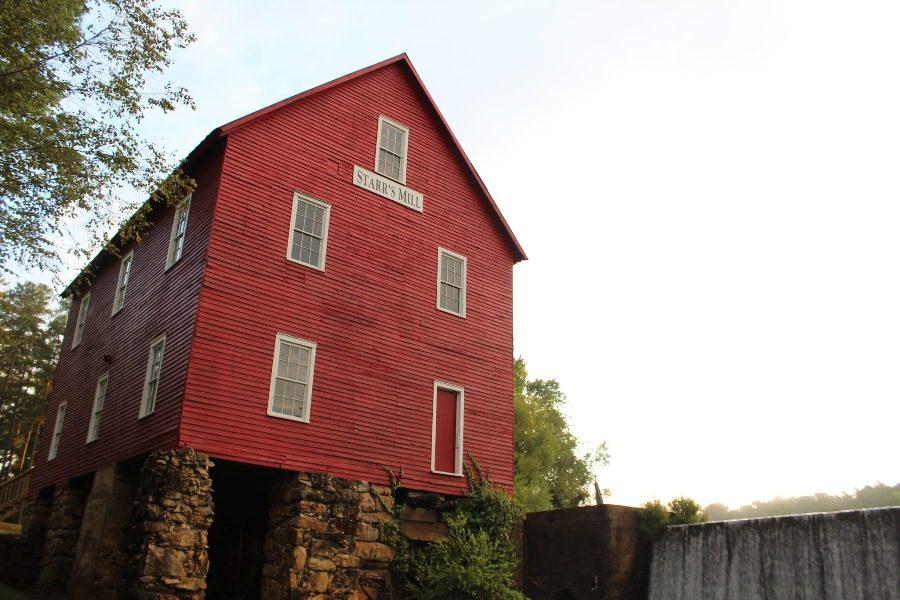 Named after Starr’s Mill, located on GA-85, Starr’s Mill High School will complete its twentieth year as of the end of the 2016-2017 school year. Traditionally, the Mill serves as a backdrop for senior pictures, prom pictures, and scenic enjoyment.

Long ago, before the time of Netflix, Apple CarPlay, and virtual reality,  the roots of Starr’s Mill’s began to sprout.  Since its inception in 1997, Starr’s Mill has become one of the county’s and the state’s most successful high schools.

Despite the school’s potential for success, there were initial complications before opening up the Mill. “We were supposed to open up in the fall [of 1996] and we didn’t come here until January [of 1997] because the building wasn’t ready,” department chair Dan Gant said. “We had no landscaping [and] there wasn’t even a blade of grass outside.”

Aside from the minor landscaping setbacks, a continuous flow of staff and students arrived at the Mill. From 1997 to 2016, Peachtree City, Ga., has seen a decent population change. A census in 2000 reported 31,000 residents. Betsy Tyler, from City Hall in Peachtree City, said that “just over 36,000” people currently live in the area.

Before this period of growth, Fayette County only housed three high schools, McIntosh, Sandy Creek and Fayette County. Starr’s Mill was built for the most obvious reason, the desperate need for more room.

New school boundary lines divvied up students to attend different schools, creating a forum for angry emotions. Parents and Fayette County Board of Education board members fought over the changes.  Science teacher Staci Killingsworth remembers the events. “They were already mad because they had to be in this school, so they just had to take it out on each other,” Killingsworth said.

The reason for the tension was understandable. “[Students] got yanked out of their school and sent to ours,” Killingsworth said.

Although these students were attending a newer, much nicer school than before, most of them still despised the idea of merging schools.  “We had several fights when the school started,” Killingsworth said. The frequently expressed frustrations led to the development of the inevitable rivalry as we know it. The reason we have a rivalry here is because “McIntosh people were mad that they had to come here,” Watkins said. “I think that McIntosh is our true rival, because we stole kids from there to come here.”

After students were divided up by boundary lines to Starr’s Mill, it was difficult to ignore the lack of people in the building. “[There were] very small classes,” secretary Terri Watkins said. “There were only 35, 36, or 37 [staff members] here. Now there’s like 130 of us.”

Psychology and sociology teacher Sean Hickey was a part of the first class to go through Starr’s Mill. When he transitioned from student body member to staff member, Hickey witnessed several changes. “The student population has really increased, dual enrollment didn’t exist when I went here, the number of AP courses didn’t exist, we didn’t have the [Work-Based Learning Program]. All of that has just exploded, [the number of] educational opportunities that didn’t exist [when I was in high school, that exists now],” Hickey said.

With the apparent growth in the number of students and staff since Hickey’s time as a student, the Mill has also experienced many technological advances.  Over his years of teaching, Hickey said that he has noticed a major change in technological reliance.

In the past, students did not have Google Chromebooks to do assignments on, and standardized test weren’t given online. “Technology has a lot to do with  [the changes that have occurred at The Mill],” Hickey said. “And I think it’s the way the world is changing.”

Flashing forward a few years when the school was arguably at its maximum capacity, alumna Emily Woodward began her high school career at the Mill. “When I was in high school we had trailers,” Woodward said. “My graduating class had 500 something kids in it.”

The buildings students learned in isn’t the only change.

Traditions have taken several different turns. Some have died while others have just risen within the past several years. Homecoming and the senior walk are regarded as two of the most notable tradition changes by teachers. “It is funny to see them sort of expand beyond what we thought, like for example, the senior walk is now more elaborate than when we did it before I began teaching, but again, it is still around 20 years later,” Hickey said. “The red carpet, still around. Decorating the hallways, still around. The tailgating, still around. That’s amazing to see.”

Math teacher Derek Abrams was a student at the Mill during Hickey’s beginning years as a teacher. As a former student, Abrams expressed that for the most part “the traditions have stayed the same, even from my graduation to the graduations now. [For example] ringing the bell [for football games], [and] doing the class rings,” Abrams said.

Although Abrams doesn’t recognize new traditions, Hickey has voiced his proud honor of being the name-announcer for graduation the past five years. This new tradition contributes to Hickey’s feeling of pride for the school. “I felt incredibly honored, because I knew how much of a positive tradition that was for me and my class. When the sponsors asked me, it meant a lot.”

Through Hickey and other teacher’s eyes, it is apparent that every tradition and change at Starr’s Mill branches from the cosmopolitan mix of Sandy Creek High, Fayette County High, and McIntosh High. Although the Mill’s traditions stand strong, “we didn’t come up with anything unique that hadn’t been at the other schools, but we’ve twisted it to be our own,” Killingsworth said.