Average is not good enough 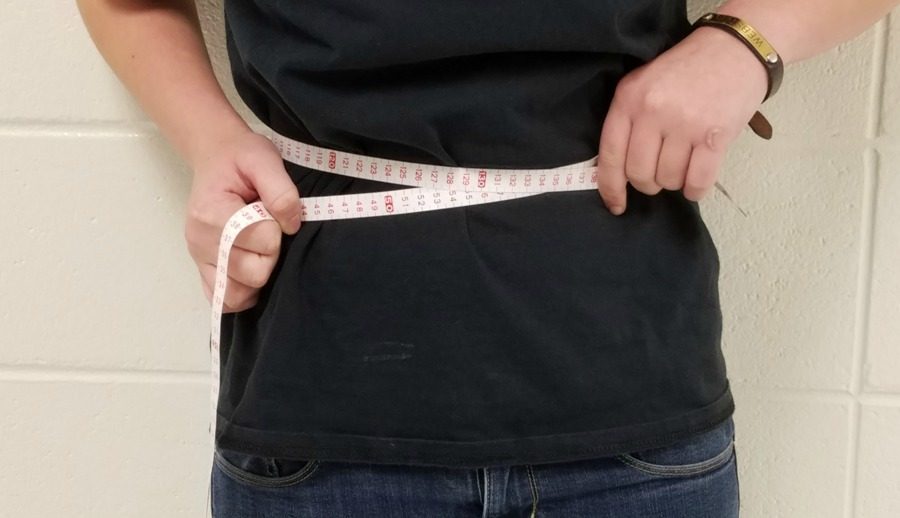 A student measures her waist. Students are pressured with the unrealistic expectation to have a smaller-than-average waist and body frame.

A girl stands in front of the mirror and observes every inch of her body. Her curves are too curvy and her hair is too curly. The picture of an excessively thin teenager on her mirror looks nothing like her average teenage body and all she can do is mentally abuse herself over the flaws. She doesn’t eat anything for the next two days because she strives to look like the thin girl in the picture.

According to Protect Our Girls and Pass the Media and Public Health Act, by the time a girl is 17, she has seen over 250,000 TV commercials broadcasting this unrealistic body as a goal to achieve. This constant flood of unreasonable body images can destroy a person’s self confidence and, in extreme cases, can cause the development of an eating disorder.

The problem starts with the natural human instinct is to mirror the people surrounding them. According to Mirror Neurons, modern science has shown that this is because of a certain type of neuron in the brain, called mirror neurons, can “radically alter the way we think about our brains and ourselves.”

With our brains programmed to mirror what we see in our surroundings, it’s very easy for companies to project images of unrealistic bodies and our minds automatically want to mirror those unrealistic figures. These impractical images can alter the everyday person’s view of body image and make people around the world feel bad about themselves because they cannot reach society’s views of an idealistic body.

One common example of inculcating an unreachable body image into children is Barbie. This popular doll is given to many little children around the world and introduces children to thinking negatively of their bodies to start the negativity of body image before they can develop their own opinions about their own body image. The Barbie proportions are nearly impossible to achieve without major plastic surgery.

According to Nina Golgowski in the her recent article, the person would not be able to hold her head up or walk because of the lack of support.

American actress, songwriter, and singer Demi Lovato proposed a new barbie with proper proportions. The new doll is curvier and more realistic as to set a better example of beauty for younger generations. It allows children to strive toward a realistic body image and feel better about themselves since they cannot reach the previous Barbie’s image.

The same goes for the male counterpart, Ken. Nickolay Lamm, who designed the original Barbie, also designed the original Ken so that young boys could be relieved of the pressure to conform to the unrealistic body image. These “are great steps being taken to improve body image and the idea of what a ‘perfect’ person should look like, and pushing out the idea that there is no one type and you don’t have to look a certain way to be beautiful,” sophomore Madison Knowlton said.

Along with Barbie and Ken, Disney has created many unreasonable standards for perfection with their princesses and princes. Many of the characters are portrayed as the ideal body type even though that shape is unrealistic.

Disney has taken a big step toward a better body image with their new movie “Moana.” The new character has very realistic proportions that can be achieved with little to no work being done.

After ageing out of playing with popular dolls and animated movies, those same children begin to turn to fashion models as ideal body images. However, a bulk of the images in the fashion model industry are “Photoshopped” and skewed out of their normal proportion. “In a perfect world, Photoshop wouldn’t be used on any model,” sophomore Ian Fertig said.

According to Get the Facts on Eating Disorders, of the American elementary school girls who read magazines, 69% say that the pictures influence their concept of the ideal body shape and 47% say the pictures make them want to lose weight . This can often lead to anorexia, bulimia, and other eating disorders.

The male model industry is no better. Many men feel the need to have a muscular and bulky figure. While it is more achievable than the “ideal” female body, it is still not easily achievable without unreasonable exercise for a teenager. The alternative is anabolic steroids, which about 3-12% of teenage men use.

Men and females often have similar problems but women have a better support system for feeling better about themselves. Men do not have the same support for being less than perfect and many of them are expected to internalize their feelings and self consciousness.

All genders have similar problems because most of society’s body shaming focuses on not being good enough.  An overwhelming number of teenagers don’t have enough self-confidence to know that the thin bodies their eyes observe each day suffer from malnutrition and starvation or that those bodies were crafted by a Photoshop program.