A closer look at Close Up 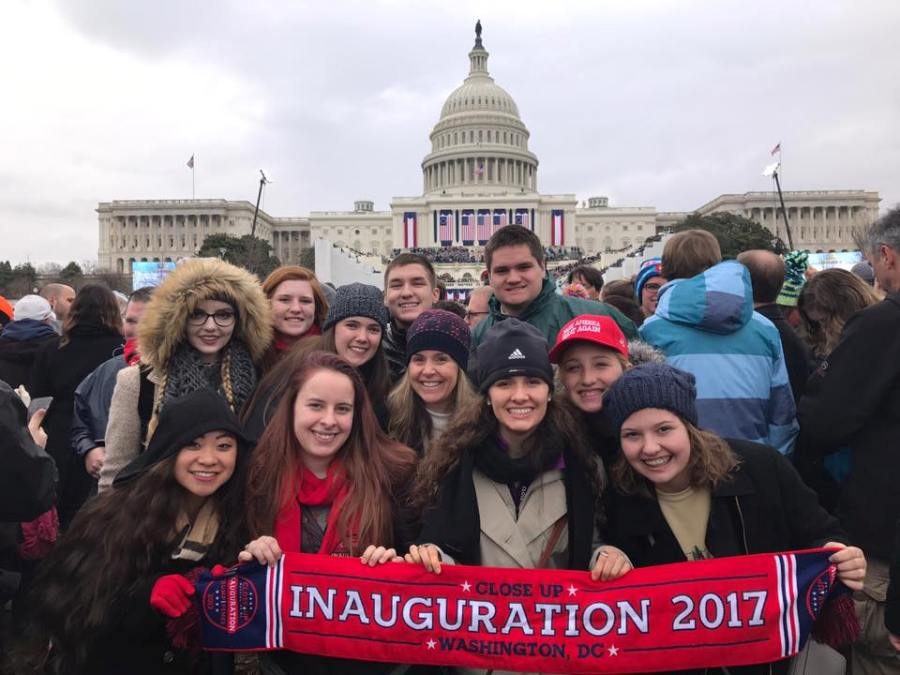 The heavy rain that was forecasted for Jan. 20 managed to hold off, giving 13 lucky Starr’s Mill ticket holders a clear view of the Capitol Building and the inauguration ceremonies for President Donald Trump.

Most students dread the “early” 8:35 a.m. bell that signals the beginning of a normal school day. For 83 Starr’s Mill students, however, the morning of Jan. 16 began well before the rest of their classmates rolled out of bed for their first period classes. The group of students, along with four teachers and principal Allen Leonard, met at the Hartsfield Jackson Airport North Terminal around 4 a.m., kick-starting their week together for the Close Up Washington, D.C. inauguration program.

The Close Up Foundation has its headquarters in Alexandria, VA but focuses intensely on the role and importance of democracy in the U.S. and allows for students to learn more about government, politics, and culture in the heart of Washington, D.C. There are multiple destinations offered through the foundation for both middle and high school levels, some being D.C., New York, Williamsburg and Philadelphia. The week-long Washington Flagship Program runs back-to-back from January through the end of June and for a single week each month from September to December. Partnering with multiple hotels and charter bus companies in the surrounding area, Close Up leaders hold workshop sessions within the hotel that a school has accommodations at and take students to memorials, museums, and monuments for first-hand learning experiences within the nation’s capital.

While three students flew independently, the main Starr’s Mill Close Up group traveled on Southwest Airlines, landing in Baltimore, Md., around 9 a.m. and immediately taking a charter bus to Arlington, Va. After arriving at the Crystal Gateway Marriott Hotel, students were given the freedom to explore Washington, D.C., Crystal City, and their surrounding areas. A “Rule of Four” was set in place, making sure students had traveling companions at all time. Popular destinations included the Holocaust Memorial Museum, Georgetown University, and the various National Mall museums. After returning from free time, students headed down to their first Close Up coordinated dinner before a full evening of activities. Students started the night’s activities off with their assigned workshop groups, which included students from a variety of states. Monday night’s workshop activities included ice breaker exercises and determining personal political efficacy. The night concluded with a combined town hall debate showcasing the differences between conservative and liberal perspectives, where students had the chance to ask questions on domestic issues that they had a passion for or questions about.

Tuesday morning began with a Money in Politics seminar, which covered the influence of money on political campaigns and their respective focuses, and the possibility of which issues a politician advocates for being influenced. Following the seminar, students made their way to the Thomas Jefferson Memorial. While at the memorial, each workshop group reflected on and took notes over the numerous quotes inscribed in the walls to go more in depth about government’s appropriate role in society. The commemoration of warfare was another hot topic of discussion as students visited the Lincoln, World War II, Korean, and Vietnam Memorials. The next destination was Arlington National Cemetery, where students attended the Changing of the Guard, which guards the Tomb of the Unknown Soldier. Students wrapped up the night with a mock congress in which students from each workshop grouped together to debate past bills that covered controversial issues such as abortion, legalization of marijuana, and school vouchers.

Wednesday started with a visit of the newest addition to the Smithsonian, the National Museum of African American History and Culture. Students then made the two mile trek to Union Station, where they shopped and grabbed lunch. Wednesday, also dubbed “Capitol Hill Day,” gave  students the opportunity to meet with their respective state congressmen. Starr’s Mill students held a mini press conference with Congressman Drew Ferguson and staff members for Senator David Perdue. Afterwards, students had the option to tour the Supreme Court of the United States or the Library of Congress. That night, students met in groups, and debated over topics of their choice.

Thursday began with a trip to the Franklin D. Roosevelt Memorial, where students gathered and reflected on the role government should and should not play. Next, they walked two and a half miles to the Martin Luther King Jr. Memorial, where the legacy and importance of the Civil Rights Movement will remain for many years to come. The next stop of the day was the Newseum, where they learned the history of media and the power of reporting. To finish the night off, students attended the Make America Great Again Inaugural Concert, which took place in front of the Lincoln Memorial. Performers such as Three Doors Down, The Piano Guys and Toby Keith headlined.

Friday morning started bright and early for some. Thanks to a group from Washington state, 13 Blue Ticket Area inauguration tickets allowed students to get a closer glimpse at the Capitol Building and inauguration ceremonies. A lottery drawing determines which students were able to have this opportunity. Students who weren’t drawn for tickets had two options for attending the inauguration ceremony, leave at 6:30 a.m with teachers Susan King, Diane Ruane and Patt. Coleman, or leave at 7 a.m. with Leonard and teacher Jon Gloer. The weather was expected to be rainy and cold, but luckily, the rain held out. Students had the rare opportunity to witness the peaceful transition of power and to hear President Donald Trump’s speech, promising to put America first. After a day of witnessing history, students dressed to impress and headed to an Inaugural Ball, where students danced the night away with participants from all four of the Close Up sessions in D.C.

Close Up left the first half of Saturday open, providing schools with a free day to explore D.C. independently. For Starr’s Mill, the morning started out with a tour of George Washington’s estate at Mount Vernon, Va. Students walked the same grounds, saw the same sights and even touched the same staircase railing as our first President once did. Upon returning to the hotel, students had another opportunity to explore the city. While many plans may have been made, the Women’s March on Washington had taken over the city, making it very challenging for those plans to follow through. Metro stations and roads were crowded with protesters, and some students were even stuck in the march. After a long and stressful day, students returned to the hotel for a final workshop to reflect on the week as a whole. Each of the 12 groups selected an individual to speak on its behalf, relaying what they had learned over the week and how they will be affected by the lessons and experiences they had gained. As a final sendoff, students attended a Close Up dance, making the trip a true experience to remember.

Starr’s Mill was the first school to leave on Sunday morning, getting up to an early 3:30 a.m. wake up call. Students said their final goodbyes to their roommates before loading onto the charter bus that would take them back to Baltimore. Although it was still pitch black dark outside, the sun never set on the vivid, eye-opening, experiences that occurred during the week at Close Up. Students had the chance to grab breakfast at Starbucks, Auntie Anne’s or Jamba Juice before they boarded the plane for an 8:35 a.m. flight back to Atlanta. After touching down and ending their week-long journey where it had begun, students reunited with parents to reminisce on the week they left behind in D.C. and to prepare for the less enthralling week of school ahead.