Students with anxiety face more than the audience during class presentations 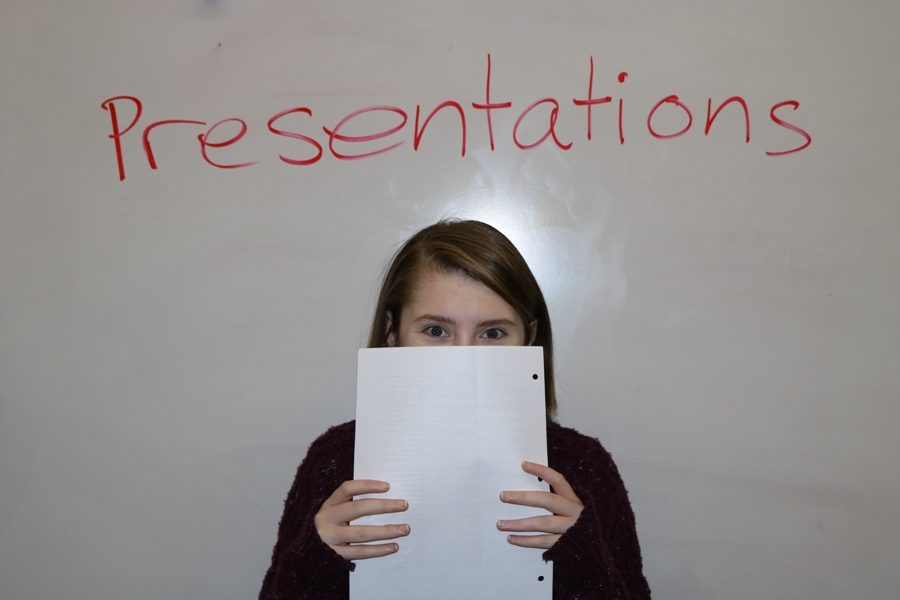 A student prepares to deliver her speech in front of the class. Students who suffer from anxiety may experience a panic attack while presenting material in front of a class, causing a harmful and embarrassing experience for the affected student.

From a young age, schools drill the act of public speaking into the mind of young kids and adolescents in hopes it will become second nature. For students with public speaking anxiety, this drilling turns out to have detrimental effects. The student may start to shake and become nauseous in their seat or experience panic attacks the week before or even days after their speech or presentation. Every time the teen walks into the classroom, they shudder at the memory.

Students are often helpless when it comes to public speaking anxiety in the classroom. The school may not accommodate, leaving the student to deal with this mental illness silently and alone.

Instead of viewing public speaking as a learning experience, people with anxiety see the task as a terrifying endeavor. Not everyone who has anxiety is affected by public speaking, but for those who are it can be overwhelming. “It’s not something you can easily ignore,” sophomore Skylar Knight* said.

When that sense of uneasiness strikes it’s oftentimes called an anxiety attack, but that is not a medical term, so the episodes are classified as either a panic attack or anxiety exacerbation. A single panic attack usually peaks at ten minutes and the effects can last the rest of the day but those memories may last forever.

Short term effects of a panic attack can be breathlessness, racing heartbeat, fear, shaking, and chest pains which can last for a couple of minutes. According to Basic Facts about Panic Attacks, panic attacks can last longer or return almost immediately depending on the person. An article from Anxiety and Physical Illness from Harvard Health Publications states that anxiety can cause digestive and heart issues as well as the increased risk of respiratory problems.

When a panic attack strikes in class, for some, “getting through it” might be pretending that everything’s okay. “There’s the same feelings of suffocation and like your mind is about to collapse, but instead you have to sit there and pretend nothing’s wrong,” Knight said.

When people who have anxiety are in safe space, it’s easier for them to deal with their attack. Some of these methods include using the steps of Acknowledge and Accept, Wait and Watch, Actions, Repeat, End (AWARE), the grounding technique, or meditation. When a panic attack is happening in their safe space, “people have the option to listen to music or wrap themselves up in blankets- basically whatever enables them to get through it,” Knight said.

People without anxiety have a hard time comforting those with anxiety because they have a hard time understanding what the other is feeling. One common misconception is that if the person with anxiety keeps facing their fears, then the anxiety will go away. However, in some cases “no matter how often [I] do it, it never gets any easier,” sophomore Jennifer Jones* said.

One of the ways people think others can overcome anxiety is by taking a public speaking class. Brandon Kendall, the teacher of the speech and debate class, believes that his class will benefit students with anxiety by exposing them to public speaking. “I’ve seen many shy students become much more comfortable with public speaking as the semester rolls on,” Kendall said.

Even though the class would appear to help people with anxiety, facing that is a personal goal that should not be forced upon students. “If I voluntarily chose to read in front of the class or something of a similar caliber it’s because I wanted to push my own comfort levels and attempt it, even if it means dealing with some anxiety,” Knight said.

*The names of these students were changed in accordance with guidelines from the Federal Educational Rights and Privacy Act which “generally prohibits the improper disclosure of personally identifiable information derived from education records.”