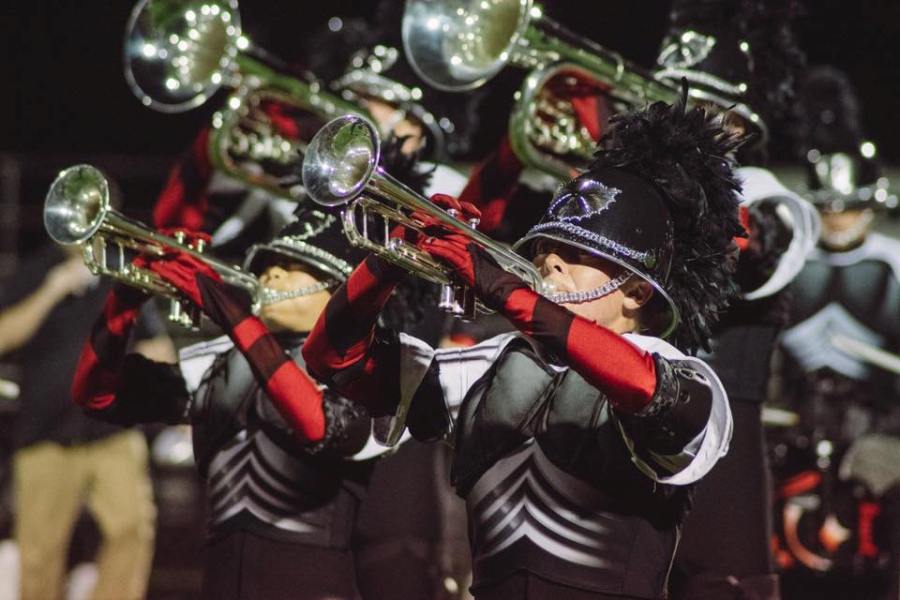 Senior Ryan Ragsdale performs with the Phantom Regiment. He marched trumpet with Regiment and also is marching his fourth year of trumpet with Panther Pride this year.

Senior Ryan Ragsdale recently returned from his summer spent marching with the Phantom Regiment, making him the first Starr’s Mill student to march in Drum Corps International while still in high school.

“[It was] by far the best summer of my life,” Ragsdale said. “There’s no doubt it’s the hardest thing I’ve ever done, but I loved every second of it.”

DCI is a league for large, professional-level drum corps to compete in. These corps form large ensembles that only utilize percussion and brass instruments. They also include color guards. DCI consists of two classes: World Class and Open Class. World class is for the better-known corps, while Open Class corps are smaller or newer.

Ragsdale auditioned for the World Class drum corps Phantom Regiment at the end of last year, and underwent a long process before receiving his membership. Then, it was time to begin the experience.

“[Spring training] was incredibly difficult and very tough on the body,” Ragsdale said.

Phantom Regiment moved in at Rockford University in Rockford, Ill., on May 17 to start spring training where they learned the show, Phantasm, and prepared both mentally and physically to begin performing. They stayed in Rockford until moving to Stillman Valley High School in Stillman Valley, Illinois to continue training for their show.

“I had been gone for a long time, and I really missed some people at home,” Ragsdale said.

Like all 40 drum corps within DCI, Phantom Regiment toured the United States, performing and competing along the way. The corps continued to compete up until August 12, where the 12 finalist corps compete at the DCI World Championship Finals at the Lucas Oil Stadium in Indianapolis, Ind.

The Phantom Regiment finished ninth place in the World Championships. Despite being in the top 10, Ragsdale expected a higher placing than the corp placed.

“I feel like the show deserved more credit than it got, but ninth in the world is still something to be proud of,” Ragsdale said.

The Panther Pride Marching Band will be able to welcome Ragsdale back with all of the knowledge he gained from the experience. According to Ragsdale, he can share ideas such as “the way we rehearse, the attitudes and work ethics of the members, and different strategies and tools for teaching different aspects of marching and playing.”

Now back with Panther Pride, Ragsdale has to catch up on information since he missed band camp rehearsals and the first week of school. Despite missing out on some things here at Starr’s Mill, Ragsdale says he is not worried about catching up from being away at the DCI experience.

“The friends I made, performing for thousands of fans, and just elevating my performance capabilities are what I really loved,” Ragsdale said.