My attempt to go a week without technology 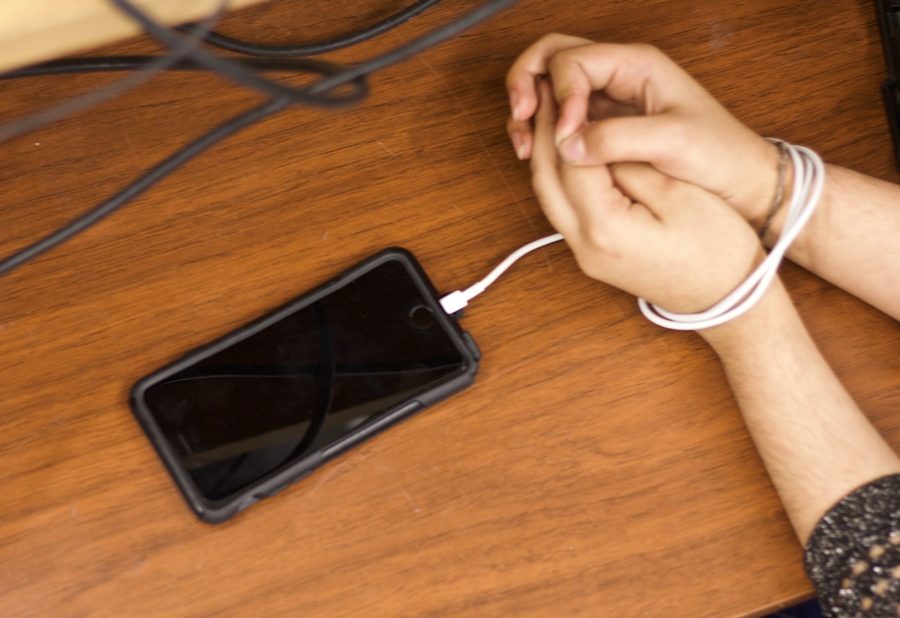 People can easily become entangled in technology's allure, quickly wasting valuable and potentially productive hours each day. Technology is a part of society, but it’s role must be carefully constructed.

Teenagers often spend more time on their technology than they realize. The documentary “Screenagers” used an example where the digital addict had spent all-nighters gaming and had not even realized it. This over-dependence to cell phones and other technology is something that is happening to teenagers and the people around them without them even realizing it. To see the extent of the technological effect on teenagers and society, I decided to conduct an experiment.

I did not know what to expect when I decided to give up all technology, including my phone, aware on how much I relied on it for entertainment and socialization. With that knowledge, I hid my phone in a drawer and proceeded to begin my ordeal.

My experiment began on Friday, Jan. 5. It was only half a day without my phone, because I had been using my phone at school, and resolved to put it away when school ended. Since it wasn’t a completely phoneless day, I didn’t feel like anything had changed, and it had not registered in my mind that I was really going to be affected.

By Saturday morning, however, I definitely felt incomplete, though it wasn’t unbearable. When I wake up, I normally check the time and respond to any new messages I may have gotten, and I had to adjust to that routine change. Since I don’t normally use my phone for my homework, it was more or less unaffected. I did more homework than usual because I suddenly had so much more time on my hands that I had previously been wasting on my technology.

I definitely knew that this was going to be a hard week on Sunday. I woke up extremely agitated, quick to anger, and I had a headache. I was aware that a friend was watching a show I recommended, and this only added to the stress of not having my phone because I wanted to answer her but was unable to do so. I also felt like the day moved really slowly, as I had completed most of my homework Saturday. I yearned for school to start in hopes of something to do.

Sunday night I found out that school had been canceled due to impending inclement weather, and it was not pleasant to hear. All the compressed feelings I had kept inside exploded, and I stormed upstairs to go sleep my feelings away. These symptoms (headaches and violent feelings) were a form of of separation anxiety, which meant I was abnormally attached to my phone, and it truly was not enjoyable, but it is probable that there are more people around me who would also be experiencing the same thing or worse if separated from their phone by various reasons.

While eating breakfast on Monday morning, I griped a lot about the unnecessary school closing. Later, after an hour, I had my grandparents drive with me to Publix, since I actually still don’t know how to get there without Google Maps to help me. I did have ulterior motives, for I knew one of my friends lived basically next to the store, and I wanted to talk to her desperately, at least tell her about the predicament I was in.

Seeing her, definitely raised my spirits and lowered some of the feelings that had me on edge. I knew she would spread the word around to others that I did not have my phone with me before people would start thinking I was ignoring them.

When I got home, I did everything I could to remain busy. No matter what I did, I still felt a little empty. The day had significantly slowed down. All of this can be credited to the large amount of stimulation technological devices previously gave my brain. My mind was not used to not be doing something that engaged me as much as my phone did, causing me to feel less busy.

For Tuesday, there were many routine changes I went through. Most notably, I didn’t feel lethargic like I had the entire weekend, which I could say was a significant improvement. I wasn’t able to listen to music while eating and showering, which actually sped up the process of getting ready. The music was another distraction. It decreased my stress and made me more relaxed, but it decreased my performance, and my ability to accomplish tasks faster. When I met my friends at school, I realized how irrational I was being.

When school started, I realized the importance of my phone during my classes. In history class, we were working on a brochure that required drawing pictures and finding facts about certain people. I am not a good artist, and I require my phone to be able to draw anything satisfactory. Finding the facts were more trying. All around me, my classmates were using their phones to find facts, but I had to look through the glossary of the textbook. It was significantly inefficient, compared to the amount of knowledge I normally have at the tip of my fingers.

My hope in going a week technology free came to an end during my precalculus class, when we needed to use our technological devices to find data. Rather than skipping the assignment, I chose to use a Chromebook. After being assigned notes to read on Blackboard, my school system’s learning management system, it had become clear to me that it would be absolutely impossible to study or do many things school related without at least my laptop. I could go without my phone, but I could not function at school without it. Social media was blocked on it, and I used self-restraint to stay away from Youtube.

Wednesday was a very hectic day because it was club/organization picture day, and I had numerous pictures to take. Four of them happened in a row. There were so many distractions around me, and I had to take care of a lot. I didn’t have the time to take care of my phone, much less crave it or think about it. It had gotten easier to not have it around me, when before it felt like unspeakable torture.

I was not sure I wanted to have my phone back, because it had been made clear to me I had bettered myself without it, though at the same time I had learned that it is something very important to have in this technological age when a cell phone is the only natural way of communication.

This was the second to last day without my phone, and I could feel my resolve to go without social media and Youtube drop. I really wanted to see what was going on, listen to music, watch a DIY tutorial, but I knew I couldn’t break the rules when I had gotten this far.

When I got home, it was just me and my laptop, and I craved it with everything I had. It felt like there was this pressure that would only go away if I watched just one Youtube video. I luckily kept my promise to myself, even though it was quite terrifying to know that I was being so strongly affected by my desire, knowing that the end of my vigil was near.

The last day went quite slowly. Though I was excited to get my phone back, I had a lot of mixed feelings about it as well. In a way it felt relieving to not have to deal with answering five messages from three different people at the same time, or waiting for someone to respond back. When I finally got my phone, I felt all that I learned dissipate, and I almost didn’t care about what I had gone through the whole week. My phone was back and that was all that mattered.

The experience of walking the world without a phone was unforgettable, and a hands-on example on how teenagers and the world run on technology. However, in such an advanced world, it is truly impractical to go about not having at least a computer or email address. It has become something very important in one’s daily life.

Though it is an advancement, it has created a dependency on the stimulation that one gets when it is misused. Using it in a bathroom or while eating simply adds to what society must work together to avoid: the distractions that too much technology offer.

Clear boundaries must be made to avoid unsafe usage, and as technology integrates more and more into our daily lives, more must be done to regulate it.