How NASCAR drivers stay on track 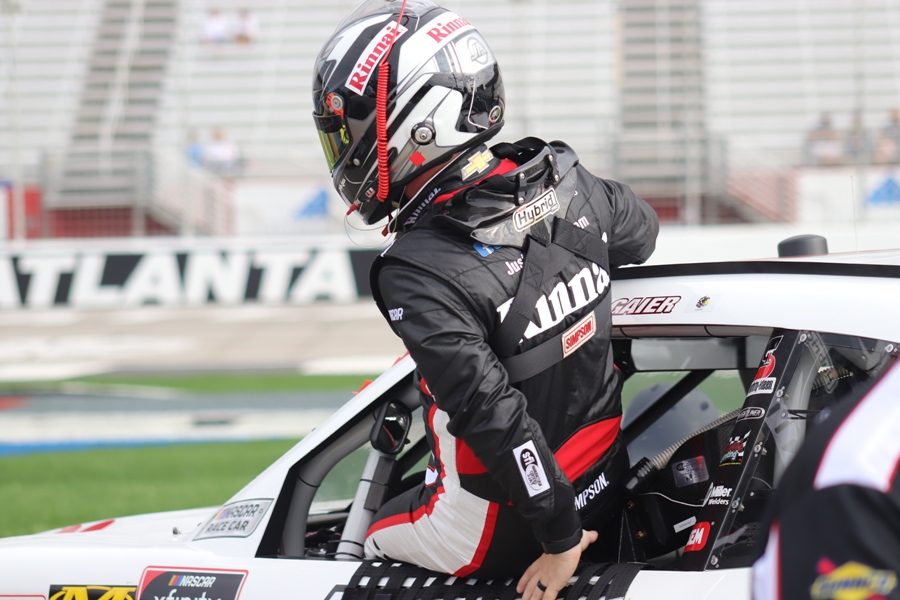 Justin Allgaier, driver of the No. 7 for JR Motorsports in the Xfinity Series, climbs into his race car for Saturday morning practice sessions at Atlanta Motor Speedway. Drivers are always thinking about what they can do during and after the race to stay safe and try to win.

There is a misconception that race car drivers simply turn left and go petal-to-the-metal for a couple hours, but there is a lot of thought that goes into not only driving in a NASCAR race but trying to win it. NASCAR drivers are always thinking of ways to find a competitive advantage while maintaining their health and safety. This slight edge over the competitors comes in several ways.

Due to the drivers losing 5- 10 pounds during a race as a result of the extreme heat, they must take careful consideration of what foods they are eating. “I’m not saying you have to stick to a strict diet but you definitely don’t want to eat fried foods the entire week,” Brandon Jones, driver of the No. 19 Joe Gibbs Racing Toyota in the Xfinity Series, said. “You try to eat real things and you try to eat things with water in them like fruits.”

The crew also helps to make sure there are multiple things to keep the driver cool like extra water bottles, helmet blowers, and multiple bags of cool air designed to slowly release throughout the race.

The driver’s body is also attempting to keep from over heating by sweating, but if the air is too humid the sweat cannot evaporate which will only make the driver uncomfortable. This is why the weather during the races is an important concern for the driver’s safety.

Weather also plays a role in the tire wear because rain will wash away the rubber on the track, making the track rougher so the tires wear down quicker. “So we’ve got a lot of history over the years that you know we can make some good decisions, but ultimately you have to make some adjustments on the fly because you just don’t realize how much the rain could impact the track surface,” David Ragan, driver of the No. 38 in the Monster Energy NASCAR Racing Series said.

Two tracks are well known for their rough, bumpy paving and while many drivers prefer the coarse track because it disrupts the usual pattern of the drive, others are tired of the outdated track. This has caused a heated debate between all of the NASCAR staff and drivers about whether to repave the Atlanta Motor Speedway track for the first time in more than 20 years.

The other famously bumpy track is the Kentucky Speedway, known for its bumps and grooves which give the track its character. “The track is rough. You’re really going to have your hands full trying to get a good package on your car to get through those bumps,” Clint Bowyer, driver of the No. 14 Stewart-Haas Racing Ford, said. “No one is going to bounce through them well, but you want to be able to bounce through them better than the next guy.”

While bumps in a track can make an interesting race, it can also be very dangerous. When the cars drive over bumps in the track at speeds over 160 miles per hour the car can lose traction with the track and potentially crash which is why the shock absorbers are extremely important in keeping the car steady.

The drivers must keep the their car steady so they can focus on moving up in position. “Your mind is always thinking about strategy and your competition, but mainly your car,” Ragan said.

The drivers are thoroughly trained on how to handle their cars while racing, but like any team with a coach, the driver has a crew chief. The crew chief’s job is to identify the improvements needed for the car to before the race. During the race it is their main priority to communicate with the driver about various strategies to get ahead.

Communication after the race is also an important part of being a NASCAR driver. The driver must know how to communicate to the public effectively and maintain a positive image for not only the driver but their sponsoring company. “Day-to-day I’m working on schedules, […] press releases and race events and recaps and stuff like that, so it’s a little bit of everything,” Matt Tifft’s Public Relations Director Kayla Darrell said.

There are a multitude of things that the driver has to take into consideration while driving at the considerable speed, all of which hopefully come together perfectly in order to win the race. To the untrained eye or uninformed on-looker, it may look like cars going in circles, but it’s much, much more than that.