From fat to fit

My life-changing, six-month journey toward fulfillment 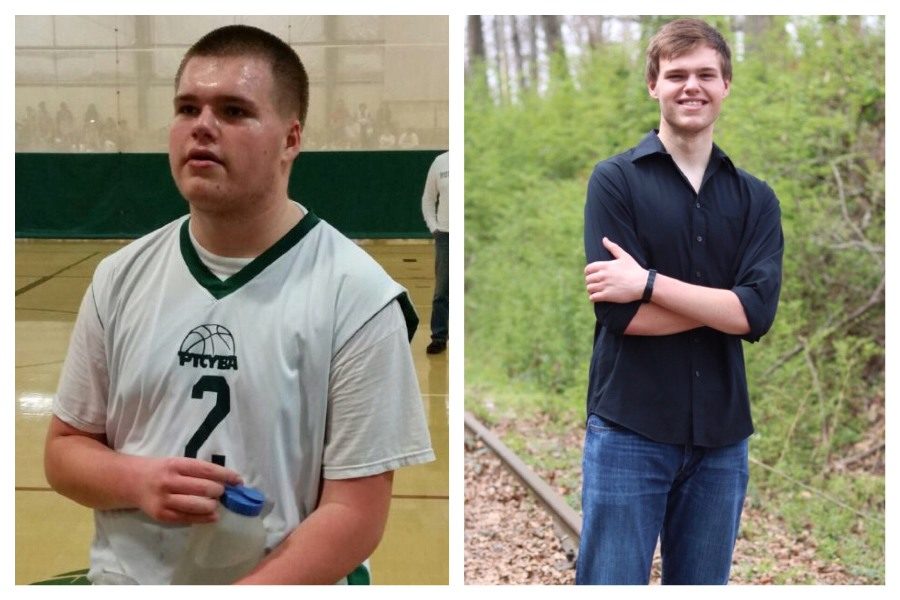 Before and after pictures of my weight loss journey. I maxed at 262 lbs. before deciding to lose the fat. I started in June 2017 and finished in February 2018, losing a total of 70 lbs.

The life of an obese high school student: Waking up tired every morning and not wanting to get out of bed to start the day. Looking in the mirror and feeling depressed about what is seen in its reflection. Watching people run with ease, wishing you could do the same. Going to bed realizing another day to do something about it all has been wasted. Not knowing how to get out of the hole that has been dug.

In June 2017, I weighed 262 pounds, which is classified as obese on the Body Mass Index. In addition, I had little to no muscle mass. I was well aware I was obese because I go to a public high school and own a mirror.

Being obese is an endless loop of suffering, and it’s difficult to come out of it. Eating eases the depression, anxiety, fat-shaming, and self-hatred. It digs a deeper hole every day, and the self-awareness becomes worse. I would wake up the next morning only for the cycle to begin again.

Haunted by the nightmares of obesity, I decided to break the cycle.

I started putting on the weight in the third grade. Bad diet and poor eating habits were part of my childhood. Going into high school was the first time I truly understood my situation, and that’s when I knew I had to change.

It took three years for me to really get up and do something about being overweight. There were many signals that I began to pick up in my daily life that I didn’t like. For example, I’d go upstairs and I would be out of breath, constantly hot, and unable to move. I didn’t have energy, and I just didn’t enjoy being alive. I never contemplated suicide, because I knew the preciousness of life and would never do that to my family, but I had no motivation to live my daily life.

As I started to think about my future and a career, I found a passion and a light that helped give me a start toward change. I want to be an actor, and the one thing I can’t be as an actor is self-conscious.

I can’t be focused on my body and wondering if it looks good while trying to perform a scene. Every movie I’d watch would serve as motivation to better myself. When I visited a set for the first time and experienced the life I wanted, I knew then I had to change. I also wanted to be athletic and move around with ease, which gave me even more motivation.

The biggest reason why I decided to lose the weight, though, was because I couldn’t even look at myself without being disgusted. There’s no such thing as self love when one is obese and everything feels like a hassle. After realizing what I needed to do, I surrounded myself with positive people who were there to help me. But my most important support came from myself, my attitude, and my desire for change.

The summer of 2017 was the summer I changed my life and began my journey. The week after school ended, I woke up every morning ready to grind. I lost weight with a combination of easy tricks.

During my fast, I only consumed grilled chicken, rice, and mixed vegetables. I stayed away from packaged foods and shopped in the produce section of the grocery store.

I also drank more than a gallon water every day and did the best I could at running. My initial goal was to complete at least two miles in one session, whether I would accomplish that goal by  jogging slowly, running, or sprinting. In Peachtree City, there many neighborhoods that are next to each other, so I created a two mile route that started and ended at my house.

After several months of running my route, I increased the intensity of my routine to make it a challenge for myself and for personal gain. I then began to crave seeing results, including becoming faster, so I amplified everything I did. Whether it was going hard to the rim playing street basketball, running my route, or even working out, I always gave it my all.

Combining all of these methods and being young made all of the fat I had fall off. Looking back on these past six months, losing weight was the easiest thing I’ve ever done.

Monitoring my progress and tracking the results consumed my thoughts to the point where they were all I thought about. Even though other people in my life could not see the results right away, I could. Seeing even the smallest changes further provided me with the encouragement to work harder and achieve a personal level of total body fitness I could be proud of.

After a solid month of being clean from junk food, everything about me became brighter. I felt lighter, more energetic, and ready to take on anything. My confidence, ambition, and spirits increased, and it felt wonderful.

Before my weight loss journey, everything was depressing, and now I feel on top of the world. Now I can officially say that I’m truly happy.