An insight into the world of sign language through Grace Forsberg 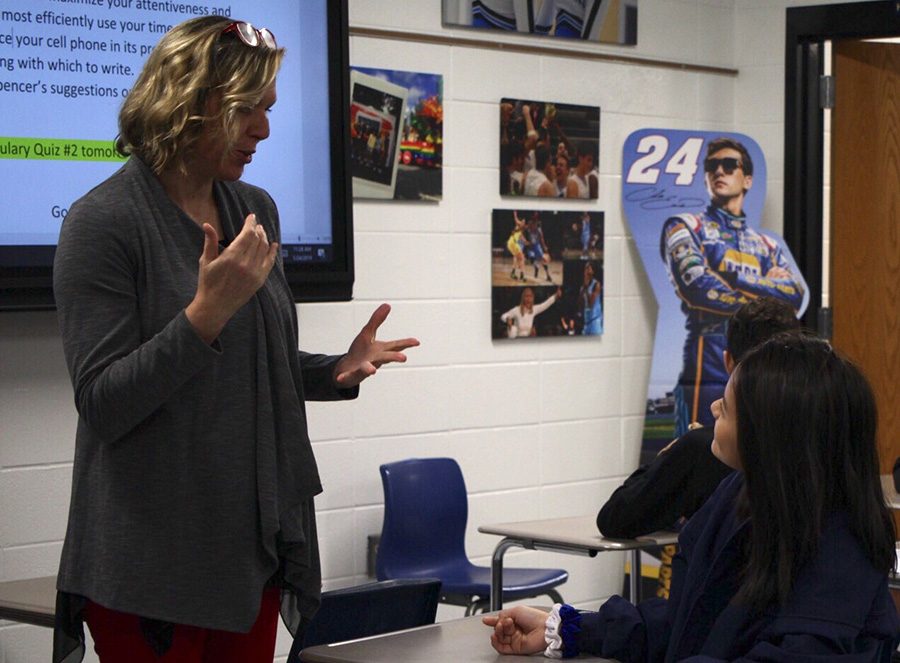 Christine Chatham and Grace Forsberg sign to one another before English class begins. Forsberg had not spoken her first full sentence until the age of eight, but now she can communicate through both sign language and English.

As infants and toddlers, major parts of a child’s brain grow and develop. It is vital that children of such a young age are exposed to language and people’s voices in order to develop good communication and social skills.

That aspect is why families are encouraged to read a lot to their young children. All of these things are fantastic influences for young ears to be exposed to, but what if their young ears can’t hear?

“There are four different levels of being deaf,” Forsberg said. “Mild, moderate, severe, profound. I’m profoundly deaf… I couldn’t hear any sounds at all.”

Forsberg was born in China and adopted at age two. Before she was three, Forsberg did not hear a single sound. It was not until she turned four that she would get her first cochlear implant for her left ear. Later, when Forsberg was six, she received an implant for her other ear.

Cochlear implants are like a prosthetic for the ear, which can allow people like Forsberg to hear. However, like all prosthetics, it is not perfect. Christine Chatham, one of the interpreters at Starr’s Mill, described it like a message over the intercom at an airline. A person may be able to hear it, and understand the message, but it can be difficult to hear exactly where it came from.

“It takes more energy to take in information visually than it does auditorily,” Chatham said. She explained how a student has to constantly be watching the interpreter’s hands, the paper or task being discussed, and reading the lips of others when an interpreter may not be around. It can be a lot.

Being in hallways filled with hundreds of students and numerous conversations, or in a super interactive English class, can be difficult to listen to. Having an interpreter in the classroom can help with that.

An interpreter makes the class more interesting and easier to pay attention to whether a student is deaf or hearing. Like in an English class, when going around the room and receiving feedback from students, Chatham can be found signing away, and letting Forsberg know which student is speaking.

On occasion, as teachers may be going throughout their lessons, they may say a ridiculous phrase just to see how something like that is signed. Times like these often result in an even more fun environment as Chatham may be laughing halfway through signing the sentence, causing Forsberg and others to laugh along as well.

Having an interpreter in the room makes the overall environment more engaging as students are paying attention to the teacher’s lesson but may also be watching the translation via sign language.

“Yes, I think it’s cool to see and sometimes learn some sign language signals in class,” sophomore Pace Robins said. “It’s brought a better respect for the people who learn it and communicate with it. Also, it made me more interested to learning more sign language myself.”

Subjects such as science can become difficult since there just are not signs for all of the lengthy terms used in that field. Forsberg, however, enjoys science. Physical science, last semester, was one of her highest grades.

Forsberg is also really strong in math. Being deaf, one has to heavily depend on being a visual learner, which can, like in Forsberg’s case, really help out in mathematics.

Aside from being a strong student, despite having not spoken her first full sentence until the age of eight, Forsberg is also extremely artistic. Art can also be heavily visual, which is perfect for Forsberg’s situation. She has steady hands and clever techniques for painting a starry night sky, with blurred clusters of stars, and silhouettes of trees in the foreground.

“I think I would say that I was a little girl fascinated by looking at artwork,” Forsberg said. “I started to take art lessons for a few years to improve my art skills such as drawings and paintings. I absolutely adore doing artwork. Art inspires me so much and it brings me happiness.”

Forsberg’s personality though does not just come through on canvas, but can also come through her hands as she signs.

Just like students’ handwriting and how personalities can come through to a teacher as they grade papers, personalities are also shown through the different ways a student may sign to their interpreter. These “handwritings” have been referred to as sign language “accents.” Chatham gives a great description of this as she watches students sign to her everyday and she responds.

“I think I love my job because I get to do it everyday,” Chatham said. “So like [Forsberg], like she has hands that are like they’re dancing. It’s so smooth, and so beautiful. So when I watch her, I learn how she signs specifically and then whereas another student maybe is a little bit more lazy in his signing and is kind of like he’s fast and skilled but they have different techniques.”

“Sign names” are also a unique way in which personality is portrayed through sign language. If a student is reading a piece of literature, or an interpreter is perhaps referencing numerous students in a classroom, no one is going to want to fingerspell out the names of characters or people over and over. So sign names are assigned.

In deaf culture, it is typically a custom that someone who is deaf or hard of hearing will give someone who is hearing a sign name. These names can consist of the initials of that person’s name, or a sign that means something regarding their personality. Sometimes numerous aspects are combined into one sign.

As interesting as sign language is, so few people actually know it. Interpreters in the classrooms though are an eye opener to others as it engages hearing students in an experience they’ve most likely never had before. Eventually it turns into a motivation to learn sign language, even if it’s something as simple as saying hello and introducing yourself.

“[Sign language] is fun, and it’s wonderful to interact with and socialize with,” Chatham stated.

However, with so few people knowing about sign language, it can make finding a career difficult. Nothing is holding one of Forsberg’s inspirations back from taking on a challenging career. Actress Sue Thomas, who is deaf, plays a federal agent in the television series “F.B.Eye.,” and would do her job while reading lips.

So far, Forsberg seems to have proven that she can do anything, as she has fought through her setback of a late beginning on the English language. Forsberg did not even start learning sign language until sixth grade.

Now she can communicate in either sign language or English and is thriving in academics. English is still one of her hardest subjects as the language has so many different tenses and words that are not necessarily in sign language, but like all students, she is learning.

Forsberg will be able to really show off what she has learned and how she has improved in the upcoming Academic Deaf Bowl. In the past, students from Starr’s Mill have made it to Nationals. This year, Forsberg and three other students will be competing. Out of the four going, two are deaf and two are hard of hearing, but their deficits won’t be holding them back.

Forsberg has also pushed herself to be able to help teach sign language, by helping lead American Sign Language club. Monthly meetings are held in room 816, and Forsberg leads the club along with a few other officers. Meetings typically begin after school and end at 4:30 p.m.

However, for those interested in taking sign language more regularly and thoroughly, there is an ASL class offered at Starr’s Mill that counts as world language credit. Currently there are two years of the class available, but it is being negotiated as to whether there should also be a third year.