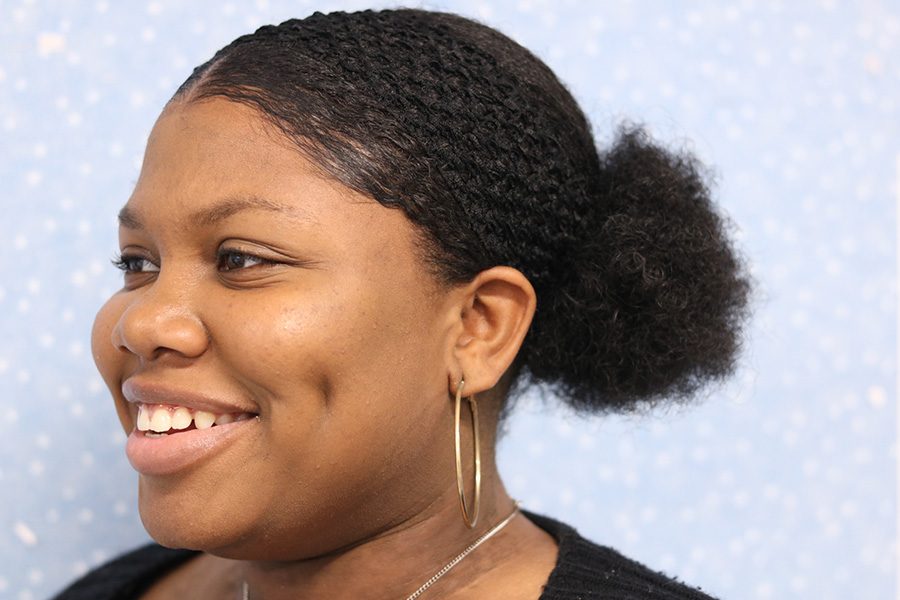 Last year I realized that straightening my hair is another form of oppression, so I decided to experience what it was like to only wear my hair naturally for a year. As a result of this, I was able to connect with myself and identify the kind of person I am.

For a while, I have been struggling with my identity.

It is hard living in a community that is majority white but having friends and family from a mostly black community. When I visit I am always questioned on if I am black enough. When I come back here, it is like I am being judged because I am too black. Sometimes it feels like I can never just be me.

As a consequence of this, over the past couple of years, I have had to figure out what kind of person I am, whether it is sometimes playing into some of those black stereotypes or embracing what it means to live in Peachtree City.

As part of my journey with my identity, I decided to learn more about my hair. Not the hair that gets straightened every two to three weeks, but the one that is naturally a thick, curly afro. I researched why so many black women get their hair permed, known as relaxed, and straightened, known as pressed, since I have always gotten it that way like all of the other black women I have grown up around.

I learned that getting a relaxer in your hair or getting it pressed was and still is being used as a form of oppression to get black women to fit into more of a European society.

With this new realization and the fascination with my natural hair, I decided to set off on a year-long challenge of not straightening or putting any kind of chemically straightening products in my hair.

This challenge for me started on April 3, 2018, just after Easter, and at first, it was not much of a challenge. Since every summer I get my hair braided, that year was no different. Then when school started up, I had crochet weave for about two weeks, and after that, it was back to braids for marching band season.

Considering I used braids as somewhat of a shortcut to this challenge for most of the first semester of school, my first experience with my natural hair was amazing. After I took out the braids, washed my hair, and styled it the way I wanted, I thought my hair looked incredible.

Though that did not stop the fears of how I thought my peers would react. From reactions I had read online with other women doing the same thing, I thought many would say my hair just looked like a nappy mess. However, when I went to school that day, it was the most compliments I had ever received for my hair.

Things did not end up getting harsh until the second semester when I did not have as many extracurriculars. At that point, I had to actually care for my hair myself.

Eventually, I was able to manage my hair, thanks to a natural hair salon in Atlanta. They told me more about my hair texture and what type of products I could and could not put in it. They also said that because of my hair being pressed all my life, and the heat damage it caused, I was not going to be able to get it as natural as it was when I was born.

Hearing this deeply hurt me, and because of it, trying to get most of my natural curl pattern back became the major reason to why I was doing this one year challenge.

In those last two weeks, I got into a routine of washing and twisting my hair the night before, then untwisting and letting it fall the day of school. No comb, no brush, some oil to make it look shiny, and that was it.

That weekend after April 3, 2019, when the year was up, I scheduled a hair appointment to get my hair straightened to see how long it had gotten. As the days got closer I became scared at the thought of losing my curls again and causing even more heat damage.

After I had gotten my hair pressed I felt weird, and the person I was looking at in the mirror did not feel like me anymore. It felt like a stranger, and I did not like it. That was when I promised myself I would not straighten my hair again unless I wanted to not because I felt like I had to.

For the girls who are thinking about doing this one year challenge or are just thinking about going natural in general, I would say definitely try it. It not only gives you a chance to truly see your natural hair but with the experience, you can learn so much about yourself.

My advice would be just to prepare and get to know your hair. Do some research, or go to someone who has experience with natural hair, because jumping right into it is not a good idea. Without preparing, you will not know what kind of products to use, and that could cause further damage.

Also keep in mind that just because you want to go natural does not mean it is easier to handle — in some ways it is actually kind of harder. Make sure you stay true. Do not give up just because people tell you they don’t like it or because it seems too difficult. If this is something you truly want to do, then do it.

Straightening your hair one time to see how long it has gotten does not mean it will go back to being completely damaged. Just keep your hair natural and do not press it repeatedly for an excessive amount of time, then your curl patterns will get better over time.

Even though at the beginning of the year I started out to see if I would like having natural hair, I have learned a lot about myself and the kind of person I am. I have learned that only I can identify myself.

Oppression by straightening hair has already started to change, so there is no need to be afraid anymore.