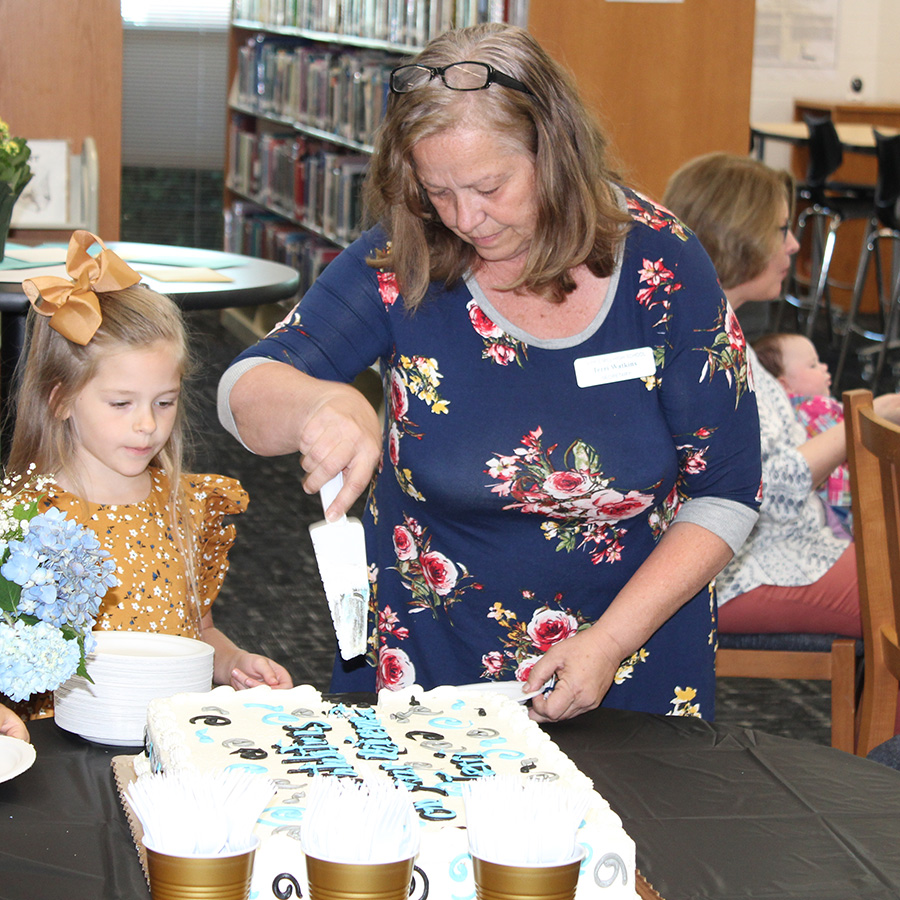 Athletic director secretary Terri Watkins cuts her retirement cake alongside one of her granddaughters. Watkins has been with Starr’s Mill High School since the day it first opened. Now, she’s getting ready to enter retirement and looks forward to spending more time with her kids and grandkids.

Secretary Terri Watkins is set to retire after 36 years of working for Fayette County, 22 of which have been at Starr’s Mill. Watkins was a founding faculty member.

Secretary Terri Watkins has been in the county since 1993, working as a moderate to severe exceptional children’s paraprofessional. She began at Oak Grove Elementary then transferred to Brooks Elementary as a first-grade paraprofessional until moving to Starr’s Mill in 1997.

During her time at the Mill, Watkins worked as an assistant principal secretary for seven to eight years before moving to work at the front desk for a couple of years. After front desk duty, she returned to her previous position, then started doing athletics only. From there she then worked as an assistant principal and an athletic director secretary before going straight back to athletics again.

“This had been my family,” Watkins said. “This is a family that I’ve had for twenty years, and it’s a little difficult leaving them, but I’m looking forward to the next stage. I think it’s going to be a lot of fun.”

Watkins’ story of how she got here is also quite the tale. At first she wanted to be a nurse, but with the way her schooling path set her up, it turned out she would only be doing paperwork and never get to actually work with the patients. That wasn’t what she wanted to do, so she left college and did apartment management for several years.

After that, Watkins moved on to the corporate world, dealing with import and export shipping. After she had kids, they didn’t like the long work hours she had to do, and Watkins found herself where she is now. Over the course of this time, Watkins had plenty of good memories, but one of her favorites is actually from Fayette County High School, a previous school she used to work for.

“We had a massive fight between the boys in the morning — fifteen to twenty boys. Dr. Chamberlain was the dean of the schools, but Mr. Sweat was the vice principal and he was the one that dealt with it,” Watkins said. “We thought it was over with, lunch came, and then the girls had a fight about the boys’ fight in the afternoon.”

Along with that memory, another fun recollection involves the old junior-senior fights that used to take place and involves a lot of whipped cream. This kind of playful and light chaos with children is something Watkins admires and is one of the things that she’ll greatly miss.

“I’ll miss the people, I’ll miss getting to see kids all the time, and the craziness,” Watkins said. “Just the camaraderie we have in the office. We know each other just walking down the halls. It’s been my life for twenty years.”

Watkins has done a lot for the Mill, and the Mill means a lot to her as well. The memories will always hold a special place in her heart and even as she says farewell, she has advice for students yet to walk through the halls of Starr’s Mill.

“Never be afraid to try what you want to try,” Watkins said. “That fear’s not worth it. You might succeed, which you’ll never know if you don’t try. Be proud that you’re a Panther, be proud that you have this school. You will see when you get out into the real world that what you thought was hard in here was probably the best days of your life.”

Like teacher Barbara Thornton, Watkins has been here since the beginning and looks forward to retirement, calling it bittersweet. Both love the environment and will miss it dearly, but also cannot wait to spend more time with each of their families.

Even after helping students for years, Watkins hopes to keep the helping attitude with her kids and grandkids as she takes the opportunity to be with them more often.