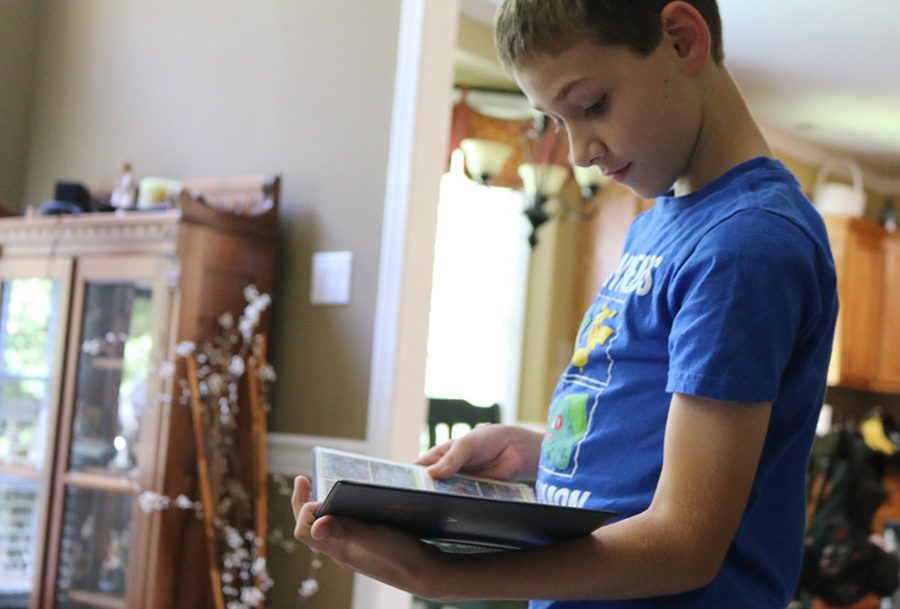 Evan Coe, only in fourth grade, is already faced with one of the most heartbreaking challenges — how to remember a loving father.

For Evan, remembering his father Allen, a 2006 graduate from Starr’s Mill, is a matter of like father, like son. Hundreds of Pokemon cards, toys, and characters leave behind favored memories and ease the ache that accompanies the death of his father.

“Allen had a very good sense of humor. He was very, very kind-hearted. If there was a stray person, or a stray dog, or a stray squirrel, or a stray possum, or a stray bird–how many birds did that boy ever pick up?” Allen’s mother, Charlene Coe said. “He carried that passion, and he passed a lot of that on to Evan.”

Last spring, the late Allen had surgery to remove his gallbladder. After several days of hospitalization, he was sent home. On May 18, he passed away in his sleep due to pneumonia. He left behind a son, Evan.

Allen used a hobby originating from his childhood to spend time with Evan. With every opportunity they had, Allen and his son would go wander around Fayetteville while playing Pokémon GO, talking, and bonding.

”Once Evan got interested, that really sparked Allen again,” Charlene said. “It renewed his love for it. So they both kind of connected each other back to it. He had introduced Evan. Evan took off with it.”

Evan, an energetic, cheerful, personal Pokémon encyclopedia, has autism spectrum disorder and attention deficit disorder. His passion and personality get to roam free in this social gaming platform where players benefit from connecting and working together, and where Allen connected with his son.

Pokémon being what makes Evan feel better about his father, his grandmother knows the importance of a PokémonGO partner for her grandson. Charlene notified local Fayetteville Pokémon GO community member Lyssa Beck of Allen’s death. From there, a message went out to the entire group asking if anyone would be willing to step in as Evan’s new PoGO friend and take him under their wing.

“Her reaching out to me was a surprise and a bit heartbreaking,” Lyssa Beck said. “I think that’s why Allen’s mom reached out to me, specifically, about trying to see if anyone would be willing to go raiding with Evan.”

The Fayetteville Pokémon GO community has been around since the release of the game in 2016 and is home to 805 local members.

“Initially the group was just for chatting about the game, catches, how the mechanics of the game worked and where to catch good stuff,” member and group administrator Alyssa Leonard said. “Once raids were introduced into the game, collaboration became a necessary part of the game… and the group really took off after that. It became incredibly active, with more people meeting in person because, to raid effectively, you had to.”

The group is extremely interactive. Within the past four weeks there have been over a thousand remarks, reactions, and reports. The time that has been invested into the group has made several closely knit friendships.

“One of my favorite things about the group is the community aspects. I remember the first Pokémon GO Fest. Our members meet up, played the game, had giveaways, and dressed up while we live stream GO Fest with lures up (in game item that increase Pokémon appearance rates),” member and group administrator Chase Leonard said.

Extensive and supportive social networks were nothing new to Allen. Beginning in high school, Allen was not only a part of the PALS Club, but was one of the people responsible for starting it.

“Allen has a special place in my heart as he did in so many others,” teacher Cindy Hartpence said. “He was one of the founding members and officers of Starr’s Mill High School’s PALS Club in 2006. This club is about fostering friendships among students with and without disabilities and being kind to others… He learned sign language so he could communicate with some friends that were deaf. This was Allen — a friend you never forget.”

So far almost twenty people from the group have already responded to take Evan out to raid and search for Pokémon, but have yet to meet for the first time. Because of this local community group, Evan Coe will be able to make new friends and new memories while cherishing the old.

In this instance, the Pokémon catchphrase applies to both its characters and Evan’s memories: “Gotta catch ‘em all!”