One mother’s journey to bring awareness 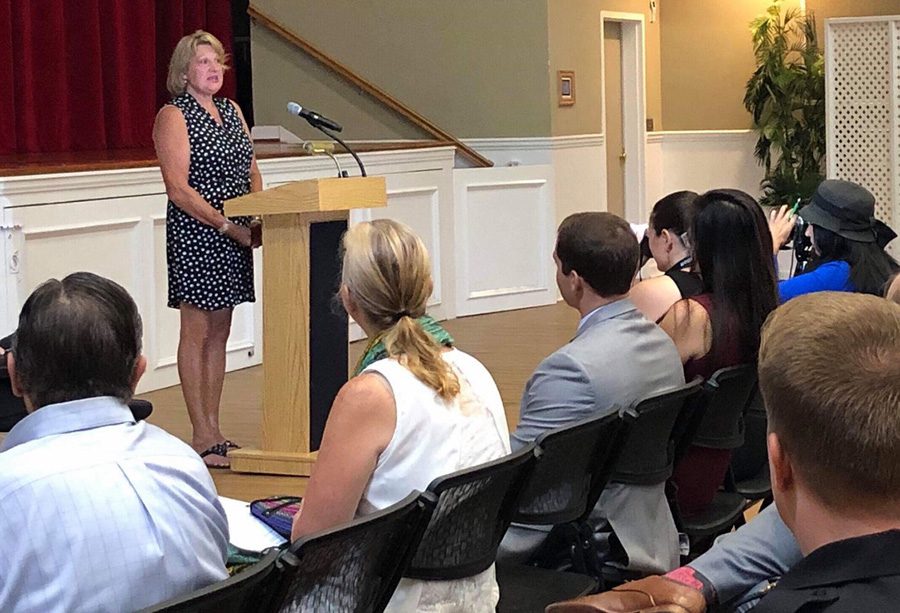 Doreen Barr spreads drug awareness anywhere that she will be allowed to speak. After losing her son to heroin laced with fentanyl, Barr wants to do everything she can to save others’ lives.

Tens of thousands of deaths are claimed by drug overdoses, and the statistics seem to increase every year. Deaths like these have to come to a stop, for even one life taken is too many, especially for a mother who lost her child because of addiction.

Doreen Barr has been campaigning for awareness and prevention, like Red Ribbon Week does nationwide, but has been taking her stand in public schools. Having lost her son, Ryan Barr, to heroin laced with fentanyl, this subject holds a very personal soft spot in her heart.

Starr’s Mill alumnus Ryan Barr graduated with honors and went on to college to play football. During his junior year of college, an injury resulted in Ryan needing a pin for his hand, and the doctors prescribed oxycontin to help reduce pain. Oxycontin is known to help relieve moderate to severe pain, but is unfortunately also extremely easy to become addicted to, and is therefore highly monitored. The doctors prescribed this to him for two years.

After Ryan graduated from college, he stepped out and confessed to his parents that he was addicted.

“So basically the doctors turned him into an addict,” Doreen said. “I mean we had no idea. He was a functioning addict, held down a full-time job, and you know, we had no idea until he came and told us in 2012 that he had a problem.”

From here, his parents immediately put him into rehab. After Ryan’s 90 days, he was released from the rehab center but unfortunately had to return a year later. It wouldn’t be until he was released a second time, that he would be clean for seven months before discovering the drugs that would be laced with lethal fentanyl.

“A couple months ago, they seized enough fentanyl coming in from China that was enough to kill every member of the United States,” Doreen said.

Other shocking news revealed to Barr was the fact that drug dealers deliver. Even with Ryan’s mother home as she quit her job to be there for support, Ryan had his moments when he would fall back into his addiction. Having been to rehab and being under watch doesn’t change hardly anything when all it takes is a simple bag swap for a dealer to come to an individual’s home. A dealer that the Barr family will never forget, known as Monty, would be forever labeled as the one to have delivered Ryan to his fentanyl fate.

Ryan died on May 21, 2015, three years after admitting to his parents that he had a problem. It would be the first time that Doreen would tell others about her son’s problem as well, needing close comfort.

“I was your poster child for stigma,” Doreen said. “I didn’t tell anybody. You know, I was embarrassed, I was ashamed, I was angry, I was mad. I couldn’t believe that my son was an addict who graduated from Starr’s Mill, and we lived in Peachtree City, and that this had happened.”

Unfortunately for the Barr family, even living in Peachtree City couldn’t prevent a run in with the dangers of drugs. Monty, the drug dealer that sold to Ryan, was eventually arrested by the GBI and Monty was taken to court. Doreen says that he never once apologized for her son’s death, never once looked their way. He ended up taking a six-year plea deal to spend time in prison for the death of Ryan, but he was released last June — having only served three years.

Though there is an underlying fear as he knows where the Barrs are located, nothing can keep Doreen quiet from teaching others. Doreen now speaks to hundreds about Ryan and his story in the hopes of saving even just one life.

Doreen has since worked countless hours on her journey to teaching other parents and students alike about the dangers of drug addiction. She has spoken in numerous schools including Starr’s Mill, Rising Starr, Whitewater, Sandy Creek, Heritage, and even a private school in Coweta County. Her speeches help to put into perspective just how lethal drugs can be, especially fentanyl.

“Fentanyl is a synthetic opioid that hospitals usually use for end of life patients to keep them comfortable,” Doreen said. “The amount of fentanyl — the size of a grain of salt — is enough to kill you.”

Because of this significant statistic, Doreen heavily emphasizes that even today, with the widespread vaping issue, kids simply don’t know what they’re inhaling when they vape. Traces of fentanyl are being found in several other drugs like marijuana and cocaine, and there is no way to tell what might also be in a vape. No addictive substance like that is safe, whether or not it has nicotine. It only takes one time to kill.

“I stress to the kids that ‘You are important, and you matter, and you are special. And if you don’t think so, think what would happen to your parents, or your grandparents, or your siblings if something happened to you’,” Doreen said.

Doreen knows of three people on Ryan’s football team that have died from an overdose, and she can list 17 people from Starr’s Mill, McIntosh, and Whitewater that have all lost their lives as well to overdose. One student’s lost life is already too much, and as Barr goes on her crusade to prevent any more, she’ll speak wherever she can. In school auditoriums or classrooms, students tend to be very responsive and interactive, oftentimes giving Doreen hugs at the end.

Eventually Doreen would also like to hand out wristbands to the students she speaks to.

The Barr family’s organization was officially pronounced a non-profit agency on June 6, 2019. Even though having just begun, Barr’s hard work of outreach is already seeing results with their first client.

“It’s a non-profit foundation that specializes in drug education, awareness, prevention, recovery,” Doreen said. “I’ve spoken in school’s, DFW’s, rotary clubs, the attorney general of Georgia, Chris Carr, invited me to be on his statewide opioid task force. I have other engagements in Charleston, and anybody who contacts me, I’ll go there and speak, and tell Ryan’s story.”

Having required nearly 30 pages of IRS paperwork, Doreen had to hire an accountant to just begin to understand the terminology and an attorney to file the documents through Georgia. As no one is getting paid a cent to do what they do, this organization is based upon pure dedication to saving lives. The facts point to a staggering amount of lives lost to overdoses, and all of the work done In Ryan’s Name, Inc. is pushing toward lowering that number.

A Ribbon Tree, having just been planted this year, is also one more thing that Doreen’s organization has started to bring awareness.

At the Center Square in Fayetteville, a purple flowering crape myrtle tree and a marble plaque has been donated and is decorated with purple ribbons bearing the names of those lost to overdose.

“We know now that there is no cure for addiction, and it’s something that you live with everyday,” Doreen said. “One bad choice can kill you.”

Aug. 31 is International Overdose Awareness Day, and around 68 people gathered this year to tie ribbons on this tree. Every year, Doreen hopes to do something with this tree, gathering people and having a sort of memorial moment for those lost. Currently, the tree and ribbons are still up and Doreen goes frequently to give it water.

This year, Doreen will be speaking at Sandy Creek High School for Red Ribbon Week. The annual week dedicated to bringing drug awareness nationwide is scheduled for Oct. 25-Nov. 1.