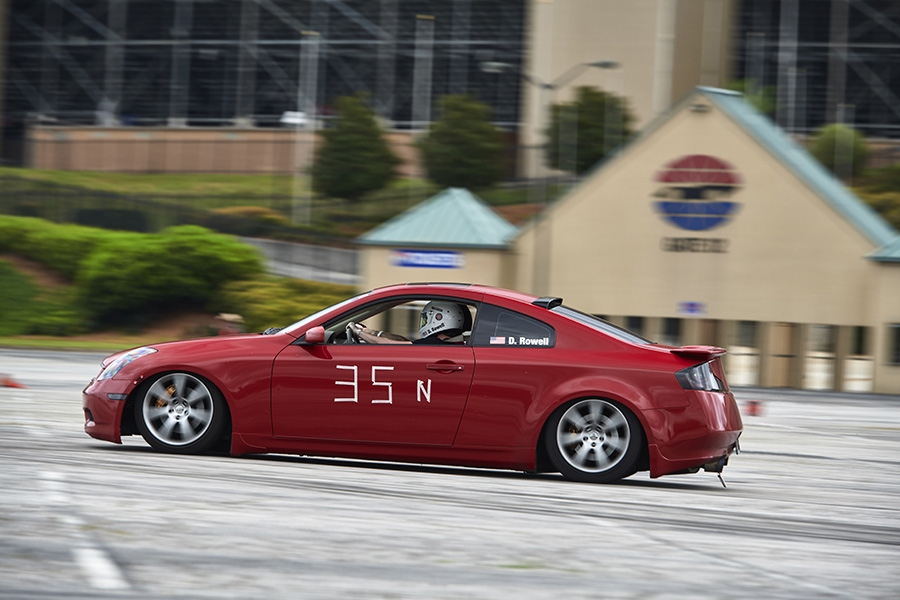 Senior Dean Rowell participates in an autocross event at Atlanta Motor Speedway. “It’s a motor sport that emphasizes driver skill and agility more than power or speed,” Rowell said. Though his car, a 2004 Infiniti G35 coupe, is used for agility events, it can reach a top speed of 155 miles per hour.

Senior Dean Rowell has taken his interest in cars beyond bragging rights in the student parking lot.

Having made some modifications to his 2004 Infiniti G35 coupe, Rowell competes in autocross events on agility courses. These events are held in the parking lot of Atlanta Motor Speedway and are a relatively popular proceeding, gathering large groups of people with a common love for cars and motorsports.

“I feel like a lot of people aspire to have Beamers, Benzes, or Lamborghinis,” Rowell said. “I’m not really that type. My dream car is a BMW M3. Not a new one or anything. I want a mid 2000s one. Those are just my favorite cars of all time.”

Rowell got his car during sophomore year and became a car fanatic due to a friend. Modifications made to the exhaust, suspension, and wheels were all made by himself through self-taught mechanical skills. And though his car doesn’t have the best acceleration, it can top out at 155 miles per hour. Despite this impressive speed, though, it’s the agility autocross course that appeals to Rowell.

“I really do enjoy that autocross thing and that’s all I see myself doing within the near future,” Rowell said. “But, eventually, I’d like to get on a race track doing some track day type events.”

Aside from the official events, Rowell also takes his car to some local car meets. These meets bring together a wide variety of people with the common intrigue of cars where they can converse together about them. It creates an enjoyable atmosphere for car lovers.

“The community behind the whole car scene,” Rowell said is what he enjoys most about cars. “And I just like the challenge that keeping that car in good shape means. I’ve spent a lot of hours working on that car, working to pay for that car, and I’m proud of how far it’s come.”