Broccoli beneath the ice cream 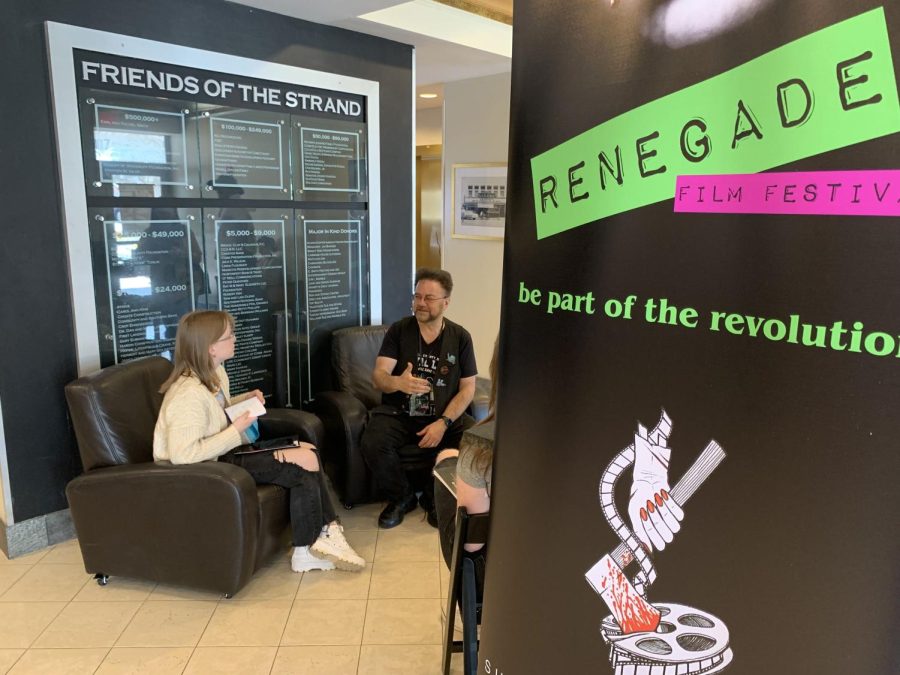 Staff Writer Mary Davis sits with writer and director Adam Marcus at the Renegade Film Festival in Marietta. Horror movies have been around for years and as the world changes, the horror genre is forced to change with it. Almost every horror film touches on real-world topics in one way or another. They bring taboo topics to light and force people to talk about them, allowing others who struggle with these topics to feel safe in even the scariest movies.

Although the horror genre is vast, almost all of its movies tend to circle back to one central idea: real-world events. Many horror films have touched on the true horrors in the real world and brought awareness to topics that not many people want to talk about, allowing people to find comfort in even the scariest films.

“The great thing about horror is that we can convince an audience we’re giving them a bowl full of ice cream,” writer and director Adam Marcus said. “However, there’s broccoli at the bottom of it, and they don’t know they’re eating broccoli because they’re on a sugar high from the ice cream.”

In one way, it might seem that these movies are unrealistic or make fun of the human population for their reactions toward events in the real world. But in another way, the horror genre can be viewed as emphasizing the true horrors in the real world and making people talk about them.

Many movies explore these topics in a subtle way to their audiences. The original “Night of the Living Dead” (1968) is a classic zombie horror film, commonly seen as the first modern zombie horror film. However, the underlying theme, or the “broccoli underneath the ice cream,” is that director George Romero is actually talking about the Vietnam War and the Civil Rights Movement during the late ‘60s.

“Everybody thinks George Romero made a movie about zombies, but he didn’t,” Marcus said. “George Romero is literally hitting two major outposts of the political structure of the system he lived in at the time and no one ever noticed that he was doing it.”

The original “Dawn of the Dead” (1978) touched on themes of consumerism and its suffocating effect on Americans. “Rosemary’s Baby” (1968) explored themes of paranoia and distrust, themes prevalent in society in the ‘50s and ‘60s. These themes continued into the ‘70s once the famous Manson murders came to light.

The Renegade Film Festival has been around for five years, solely featuring short films, and some feature films, falling under the horror/thriller genre. Like all horror films, most short films from the festival touched on real-world horrors and broached taboo topics like sexual assault.

“I think people know and expect horror to kind of push the envelope,” festival director Vanessa Ionta Wright said. “It makes it more acceptable to be able to go to those places and challenge those themes and challenge the audience.”

The first block of films for Friday was experimental/arthouse films. The first short film, “Don’t Go Outside” by independent filmmaker Natasha Halevi, touched on isolation and the fear of going outside. After a pandemic that rocked the world and changed the lives of everyone around us, people were left confused and unable to connect with others.

Halevi uses the desert setting to heighten that feeling of isolation and confusion. The vastness and discomfort of the desert paired with the warm colors and beautiful paintings of “fake comfort” makes the audience feel slightly on edge. Something doesn’t belong or it feels fragile and unfinished.

“Even from the photos I saw of some of the paintings, there was something so eerie about it,” Halevi said. “It doesn’t really belong in the desert, so you don’t trust it.”

She turned that feeling of dread into art, a feeling that millions of others are continuing to struggle with as the pandemic continues. Many horror movies, whether they be short films or not, always have that element of exploring real-world events and fears through horror.

“The Catharsis Block” dealt with themes of sexual assault. Sexual assault has been a largely taboo topic. This resulted in many victims feeling ashamed and unable to talk about their situation.

However, in the past couple of years, sexual assault has had a larger presence in media, bringing attention to the topic. It became less taboo and let people know that they had support in their situation.

One film from the “Catharsis Block” was titled “Scales.” The main premise of the film dealt with the theme of consent. After one of the leading characters gets sexually assaulted, scales appear on her face. However, no one else can see them besides other victims of sexual assault. The scales are essentially a visible scar so other victims know that they are not alone.

Another film titled “Grummy” dealt with an underlying theme of parental sexual assault. The film starts out with a young girl in her bedroom with her stuffed animal. They travel through their imagination and end up in a “safe-haven” with Grummy keeping her safe.

Eventually her dad comes in and scolds the girl for being too old for wetting the bed. The girl becomes terrified and the audience sees that something is wrong and, once he grabs her, the audience finally comes to the realization that the father has been sexually assaulting his daughter.

“I think the important thing is that those conversations do get started and we can talk about the things that are horrible in a safe way,” Wright said.

As such a hard topic to talk about, the director showcased that coping mechanism through the girl’s eyes. The young girl uses fantasy as a way to deal with problems she does not fully understand yet.

“You’re talking about filmmakers who are now speaking about stuff that’s really in our faces,” Marcus said. “They’re challenging what’s in our faces, using the horror genre to do it.”

As the world continues to change, the horror genre is forced to change with it. However, one thing that never changes is the horror genre’s ability to take real-world events and taboo topics and shove them into the audience’s faces.

These films force people to talk about uncomfortable topics and come face to face with the true horrors of the real world, forcing their audiences to pay attention to the broccoli beneath the ice cream.