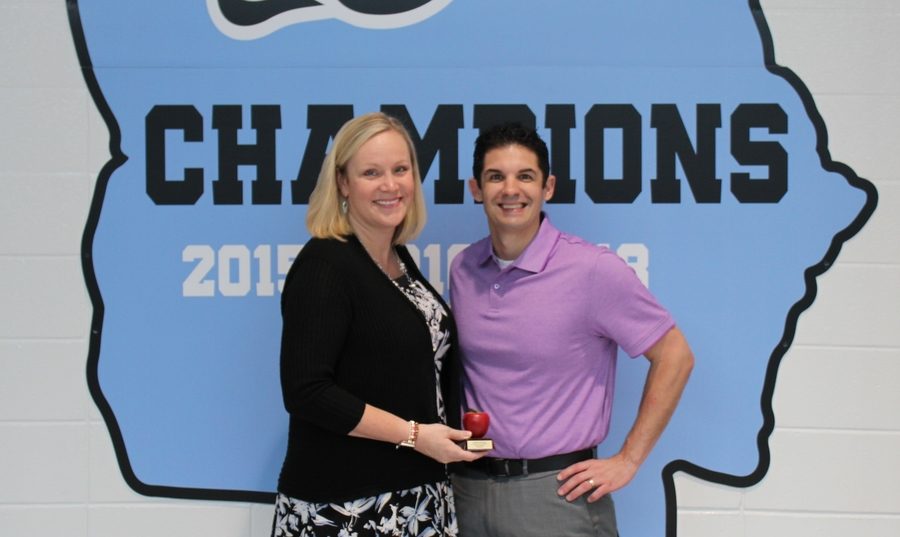 Assistant principal Brandi Meeks has been selected as this month’s Golden Apple winner presented by Tim Monihan and Farmers Insurance.

Meeks has always wanted to be a teacher and has spent 22 years teaching, this being the first year she has been an assistant principal. Because of her perspective as both an administrator and a teacher, she is able to work well with both students and co-workers.

“I think that she has a lot of really beautiful character traits,” previous Golden Apple winner Lela Crowder said. “I think that she is a superb educator when she was in the classroom, and, as an administrator, I think she’s empathetic towards both teachers and students. She’s been kind to me personally, but even more importantly I’ve seen her be kind to students.”

When Meeks was a teacher, she taught Spanish. Her inspiration for becoming a teacher began with her mother, but her interest in the language began when she was in high school. She had a job at a restaurant where two of her fellow workers only spoke Spanish.

Her co-workers wanted to learn her language, so eventually she was teaching them English while they taught her Spanish. Meeks grew to see Spanish as a way to bring people closer together.

“Spanish is a lot of fun though. You can do a lot with it. Not just with people, but in the classroom,” Meeks said. “You can kind of be elementary with it and play games, and sing songs, and eat food.”

Meeks not only kept her classroom in a fun environment, but it was also one where students could really learn and understand what they were being introduced to.

“You can be a great person, but in order to be an effective teacher, you have to effectively be able to pass on the content — the subject matter — that you’re teaching to your students,” Crowder said.

This year, however, instead of being in the classroom, she has been involved with organizing the Georgia Milestone testing, the Governor’s Honors Program, and graduation.

“[My inspiration is] just the joy of watching you guys,” Meeks said. “The relationships that you form, the connections that you make, and then to see y’all later and what you’ve accomplished. It’s always been a joy for me.”

Meeks’ kindness and love for teaching has brought her this far in her career, and others who look closely can see that.

It all began with her mother and a restaurant that brought her to the classroom. Now she is the assistant principal receiving the final Golden Apple award of the 2018-2019 school year.