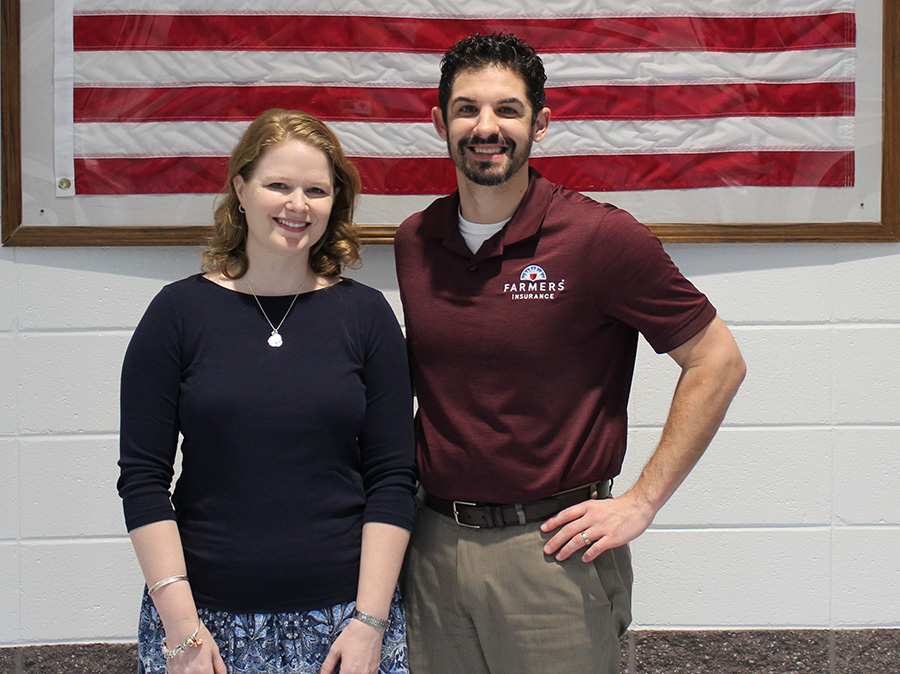 Rebecca Rickeard, pictured with Tim Monihan from Farmers Insurance, is last month’s Golden Apple recipient. Rickeard tries to make the effort to show compassion toward her students and really get to know them. Having not only traveled far in her career, she has also traveled far in the world as so far she has traveled to 20 different countries.

Government and AP European history teacher Rebecca Rickeard is December’s Golden Apple recipient. She has been teaching for 21 years. She graduated with her degree in history from Mercer University and earned her Masters of Science and Administration from Central Michigan University.

Rickeard always knew she wanted to be a teacher as she’s had some influential people in her life, including her mom who was a teacher and her tenth grade history teacher.

Originally, Rickeard had the intention of becoming a chemistry teacher but quickly changed her mind and opted for history. She lived in a military family as she was growing up and loved historical aspects to all of the places they lived in so going the route of history, teaching its stories, and learning from its mistakes and triumphs, made perfect sense.

“I always try to teach my students that human nature never changes, and that’s why we learn the lessons of the past,” Rickeard said.

Rickeard shares her passion for history with her students and always tries to show that what took place hundreds of years ago influences what happens today. Even though Rickeard relays the events of the past, she tries to show that it is very much an applicable subject to the present day.

“I love that [history is] fascinating, ultimately it’s just a bunch of stories,” Rickeard said. “And we all love stories. But I like that it’s so relevant, especially if you look at what all is going on now in the world, and current events. If you understand past events, it helps make current events a little more understandable. So [history is] really one of the most relevant subjects there is.”

Building friendships with the students is also something Rickeard values. She tries to keep in mind the fact that one can never know what another person is going through, so she puts in the effort to make connections with her students. Some of her favorite moments with her students though happen when they connect the dots.

“I really like it when you see kids make connections and they see how what happened in the past influences today,” Rickeard said. “Or they see trends from the past and they see that being repeated today. So just from a teacher point of view that’s a really neat moment when it clicks for them.”

In addition to Rickeard’s heart for kids, she has a heart for travel. She has been to 20 different countries so far and will be traveling to number 21 this year on the Iceland trip. Out of all of the countries she’s been to though, Italy remains her favorite.

“Just the history and the art, I love art,” Rickeard said. “And so being in the birthplace of the Renaissance is pretty amazing.”

Throughout all of her travels though, Rickeard has had some interesting and exciting experiences. Some being having eaten guinea pigs in Peru, sneaking into an art museum in Orvieto, Italy, to see Atruscan tombs, shattered her finger in Turkey, sliced her legs down to the bone due to a rock-climbing incident in Turkey, and has hitchhiked in Turkey but does not recommend it. Rickeard has also met scores of interesting people across the globe including the oldest man in a village who had fought in five wars against Russia.

Though Rickeard has traveled far in the world, she has also traveled far in her career. As December’s Golden Apple recipient Rickeard receives $100 toward something school-related, which she plans to put toward supplies and resources for history club.