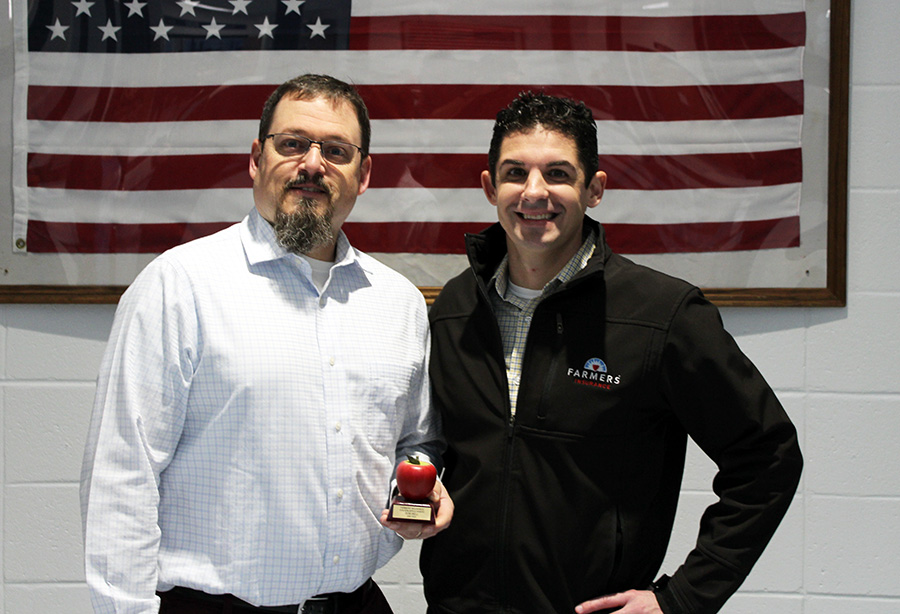 Timothy Monihan and Farmers Insurance recognize Rob Bell as January’s Golden Apple Award recipient. Bell has brought growth to his program and the robotics club, and is passionate about biking against child abuse. December’s recipient Rebecca Rickeard selected Bell for the award.

Bell has taught in Fayette County for 16 years and has recently transferred from Sandy Creek High School. Bell attended St. Francis University for his undergraduate degree in elementary special education and a master’s in math. He also received a specialist’s degree in instructional technology from West Georgia.

“[Bell has] brought a lot of new life into the [technology] program,” Rickeard said. “He has made students really excited for what he plans to do, and he’s already seen a lot of success with the robotics club.”

Bell facilitates student learning, so students are allowed to explore the content. He gives them a problem, then proceeds to guide them to a solution. In class every day, Bell loves the aspect that his students are excited about learning, being hands-on, and can tackle any obstacle.

“It’s absolutely never the same every day,” Bell said. “You can’t copy the answers because there are different ways to get to the solution.”

Bell’s position allows him to give “traffic directions” with a rigid flexibility that not many classes offer. He prides himself on being strict, but fair.

Mrs. Holtz, Bell’s first-grade teacher, and Dr. Gant, his undergraduate education professor, serve as his main role models for teaching. They modeled the personal aspect of learning, something Bell values.

“They took a personal interest in me and helped me to understand that I could accomplish whatever I wanted to,” Bell said.

Bell is not only passionate about his students, but is a supporter of Bikers Against Child Abuse. He bikes for abused children and empowers suffering kids. He also loves the outdoors and he often goes camping with his wife and three children.

Courtesy of Tim Monihan and Farmers Insurance, Bell receives $100 to use in his classroom, which will be used for sandpaper, electrical cords, and additional school supplies.