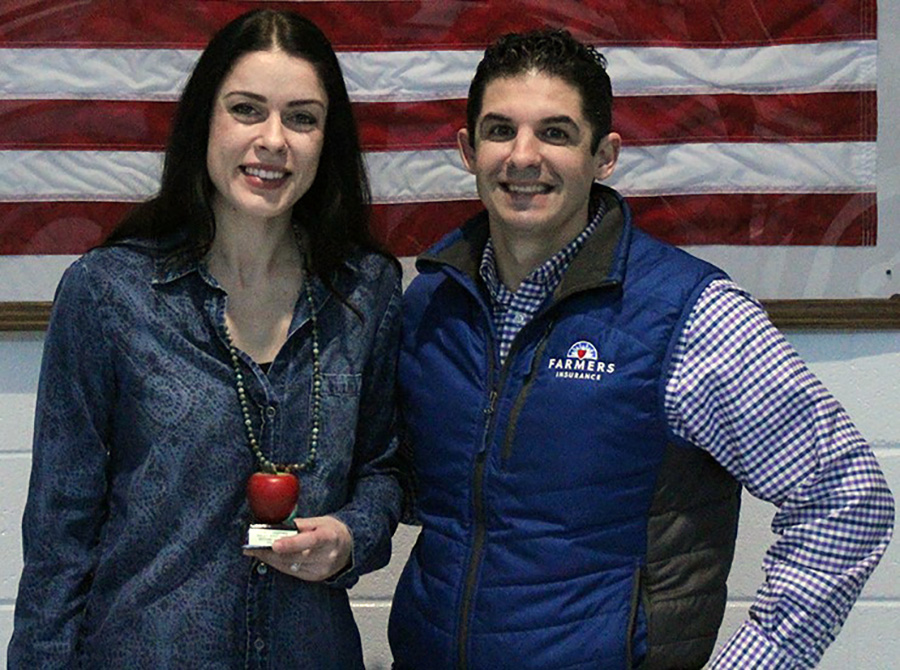 German and dance teacher Antonlea Brkic stands with Tim Monihan of Farmers Insurance. Farmers Insurance sponsors Golden Apple and awards each winner with $100 to use to benefit their classroom.

Born in Croatia, but grew up in Germany, Brkic has always been influenced by German culture. Although she attended college in the States, Brkic studied abroad for a year in Switzerland and continued her studies. Brkic attended the University of Georgia where she earned a bachelor’s degree in German and Foreign Language Education.

Brkic is now in her eighth year of teaching and always knew that she wanted to pursue a career related to languages.

“It was during my first or second year of college where I really figured out that I wanted to pursue teaching and I realized that I enjoyed doing it,” Brkic said.

Teaching all four levels of German, Brkic always finds ways to keep the classroom interesting and entertaining while educational.

“I think it has to be a mixture of doing fun cultural things also having challenging things such as class discussions and doing a lot of paired work, showing clips, doing readings,” Brkic said. “It can never be the same thing every day.”

As the dance teacher Brkic teaches students with all different skill levels but makes the class interactive for all. She has prior experience in dance and still actively takes ballet classes. Brkic also helps choreograph routines for the school musical.

Each Golden Apple winner is awarded $100 to use toward improving their classroom and instruction. Brkic plans to use the money to buy more German DVDs.