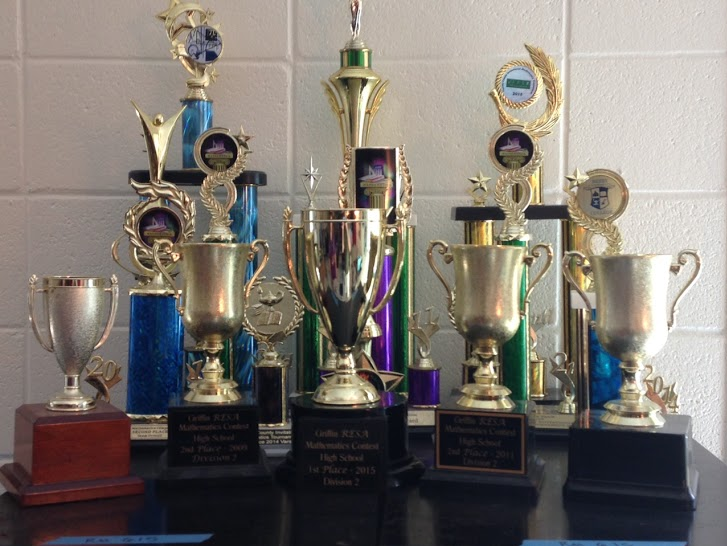 Math Team coach Wendy Willoughby displays numerous trophies from the team’s previous victories. The team added to this collection last year with a first-place victory at the Griffin RESA tournament.

Campbell, coaching the varsity team, and Willoughby, coaching the junior varsity team, look forward to this season with high expectations. “We are going to have a very strong varsity team,” Willoughby said. “There are many returning members.” Although they lost 2014-15 seniors Tom Zhao, Rocky Zu, Kevin Hilinski and Alex Casado, the two coaches have strong confidence in their 2015-16 members to reach the team’s goals.

The math team’s success heavily relies on its efficient practice sessions. Campbell and Willoughby offer the team members problems from past tests at tournaments. “If we are going to a specific competition with older tests available, we will complete the questions to get a feel of what we will be faced with,” Willoughby said.

Each player has his or her own mathematical specialty, be it critical thinking, creativity, or number crunching. Despite these differences, the members do possess a common quality. “The players must have a love of math,” Campbell said. “It’s the love of figuring stuff out that drives them.” Team members Joshua Tysor, Ricky Macke, and Maria Curry are prominent members of the team and share the love of math.

Senior Ricky Macke exemplifies this quality. He has been a member since freshman year and has progressed mathematically over the years. “Math team has helped me through offering me the opportunity to complete math problems of a higher level,” Macke said. “It benefits me in many ways.”

Junior Jocelyn Gao, who joined her sophomore year, wishes to remain a member throughout high school. She describes the math team as “a different experience than the math class on everyone’s schedule. It has taught me to think of different and more efficient methods to solve problems.”

Campbell has coached math team for three years and Willoughby for nine years, and they enjoy every season as much as the last. “We enjoy learning from the students,” Willoughby said. “They figure out shortcuts and share it with everybody.” The coaches anticipate another exciting season and plan on preparing their members to reach their full potential.