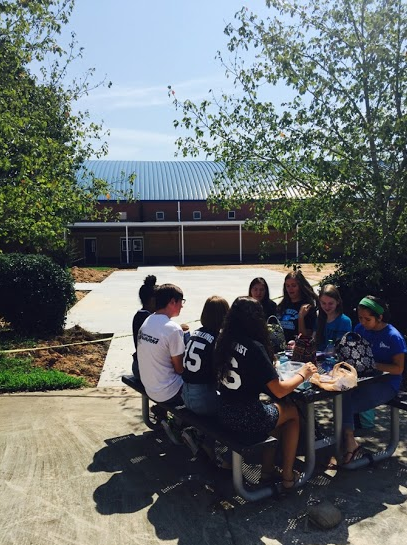 The new patio will be open for the students to use within the next couple weeks. It’s located next to the existing eating area outside the cafeteria.

Starr’s Mill’s ruined deck is currently being replaced with a new patio section. Fayette County maintenance workers completed paving on Aug. 12. “I am really excited to sit and eat lunch with my friends on the patio,” junior Karissa Quame said.

This patio found its funding in an age-old tradition. Every year the Starr’s Mill senior class gives a gift if there is still money left from their class after they graduate. The 2014 class officers had no designated plan for the money left over, so the administration spent the money for them. “This is coming from funds of class of 2014,” Principal Allen Leonard said, “so it was a gift from class of 2014.”

During the 2014 holiday break, former principal Audrey Toney and Leonard, who was in charge of facilities at the time, started discussing areas of need. They looked over places that would be valuable to the student body. They decided the old deck next to the student eating area outside the cafeteria needed attention.

The deck had been built by a Boy Scout Club about 12 years ago, but it had grown old and fallen into disrepair. The area has needed maintenance for some years, so the administration decided it was time for an adjustment.

“The wooden deck had became unsafe,” Leonard said. Leonard and Toney wanted to find a replacement more sustainable for the student-body eating area.

Leonard and Toney looked for advice from and suggestions from contractors on what they should do with the space. They discussed repairing it, but they received quotes from three different private contractors saying that it would cost at least $20,000.

This price was out of their budget, so they decided to make a new patio section instead, which would cost $8,000.

Leonard and Toney wanted to work on the project during the 2014-15 school year, but it was delayed. “Both the weather and the availability of facility services, who have a bunch of projects they have to do in numerous places, held the project back,” Leonard said.

In early March of 2015, the Starr’s Mill football team tore down the deck for the school and cleared the area for the project to start again. “The team tore down the patio for a strength training activity with tools and muscles,” Leonard said.

The two planned for the project to be done before the students came back for the 2015-16 school year. Even though the county was glad to do the project for the school, the Fayette facility service became busy again.

“For the county the project was a [want], not a need, which is understandable,” Leonard said. “If the choice was between a classroom where the kids were going to be sitting in and didn’t have a roof, they’re going to do that classroom first, now that’s a need. A really nice place for kids to sit at Starr’s Mill is a want.”

The facility service came to work on the project a couple days into the school year and was able to pave the entire area. “We’re trying to minimize the maintenance so the concrete patio would be more sustainable and safer once the landscaping is figured out,” Leonard said.

The only phase left to do is add tables for the students and finish the landscaping. It’ll have at least 5-8 round tables and be able to hold 40-50 students.

The patio should be available for access to the students after the landscaping is finished and the tables have been delivered to the school. “I expect it to turn out really nice,” Leonard said.