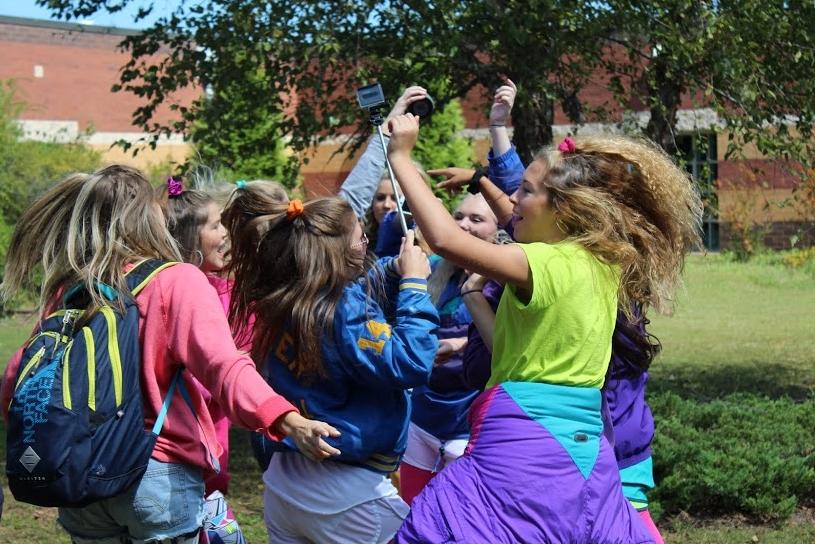 Sept. 17, 2015 - The seniors keep their annual tradition of the dance party going even though the 10-minute break no longer exists. These seniors took the opportunity in between classes to demonstrate their best dance moves from the ‘80s.

“I was all emotional and wrapped up in the moment,” said Nicole Moore, a learning specialist who works with the English department. “I feel so connected with the students, and I hope I never lose the amazing students we have.”

Moore’s reaction was primarily in response from the student body selecting Terry Newson and Corrie Williamson as homecoming King and Queen. Both students have special needs, and Moore felt incredibly moved by the students’ kindness and inclusiveness of the entire student body.

The crowning of Newson and Williamson was the culminating point of a week of festivities and a highlight of this year’s Homecoming.

Senior color guard member Maddie Beatty felt a rush of emotions prior to walking out on the field for court. “Since the color guard ‘presents’ each court member with flags on the field, it will be super touching to have my guard girls do that for me,” she said.

Prior to the announcement of the Newson and Williamson, the junior, sophomore, and freshman courts walked out onto the field and the winners were announced. Junior court members included Ashley Broderick, Kate Chasey, Kayla Keenan, Kristen Stogner, Ryan Fogg, Russell Marcum, Noah McPherson and Justin Yoggy.

McPherson received the title of Homecoming Prince and Stogner the title of Princess. McPherson described it as a moment of absolute shock. “I was just so thrilled to be able to represent my class,” he said. “It was one of the best nights ever, and I’m extremely grateful that my class selected me.”

Starr’s Mill played the Forest Park Black Panthers for the homecoming football game on Friday, Sept. 18, winning the game 49-18. “I always enjoy going to football games, but the homecoming game is always a highlight of the season,” sophomore Ginni Gray said. “It’s even more exciting when we pull a big win.”

Homecoming week continued into the weekend with a Saturday dance in the gym. . The dance counted 550 ticket sales, passing last year’s attendance.

The “Panthers of the Caribbean” theme made the atmosphere “exciting and new,” junior Anna Weaver said. Once in the gym, students soaked in the vibrant decorations, from the draped lights to the 20-foot pirate ship adjacent to the dance floor. Combined with visuals such as the fog and the student-made decorations, the DJ and free snacks in the gym lobby made the 2015 homecoming dance memorable for students.

Sophomore court member Holt recounts his night at the homecoming dance as a unique experience. He describes the dance’s layout as vivid and attractive, immediately exciting the students as they walk into the gym. “I’m definitely going next year,” Holt said. “It was that great.” He said he regrets not attending the dance last year.

In previous years, the school hosted the dance right after the game on Friday night, and Weaver enjoyed the Saturday dance more. “It was much easier to attend the dance this year,” Weaver said. “There were more people, there was no trouble getting from the game to the gym like last year, and it all made for a more enjoyable experience.”

The homecoming dance wouldn’t have been such a success if the sophomore class didn’t spend hours decorating in accordance with “The Panthers of the Caribbean” theme.

The vision for the dance and the hallway decorations wouldn’t have come to fruition without the preparation of both students and parents.

Although the actual hallway decoration did not take place until the weekend prior to homecoming week, the four class executive boards held meetings well in advance to design their hallways and create the decorations. “Us officers and our parents met about five weeks before the event and brainstormed our vision and plan for our hall,” senior class co-president Maria Curry said. “After being given the theme of Homecoming, we each distributed the work among ourselves and took up a section of the hall.”

Abiding by this year’s homecoming theme of Disney “When you wish upon a Starr,” each class selected a theme park to use as a template in transforming their designated halls. The senior class chose Magic Kingdom, the juniors Epcot, the sophomores Animal Kingdom and the freshmen Hollywood Studios.

Homecoming requires a joint effort among the student body, teachers, class sponsors and parent volunteers to run smoothly and efficiently.

“I personally am so grateful for the support of our all of parents who work with us on the board,” Curry said. “From tracking down obscure material to ordering industrialized supplies and spending late nights hanging up fabric, parents dedicate their time and effort to make our vision as students come through to the fullest, and I truly appreciate that.”

Although much work and dedication goes into the behind-the-scenes process of Homecoming, the finished product proves itself rewarding. “The halls always add an air of flair to the school, and I would say the students enjoy it as well,” Curry said.

For the second year in a row, the Class of 2016 won the Homecoming Hallway Decorating competition. The senior’s hallway featured the iconic Cinderella’s Castle at the entrance and included a Disney-themed toy shop, arcade and sweets shop to mimic the walk into Disney World’s Magic Kingdom.

Seniors walked down the red carpet in their hallway in a different-themed ensemble every day during the week, and the underclassmen joined in with their own themed attire.

The highly anticipated dress-up days are consistently a hit among students of all grades. “I look forward to the dress-up days every year because I’m able to have fun throughout the whole week with my friends,” junior Patrick Bonilla said.

Along with hallway decorations and the approaching homecoming football game, the excitement of students is escalated by days dedicated to dressing up in creative and stylish themed costumes.

Character day highlights the creativity of not only the student body at Starr’s Mill, but the teachers as well.

The foreign language teachers usually dress up as a group. This character day, the teachers decided to dress up as pirates. “We enjoy planning the costumes, we discuss what we’ll dress up as and that’s makes the day even more exciting,” Spanish teacher Marcela Sample said.

She anticipates character day not only to dress up herself, but to watch students put their best foot forward as well. There are no limitations or categories for possible costumes, and some students go above and beyond with their outfits.

The students show off their inventiveness or own interests. Junior Alex Stephens confidently entered the school with a costume he knew would impress his peers: a homemade costume dedicated to Dwight Schrute from “The Office.” The outfit consisted of parted hair, fake glasses and a couple of beets to complete the character. “I am a lifelong fan of the show,” Stephens said. “I even went all the way to Henry County to buy the beets.”

After characters day, the students flashback to the past during decades day.. Each grade is assigned its own decade: the freshmen have the 50’s, sophomores the 60’s, juniors the 70’s and seniors the 80’s.

“Decades day holds a beautiful array of styles and fashions,” freshman Clarence White said. “What I like most about the 50’s is the interesting hair styles. Each decade claims its own uniqueness.”

On game day, underclassmen showed school spirit with their Starr’s Mill garb, adorning themselves with all things blue, black and white.

The seniors, on the other hand, rallied together to showed off their position as heads of the campus by carrying on the tradition of toga day. Wrapping up in “mom’s finest linens,” or swaths of Walmart fabric, seniors sauntered down the hallways like Greek gods and goddesses, full of pride and nostalgia at the completion of their final homecoming week.

Others see this day as an opportunity to dress down and be comfortable. “It’s fun wearing your bed sheet as a toga,” senior Nick Bryant said. “It’s like you never left your bed.”

Before the final dress-up day, the whole school gathered together to put on the homecoming parade Thursday afternoon.

The student body weren’t the only ones dressed up Thursday. Members of the various clubs and boards dressed up trailers, cars and golf carts to be in the annual homecoming parade held at 5 p.m. Float designs varied from Disney themes, like the Ex Libris book club’s “Beauty and the Beast” cart, to the Class of 2017’s sinking boat to the German club’s explosion of  German colors: red, gold and black.

The Class of 2018 won the award for best float once again with its “Pirates of the Caribbean” ship featuring a student dressed up as Captain Jack Sparrow “steering” the float and smoking cannons peering from the sides.

It wasn’t all smooth sailing, however, as the ship’s looming mast caught the bottom of the powerline located above the intersection of Redwine and Robinson Road. Despite the obstacle, the sophomores pulled off a win.

The Best Golf Cart award went to Peers Are Linking Students club. With festive balloons, a Starr’s Mill color scheme and a train of carts for members to ride on, approximately 20 PALS students participated.

Both students and parents contribute to the decorating process, and several students with special needs enjoy getting involved. “Mitchell Tompkins and his mom are two that love to provide a golf cart with decorations each year,” Gagliano said. “He looks forward to the parade each year and loves participating in it with PALS.”

While decades day finished with the parade, spirit day ended with a senior-run pep rally.

The tradition of the pep rally always builds anticipation for the homecoming game held later that day, and the goal each year is to get the students as excited as possible. Senior class sponsors Vicki Morgan and Laura Alldredge strive towards this goal.

“It’s all about hyping the students,” Morgan said. “That’s why we put so much preparation into the pep rally.”

The pep rally begins with performances by the marching band, dance team and cheerleaders. The seniors encourage audience participation and had a volleyball game between the grades and presented the senior superlatives. After an hour of hype, the students were ready for the homecoming game.

With a week packed full of school traditions and Panther spirit, this year’s homecoming left students with lasting memories. “This was probably the best homecoming experience I could have ever imagined,” sophomore Doug Morris said. “I can’t wait to see what’s in store for next year.”