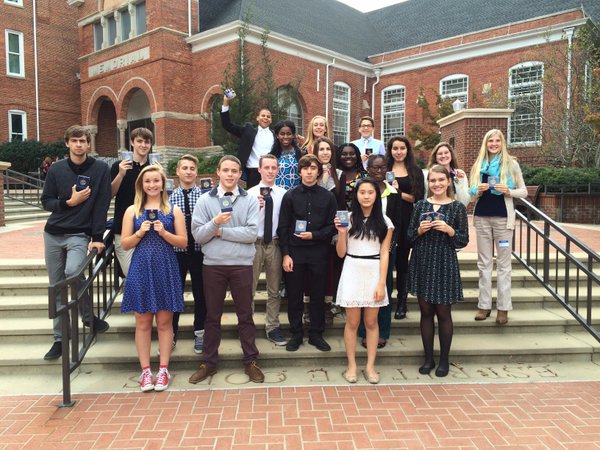 Starr’s Mill award recipients pose with their medals on the steps of Clemson University. They won 18 out of the 19 student awards this year, with a winner in American Sign Language and three winners in multiple languages.

Starr’s Mill proved a fierce competitor during the Clemson Poetry Declamation Contest held at Clemson University on Oct. 26. “We had 21 award winners, including three multiple language winners,” Spanish teacher Laura Alldredge said. “We could not be more proud of our students.”

The incredible performance by the students earned 18 of the 19 students awards, the highest winning percentage Starr’s Mill has ever had. “I think the students owe the success to the foreign language teachers,” junior Tim Hahn said. “They motivated us to really want to win first place, and they pushed us to practice consistently. It all paid off.” Hahn received two first place spots in Spanish and French.

Winning a place in the competition is no easy task. “The students must practice a rigorous schedule in order to have a shot,” Alldredge said. “The judges are unbelievably strict, so even one mispronunciation can cost you a spot at the top.” Alldredge explained that the judges may not even award a first place if they feel there was no one worthy of it.

With over 400 total students from Georgia and South Carolina, the competitors are divided into groups of six. Starr’s Mill filled fewer groups than past years because of a band competition, but this did not stop Starr’s Mill from topping other schools and earning a spot as the most successful school in the competition.

In addition to their holistic success, Martin was the first student from the Mill to compete in ASL and place first.

“I’m definitely happy with my placing,” Martin said. “I was relieved that practicing my poems was worth all the work after they announced I won first.” David spent a month practicing the poems “Dew on Spider Web” by Dorothy Snow and “Deaf World” by Clayton Valli everyday to earn his award.

While the awards motivate contestants to strive for perfection, Martin found a deeper meaning that the Clemson Poetry Contest offers. “My main motivation was to spread awareness of American Sign Language,” Martin said. “I heard about the contest because my brother also competed in an ASL portion for French.”

The competition is notable for the high amount of practice required for success. “I would spare half an hour every night to practice my two poems,” Phan said. “The amount of work put into it was tiring, but it all paid off.”

The demanding practice schedules lasted a month, and foreign language teachers and peers helped motivate them along the way. “[Marcela] Sample pushed me to practice and recite my poems in front of class,” Phan said. “I don’t think I would’ve won without that support.”

Although some students prepared in front of the mirror, it’s entirely different to recite poems in front of the judges. “I knew my poem perfectly when practicing, but when I recited in front of a crowd I misspoke a word,” Phan said. “I thought I didn’t do better than maybe third.”

Dual language students face a more demanding schedule in order to place in each language. “I dedicated so much time to win in two languages,” Dixon said. “It was so easy to mix up the words because of it.” Dixon placed in both French and German, making him one of three multiple language winners along with Hagen in German and French and Hahn in Spanish and French.

“The students who participate create their own advantage in learning a foreign language,” said Alldredge. “They deserve it because they are the truly motivated ones.”