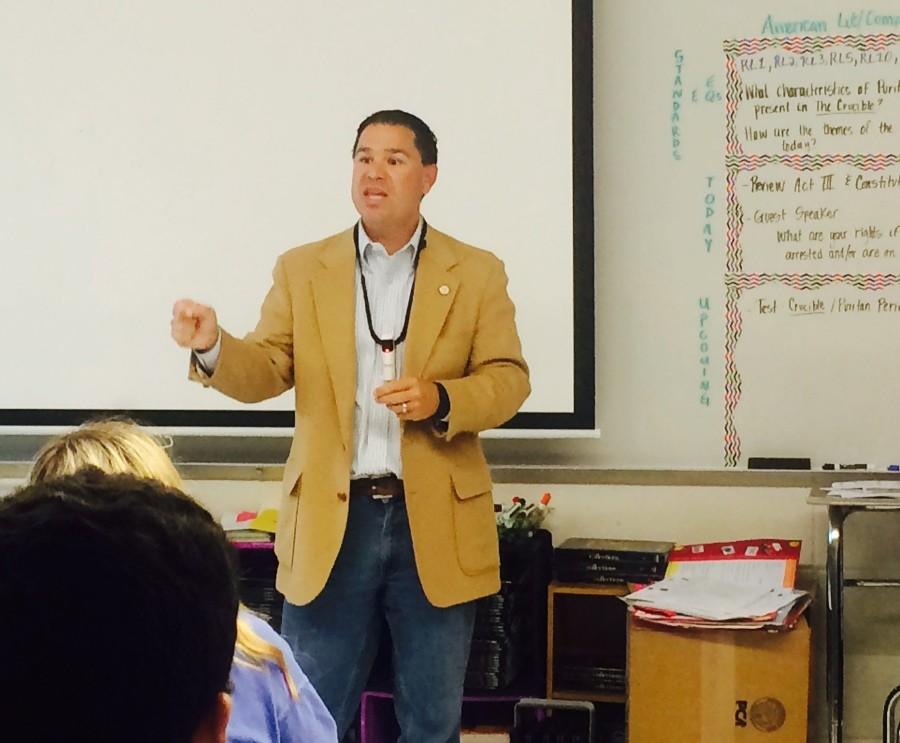 Judge Jason Thompson discusses a modern day court case to Whitney Shoemaker’s junior English class and describes his responsibilities as a judge. Since 2006, Thompson served as a judge, starting off as a municipal court judge in Peachtree City before being elected as state court judge of Fayette County.

The play, considered a classic of American literature, takes place in 1694. The story focuses on the Salem witch trials, caused in part by the strictness of Puritan beliefs. During these trials, magistrates and jurors decided who was guilty or innocent through the use of archaic legal practices and are considered by historians to have treated defendants unfairly.

Thompson explained how judges hold the responsibility to treat all defendants fairly, contrary to what  “The Crucible” portrayed.

During a short presentation, Thompson discussed legal rights in the current judicial system and how theses same rights were severely limited during their development in the Puritan colony.

Though all juniors read “The Crucible” as part of a county requirement, only Shoemaker’s class was treated to the special presentation. Because Judge Thompson is Shoemaker’s brother, he was happy to help and inform the class about modern legal proceedings.

His visit during Shoemaker’s fifth period class also helped fulfill his goal of visiting every Fayette County school to find students interested in shadowing a professional at the Fayette County State Court. “It is an honor to work in this capacity. The work is challenging but very rewarding,” Thompson said. “Everyone deserves their day in court.”

During the class, Shoemaker discussed trials held in front of a judge and how a judge would handle the situation between defendants using legal rights. Then, Thompson explained the different responsibilities a judge has, including wielding the power to overrule when a counsel gets to speak, presiding over both civil and criminal case and deciding what the defendants have to pay based on his crime or the rule that was broken.

In addition, the students learned much about the judicial profession. “Being a judge is doing what is right and fair,” junior Tristan Goolsby said.

Working as a judge includes “being fair and impartial to everyone,” Thompson said. Judges must also follow three principles: treat everyone respectfully, treat everyone equally and follow the law.

“The Crucible,” however, included judges who held illegal trials without the guidelines Thompson discussed. His lesson emphasized the subjectiveness of the Salem court to deepen the class’s understanding of Miller’s work. Shoemaker’s class learned that a judge receives full power in a courtroom to give commission and righteousness to the law.