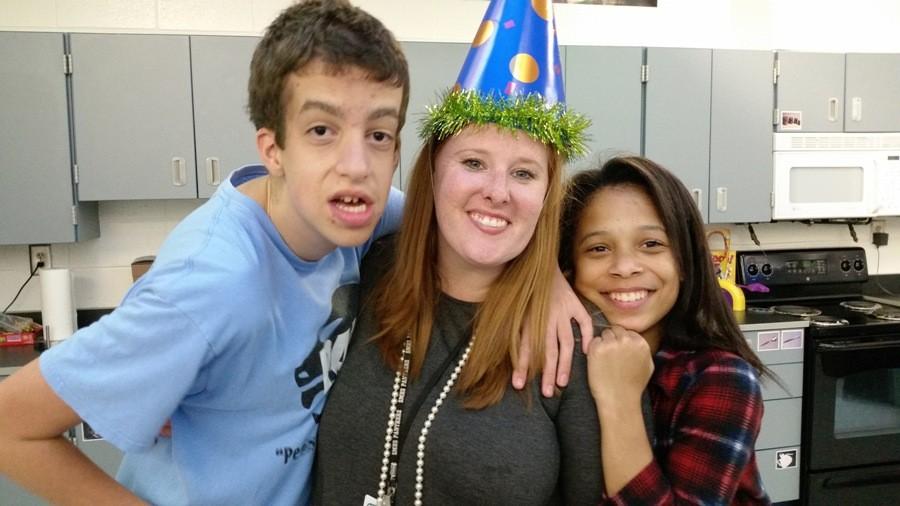 Adaptive curriculum specialist Courtney Savage and two of her students celebrate her birthday with cake and party hats. Savage said that she is honored to be chosen as Starr’s Mill’s teacher of the year.

“I love my job and coming to work,” adaptive curriculum specialist Courtney Savage said.  “I can’t imagine doing anything else.”

Savage earned Starr’s Mill teacher of the year thanks to the nominations of her fellow co-workers. She specializes in helping the special education students with social and living skills. Savage has been teaching at the Mill for 11 years and plans to stay for a long time.

“So frequently special education teachers are not considered for this award, and I appreciate the vote of confidence from my peers,” Savage said.

Savage takes an individualized approach toward her students’ education, a concept where a student is able to reach his or her full potential in a positive learning environment. Through her experience as an adaptive curriculum specialist, Savage has learned that it is important to celebrate all of the students’ victories.

“In order to be an outstanding teacher, I believe that one must believe in every student, focus upon their strengths,” Savage said.

After she graduated high school, Savage moved to the College of Charleston and earned a bachelor of science with an emphasis in mental, emotional and behavioral disability in 2005. She also served on the board for the Council for Exceptional Children, the “largest international professional organization dedicated to improving the educational success of individuals with disabilities and/or gifts and talents,” and she is still a council member today.

During the school year, Savage works to further her students’ “educational success” through developing her own curriculum to help students learn daily life and independent living skills.

Savage and her students take excursions to restaurants like Chick-fil-A and order from menus to learn to be more sociable with others.

Savage also takes her students to the Peachtree City Tennis Center to practice tennis, a game they seem to really enjoy. Individual growth is a main component of the class and Savage said that “it amazes [her] to see [her] students learn and grow as freshmen and then watch them graduate as seniors.”

Within this program, students sing, dance and play instruments in front of an audience, similar to a recital or showcase. In the first year of starting the program, 2009, Savage and her students’ first show was in the chorus room, where parents and chorus students composed the audience.

Over the years, as these semester performances became increasingly known by other students and Fayette County schools, their venue shifted from a chorus room to Duke Auditorium, so people from around the community could enjoy their performances.

“One of my favorite parts of my job is seeing the kids perform up on stage and show their talents,” Savage said.

Two months into holding the  teacher of the year title, Savage said that she feels honored to be nominated. “I am truly blessed,” Savage said.