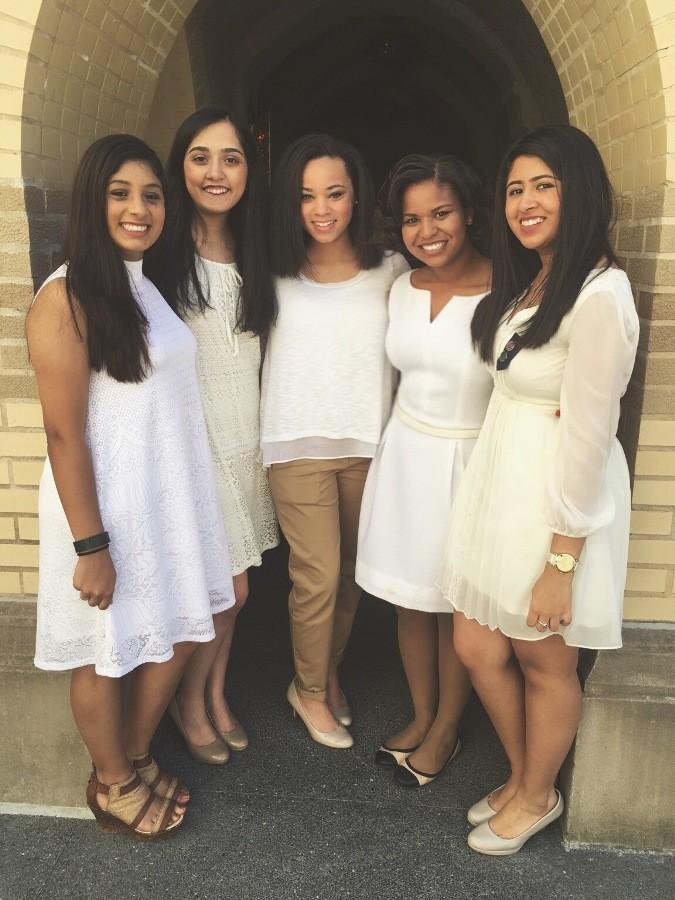 March 6, 2016 - Five Fayette County Girl Scouts of America Gold Award recipients pose together prior to the award ceremony at the Fox Theatre in downtown Atlanta. Starr’s Mill seniors Arisha Ali, Maria Curry, and Saba Verani were among those who earned the highest achievement in Girl Scouting.

“[Girl Scouts] takes passion,” Gold awardee senior Maria Curry said. “If you want to help change the world and be a positive force, it’s a great organization to be a part of.”

On March 6, Curry and seniors Arisha Ali and Saba Verani received the Girl Scouts Gold Award. According to the Girl Scouts Organization, the Gold Award is the “highest achievement in Girl Scouting.” This prestigious award is only open to high school girls and includes the seven-step project that helps solve a problem within the recipient’s community.

“Growing up, this is the award that I wanted the most,” Verani said. “So achieving it was something that I have been waiting for.”

According to Girl Scouts, whether a young girl is 5 years old or 17 years old, being a Girl Scout opens a young girl to new challenges, and shows girls how to make good decisions. However, being a great Girl Scout takes many sacrifices.

“I’ve had to cancel out on friends [for Girl Scouts],” Ali said, “but it was worth it because I made several bonds with girls in my troop and I know those girls will be there for me in the long run.”

Curry,  Ali and Verani dedicated numerous hours of hard work in earning the Girl Scout Gold award.In order to receive the Gold award, the young ladies had to do a project that required over 100 hours of work. The goals for the projects were to provide meaningful, long-term solutions for local and/or global communities.

Ali’s project was called “Coloring Lives,” which was about art therapy. Ali has a couple of friends that have been through cancer and saw the affect it had on them. She wanted to teach people in the community how art therapy works and how it can help people heal.

“Going through cancer is really emotionally devastating,” Ali said. “I taught people in the community about art therapy, and then they made canvas and donated them to the Amanda Riley Foundation for Cancer in Atlanta.”

While Ali chose to focus on art therapy, as a means to positively impact the community, Curry turned her attention to “Start Today.” Her program was an eight week interactive and online program modeled after the “Let’s Move Campaign,” for healthy living that was available for everyone’s access.

“Each week I would have a speaker come or a nutritionist,” Curry said, “or we would meet up for a fitness workout.”

Verani, however, chose a project that would affect people more globally. Her project was called “Operation Pride,” where she encouraged children and adults from her Peachtree City community to make care packages for soldiers overseas in the Middle East.

“I chose this project because I think that they deserve more compassion from us,” Verani said. “Since they’ve done so much for us to protect our country, it is important to let them know that we are thankful.”

Girl Scouts make a commitment not only to themselves but also to their troop and community. By the time Ali, Curry, and Verani had finished their projects, they had fulfilled one of the main principles of the Girl Scouts Gold Award:  “solv[ing] a community problem not only short term but for years into the future.”

“Gandhi has a quote that says ‘The best way to find yourself is serving others,’” Curry said, “and I think it’s important to give back to people who don’t have what you have.”