Leonard suits up for sophomore year 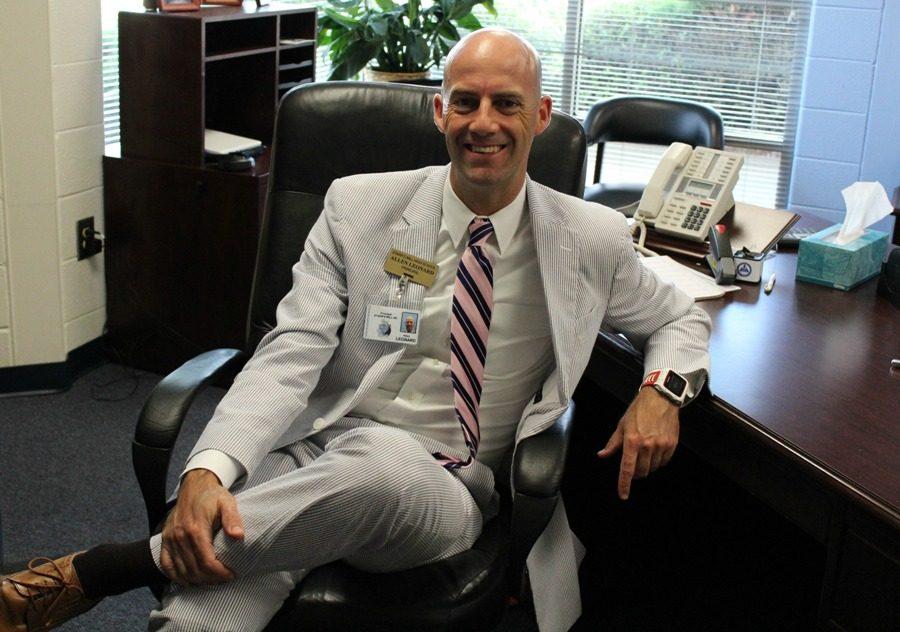 Principal Allen Leonard poses for a photo in his office. “I’m always prepared and excited for the school year to start so I can improve each year at my job,” Leonard said. This will be Leonard’s sophomore year as principal.

“I constantly have academic goals [and] extracurricular goals for the school,” Leonard said. “We are very blessed to be such a high achieving school in just about every area you could possibly think of.”

School is back in session and Principal Allen Leonard suits-up for his second year as principal. This year Leonard has many focuses and goals that he wants to reach. For example, the Mill won its second consecutive Director’s Cup, so one of Leonard’s focuses is to repeat the victory. Another goal for the year includes winning a Shuler Hensley award with the help of the new drama teacher Andrew Snider, who used to be a former Shuler Hensley judge. Leonard also urges the chorus and marching band to continue the outstanding jobs they have done in the past.

“I’m really counting on our students this year to do their very best so we can bring home the gold,” Leonard said.

Since obtaining his position as principal, Leonard remains positive there will be no sophomore slump this year. Leonard knows the Mill inside and out, so he knew most of the staff and students going into the job. Trained by former principal Audrey Toney, Leonard felt prepared for his first year as principal.

“I can thank Mrs. Toney as my mentor for leaving the school in such a great condition,” Leonard said. “I am always trying to find ways to improve myself and how I can make the school better for everyone.”

One way Leonard plans to make such improvements will be by working with the central office to renovate the gym ceiling, roofing, and HVAC units this upcoming summer. Leonard expects the renovation to proceed through the 2017 and 2018 school years.

“There is a lot of planning that goes into the renovations,” Leonard said.

Leonard noticed a renovation in the way people act around him too. “Being the face of Starr’s Mill is like being a D-list celebrity. I hear my name everywhere I go and I’m getting used to the attention now,” Leonard said.

Keeping up with the amount of excessive emails he receives has been a change and challenge as well. Leonard went from receiving 40 to 70 emails a day in his old position as assistant principal to now receiving 80 to 100 emails.

Even with all of the extra attention, Leonard continues to find  ways to improve the school.

Morning announcements have been moved to fourth period instead of first period and Leonard said that he felt it would give the students and teachers more class time through the day to be more productive.

“Hopefully the morning announcement switch will make a difference by the end of the school year,” Leonard said.

This seemed to be a small change compared to much bigger decisions Leonard has made in the past.

One of the toughest calls Leonard had to make last year was having graduation inside the school. Leonard watched five different weather channels to see if there was the slightest chance of sun. Zero of the five forecasts came through and he made the final call at 1:00 p.m. on Friday for an indoor graduation ceremony.

The transition to move all of the seats and other ceremony materials indoors proved to be a difficult process. Leonard gathered around 60 staff members to help move seats and equipment around, and he also requested that they bring their trucks to help move larger items.

Shortly after the staff moved everything for the indoor graduation, the forecast reported a zero percent chance of rain. The same situation had happened at Leonard’s graduation from The University of Georgia.

“Probably one of the hardest decision that had to be made was moving graduation inside,”Leonard said. “If I knew it wasn’t going to rain graduation would of been outdoors but I had to keep the students safe.”

Despite the obstacles he has faced, Leonard said that he looks forward to continuing his job as principal. “I’m blessed to have obtained this position. This school keeps on surprising me more and more,” Leonard said.