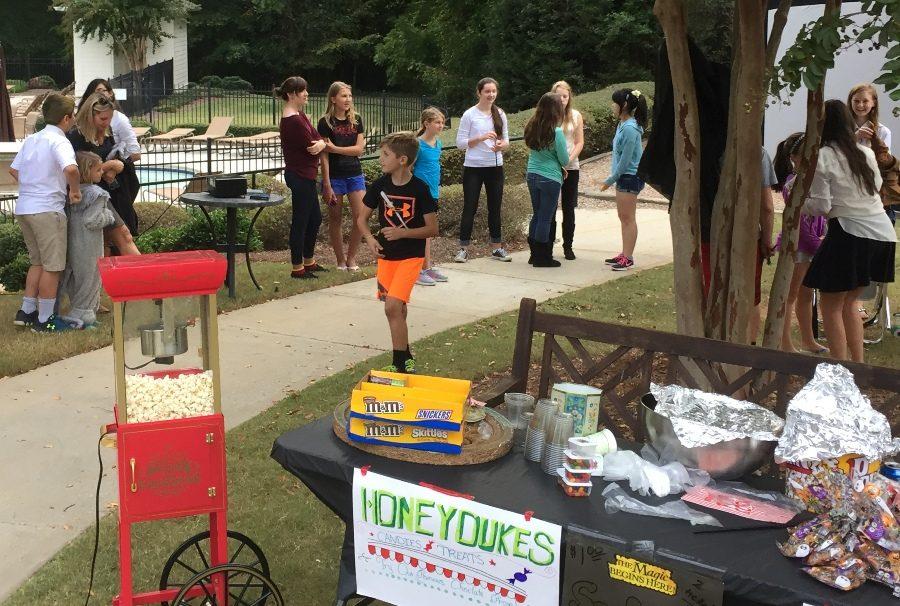 “The event required a lot of volunteers,” freshman and organizer of the Fayette Humane Society fundraiser Marissa Heinsz said. During the event, Heinsz and other high school volunteers spoke with attendees and worked the snack bar. The snack bar was named after the candy shop, Honeydukes, from the J.K. Rowling series “Harry Potter”.

To the average Starr’s Mill student, Saturdays are spent playing sports, hanging out with friends or even catching up on homework.  Freshman Marissa Henisz and a group of students she organized, however, spent their Saturday raising money for the Fayette Humane Society by hosting a fundraiser on Oct. 15 at the High Grove subdivision club house. “My sister and I have always been really big on helping the animal shelter,” Heinsz said.

The organization needed funds for supplies to help with the animals.  After shopping for supplies and buying the food for the event, they set a goal to raise at least 500 dollars. The overall profit actually came out to $1200. “The turnout was really great,” Heinsz said.

The event’s theme was based around author J.K. Rowling’s popular “Harry Potter” book series and movie franchise and had many activities that tied back to the theme. Several games included Knockdown, Witch Hat Ring Toss and a real-life game of Quidditch. Each game cost one or two tickets to participate in.  Tickets were sold at 50 cents each.  In addition to the activities, there was a showing of the first Harry Potter movie towards the end of the afternoon. “We ended up making a lot of money from just the tickets alone,” Heinsz said.

Along with ticket sales, the group set up a gift shop, concession stand and donation jars next to each of the Harry Potter themed stations. Staying true to the theme of the fundraiser, even the smallest of details tied back to Harry Potter, which fans of the books and movies could appreciate. Even the foods at the concession stand were modeled after the candy store in Hogsmeade, and the items available to purchase included “potions” or bottles of bubbles. “We went all out. My motto is go big or go home,” Heinsz said.

The volunteer group worked just as hard to spread the word and draw crowds to the event. In the weeks leading up to the fundraiser, volunteers turned to social media, school connections, friends, and flyers, including an advertisement in “The Citizen,” to spread the word. “’The Citizen’ called me, and that is what got a lot of the people there too,” Heinsz said. Overall, Heinsz said that she and her peers were pleased with the turnout.

Heinsz hopes to make the fundraiser an annual event and maintain the Harry Potter theme. To keep the event interesting each year, Heinsz will switch up which “Harry Potter” movie is shown, and will encourage avid fans to watch for hidden details so that they remain entertained. “We hope to do it every year —at least until I go off to college,” Heinsz said.