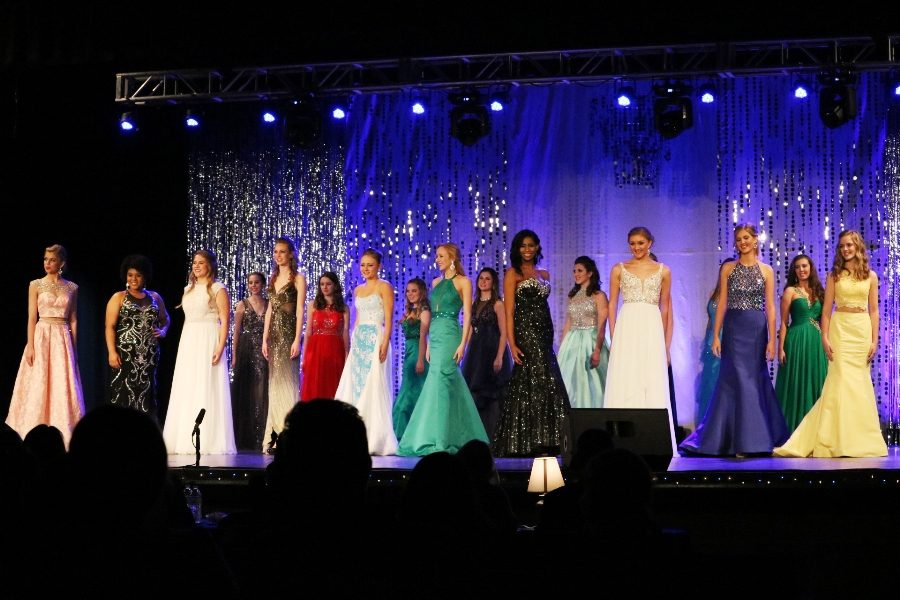 All 18 contestants stand on stage in the Willie Duke auditorium for the announcement of awards and the crowning of the 2017 Miss Starr’s Mill. “Consistently, the girls say that after participating in the pageant they have more confidence,” math teacher and pageant organizer Emily Willis said.

“Everyone did a phenomenal job,” senior Maddy Hammond said. “I feel like everyone could have won.”

On Jan. 14, Maddy Hammond was crowned the 2017 Miss Starr’s Mill. The crown was passed down from 2016 winner, senior Caroline Poole.

The Miss Starr’s Mill Pageant began in 2002 as a fundraiser for the drama department to help fund their shows. This is the second year math teacher Emily Willis has taken over leading and organizing the pageant since the retirement of former drama teacher David Spearman. The production was organized with the help of current drama teacher Andrew Snider, German and dance teacher Antonela Kljajic, and the Drama Booster Club parents.

“[From participating in the pageant] I have learned to try my best in everything I do and just be the best person that I can be,” junior Olivia Crew said.

The two-day pageant presented 18 hard-working contestants who each received the chance to compete for the crown. On the first night, all 18 girls took the stage in the Willie Duke auditorium and performed an opening number, choreographed by Kljajic, to the popular song “HandClap” by Fitz and the Tantrums. Poole even made an appearance in the performance. After this, each girl participated in three categories, casual wear, talent, and evening wear, while the judges scored them on a scale of 1-10. The night ended with preliminary awards. Crew won both talent and casual wear awards, and junior Alayna Burdekin won the award for evening wear.

Poole performed four different times throughout the pageant. On Friday, she sang “Music of the Night” from the musical the Phantom of the Opera and “I Got Rhythm” by George and Ira Gershwin. On Saturday, she sang “Can’t Help Falling in Love” by Elvis Presley and “Over the Rainbow” by Arlen and Harburg.

Night two of the Miss Starr’s Mill pageant was filled with excitement. The contestants were welcomed to the stage once again to perform the opening number. The top ten girls were announced that would continue in the pageant. These ten girls’ scores from the previous night were erased, and they all competed in the same three categories for the judges to rescore them. Earlier in the day before doors opened for night two, each of the 18 girls had an eight minute interview with the panel of judges. The interview score counted as 30 percent of their total score for the second night.

“The winner is the young lady that earns the most cumulative points in casual wear, evening wear, talent and interview,” Willis said.

After seeing each of the ten girls, all 18 contestants were called back to the stage for the announcement of award winners, runner-ups, and the crowning of the new Miss Starr’s Mill.

“I love performing and being up [on stage],” Clements said.

Finally, Hammond was announced as the 2017 Miss Starr’s Mill.

Hammond, as well as the four runner-ups, received scholarships. These were sponsored by Christopher Allessio, financial adviser with Edward Jones, Dr. John Burney of Digestive Healthcare of Georgia, and Dr. McPherson of Peachtree City Orthodontics.

Joining the pageant is solely voluntary. There is an informational meeting usually in September for students, followed by a parent meeting where the rehearsal schedule is handed out. Contestants begin rehearsals in October in order to allow adequate time for the full production.  Each girl is responsible for her own hair and makeup preparation as well as buying her outfits and dresses as needed. However, Kristi Taubert, an expert hair colorist and stylist from Glamorama, came one afternoon and offered the girls hair and makeup tips.

“The rehearsals were really fun, and the actual pageant was a ton of fun,” Hammond said. “It was great to be on stage and perform with everyone.”