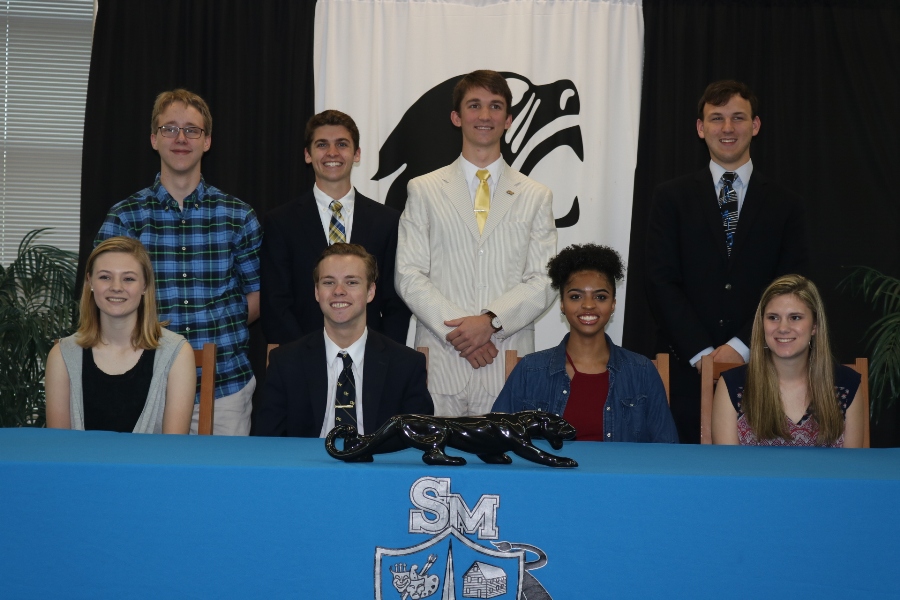 Class of 2017 band members and college band signees pose for a photo to honor their achievements.

On April 28, the band hosted its annual college signing day for the class of 2017. The ceremony celebrated eight Starr’s Mill Band members who will participate in their college band this upcoming fall. These talented students have been awarded numerous scholarships from the schools they will attend. Collectively, the scholarship money adds to $432,000. Band director Scott King also announced the musical groups the seniors will perform in the fall.

“At Georgia Tech the band is a big part of the game day atmosphere. The student body begins to gather two hours before the games, and then parades around the campus. It is this tradition and many others associated with college marching band that excite me the most about marching in college,” senior Kyle Meyhoefer said.

Eight band members will be continuing with band at the college level:

These musically inclined students will continue their music education in various types of bands. Concert ensembles, marching bands, and jazz groups are just some of the band programs that await the upcoming freshman college class. Whatever the group they perform with, however, each student will find themselves in a family similar to the one they were in during high school. “Band is a family,” baritone player Ryan Bohdan said.

The band senior class also will continue their academic education to aim for various careers in life. Meyhoefer, for example, looks forward to a college education in technical engineering.

Cassidy Powell and Crystal Knight are currently the only seniors with goals of majoring in music. They plan on turning their musical abilities into a way of life. “I want to dual major in music and psychology and music education to become a music therapist,” Powell said.