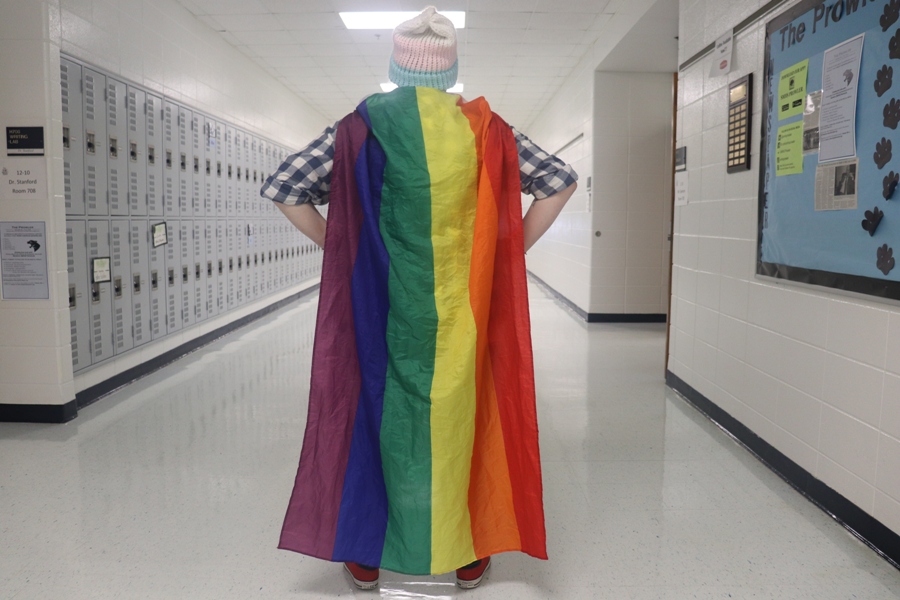 Gay Straight Alliance club member stands in the hallway wearing a transgender flag beanie and the gay pride flag as a cape. The GSA club strives to encourage sexuality and gender diversity in the school.

On Sept. 1, the Gay Straight Alliance Club had its first meeting in English teacher Brandon Kendall’s room. The club’s founders Abigail Mapel and Madi Hynson got the club approved over the summer. The GSA club will help the school become a more progressive and safe environment for students in the LGBTQ+ community.

Over the summer, Hynson and Maple created an Instagram account for the club as the main way to spread information. Other students found the GSA profile and made their own Instagram accounts to target the GSA club, but the accounts were reported and deactivated soon after their creation. Because of this initial negative feedback, the two founders were skeptical of any people showing up, but they were quickly proven wrong.

The classroom ran out of seats for people before the club started at 8 a.m. Throughout the meeting, people continued to come into the room and by the end of the meeting the room was overflowing with people. After the meeting, Junior Diana Russell* donated a pride flag to the GSA club which is now held by Sophomore Alex Martin.*

For the first meeting everyone introduced themselves with their name, preferred pronouns, zodiac sign, and what pizza topping they would be to add a little individuality and creativity to the meeting. The many unique pizza topping answers ranged from bacon, onions, and peas to pineapple, extra cheese, and even the dough itself.

“Each person tried to make their pizza topping something like their personality or something funny to make the others laugh,” Jesse Myers* said.

Normal meetings will consist of members leading group discussions to educate their fellow peers on little known subjects and the important issues of the LGBTQ+ community. Other topics may include the everyday struggles in the transgender community to preaching the religious LGBTQ+ acceptance.

The goal of the GSA club is “unifying everyone in the school and the [LGBTQ+] community and making a good support system, so we have lots of friends that can help everyone in the community whenever they’re struggling,” Hynson said. “Also, educating allies and educating any people who aren’t allies.”

The Starr’s Mill GSA meets the 1st and 3rd Friday of every month in Kendall’s room.

*The identities of these students were concealed at their request.