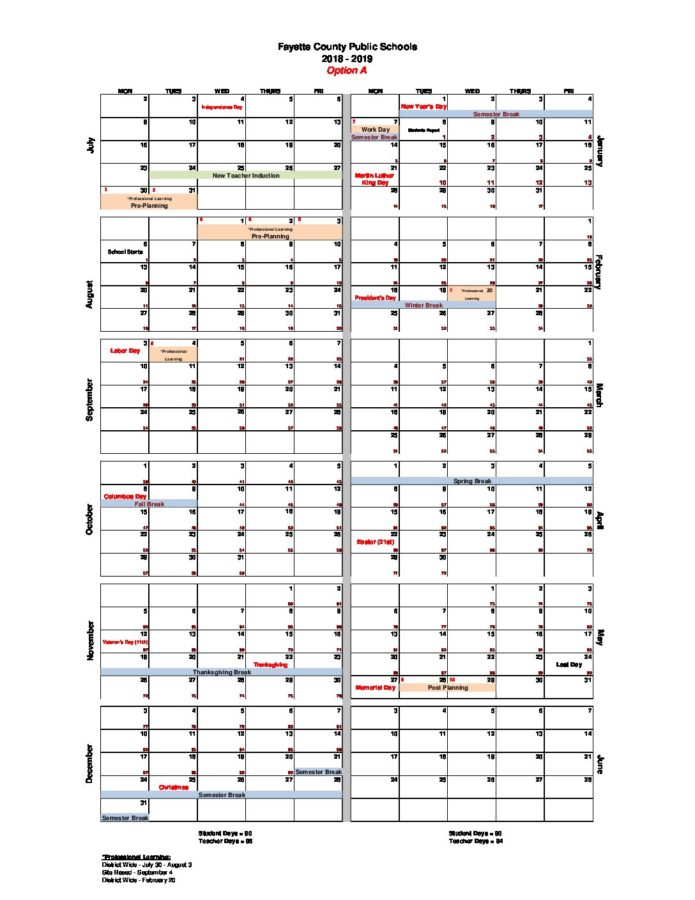 Fayette County Board of Education

The Board of Education had its monthly meeting this past Monday and made a decision on the 2018-2019 school calendar. Along with making a few minor adjustments, the calendar will rid the school calendar of half days.

Starr’s Mill students have expressed mixed feelings about the new half-day system introduced in the 2017-2018 school year. However, whether the shorter days are favored or not there is no need to think about them any more, for as of the 2018-2019 school year the half days will come to an end. This decision was made at the Board of Education meeting on Oct. 16.

The Board of Education holds monthly meetings to plan and discuss the needs in the school system. One major topic on this month’s agenda was next year’s holiday calendar. The Board had two options: Plan A, which ended the half days, and Plan B which kept them. After a 4-1 vote the Board sided with Plan A, but not without some controversy.

The Board debated the new schedule for a few minutes with all but one wanting to go with Plan A. However, Brian Anderson from District 5 of Fayette County had a different opinion on the matter. Anderson told the board that 95% of the people that he talked to favored Plan B and he pondered why Plan A was even in discussion. The results, however, were collected by himself and not from any other Board officials.  The response to this from the other Board members was that the committees of staff, parents, and students favored plan A and that’s the path the Board should take. Also according to an online survey that was sent to various people in the county about which schedule they favor, Plan A  won 57-43.

Regardless of his inquiries, Anderson lost the vote and plan A won in the end. “The decision was made by the parents, a lot of which are Delta pilots who have to schedule vacations a year in advance,” Board Chairman Barry Marchman said.

The new schedule will add a day to fall break, end half days in the county, and make winter break half a week as opposed to the current calendar that allows for it to be a full week.

Along with the decision of the new calendar, the Board discussed several other school wide concerns.

Over the summer the Board of Education went through  training sessions to better familiarize themselves with their roles on the Board. Superintendent Joseph Barrow used part of the meeting to get feedback on how the training helped the Board.  “[The training] revealed some places where the Board can do better,” Chairman Barry Marchman said.

The Board also used the meeting talk new possible pathway coming to Fayette County schools. The Board wants to bring in new pathways that will interest their students. Some suggested topics included engineering and digital media. “[There are] lots of corporate engineers in the area who need those fields,” the Board said.

The Superintendent also sent out a reminder that the updated Special-Purpose Local-Option Sales Tax bill, SPLOST III, will be on the ballot in the Nov. 8 election. Early voting started Monday and will continue until November 3.

A Proclamation was also made at this month’s meeting. Nov. 5, 2017, will be Retired Educators Day in Georgia, to celebrate all the workers who spent their lives making students school careers better.

The Board’s next meeting will be on Nov. 13 at 7 p.m. in the Board of Education building located at 210 Stonewall Avenue in Fayetteville.