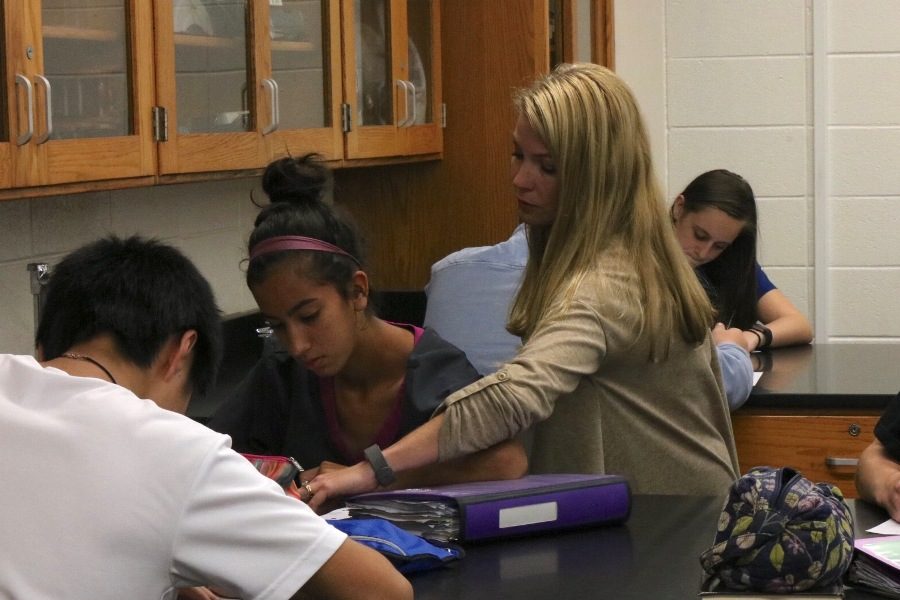 Kelly Rock earned Teacher of the Year this year for her extreme dedication and passion to inspire her students. “She has taken the time out of her morning and afternoon to help me with science fair and she always makes sure I understand what I’m doing in Biology,” Rock’s current student Claudia Williams said.

Starr’s Mill has always been a school that “demands excellence.” This saying however, is not just for its students. The teachers at the Mill also exhibit extraordinary characteristics that help improve the future’s of over a thousand students each year. Therefore, every year one teacher is honored above everyone else for his or her extreme dedication to the student body by being chosen as the Teacher of the Year. This year, the teachers at Starr’s Mill selected Kelly Rock.

“If I know something [like biology] it’s a lot easier to teach it effectively to students,” Rock said.

Rock went to school at North Georgia College and earned her Bachelor’s degree in biology with a minor in chemistry. She went to school with the intention of going into medicine, but eventually decided that was not the route for her. After trying various careers in biology, she finally decided on education. With this new idea in mind, she graduated from North Georgia and moved to Georgia State where she got her Master’s degree and teaching certificate in two years. “I went through several other occupations related to biology, but nothing clicked, and then I decided to pursue a career in education,” Rock said.

After college, Rock completed her student teaching experience at Rising Starr Middle School, and in 2000, earned her place at the Mill. “[Rock] is a really hard worker and she is very willing to go out and find other things, like labs, to do. She really raises the bar for the biology area,” science department chair Dan Gant said.

“Science is different from other subjects, we tend to get pre-specialized in one given field,” Rock said.

Rock also has made her mark on some of the clubs at the Mill. She started her career at Starr’s Mill coaching basketball cheerleading. However, she had to give up the position in 2003. That’s when she started helping Kristen Peavyhouse with the Starr’s Mill High School section of the Beta Club.

To Rock, the best way to influence her students is to demonstrate the importance of the subject of study. “My passion is biology,” Rock said. “So my biggest goal is that even if students don’t leave my classroom with a passion for biology, they appreciate it.”

Rock also has influenced her colleagues over the years. One impact she made comes in the form of a humorous story. A few years ago, Rock received an angry email from one of her student’s parents. The email stated that Rock was “the queen of her classroom” and the science teacher decided to show the message to her peers. The result was a new nickname. Rock earned the title “Queen of the Corner Classroom,” a nickname that has withstood the test of time. To solidify the name, science teacher Stacy Killingsworth bought Rock a crown, making the 2017 Teacher of the Year, royalty.

“Rock is a fantastic teacher and has done a wonderful job at this school. There is a reason the faculty has chosen the ‘Queen of the Corner Classroom’ as the Teacher of the Year,” Principal Allen Leonard said.