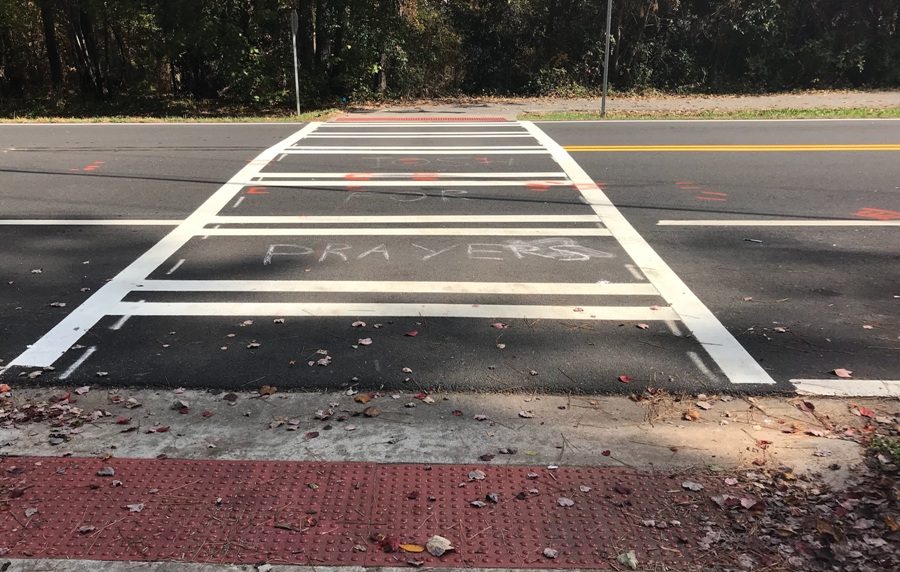 On Nov. 6, the third wreck this year occurred on the Foreston Place crosswalk. The crash sent one student to the hospital. County officials are developing a plan to re-route the golf carts to make crossing Redwine Road safer for students.

The Fayette County Board of Education has always demonstrated excellence. It’s schools have won countless awards, scored some of the highest scores in the state on standardized testing, and produced thousands of successful young adults who are thriving in their current careers.

Several factors go into creating such a successful school system and one major requirement that has made Fayette County well known in the state of Georgia is school safety. Recently, however, safety is being overlooked by the county and the BOE.

Starr’s Mill students who take the golf cart to school only have one choice of travel if coming down Redwine Road. They must cross the busy street on the crosswalk that comes out of the Foreston Place subdivision. This seems like a simple task, but in reality, it is extremely difficult. Redwine Road always has a constant flow of traffic on both sides, leaving most golf cart riders having to rush across even when oncoming traffic is approaching.

The county has offered simple solutions to try and fix the dilemma, but none are stopping the crashes on Redwine. Twice a day, sheriff’s department officers are stationed as crossing guards to try and direct the flow of traffic more smoothly. While this has proved effective when the police are there, the officers are only there before and after school, leaving the remainder of the day open to wrecks.

“In 2011, my daughter got into a wreck after a National Honor Society meeting. Nobody was hurt, but the car was totaled,” science teacher Dan Gant said.

The crossing guard solution also takes away valuable people and resources from the county. Since county sheriff’s department officers are used in place of actual crossing guards, the officers are unable to complete their intended careers while they are busy directing traffic. Creating one big solution would stop the waste of county resources.

Back in the spring several ideas for a permanent Redwine solution were brainstormed at a county level. While five plans were suggested, the two major ideas were either a tunnel or a flash beacon. A final decision was made in the April election by the Educational Special Purpose Local Option Sales Tax 2. The election was used to see if the county should adopt the new source of school funding. The new funds achieved in the vote will be used in the construction of a tunnel on Redwine.

“Recognizing this location as a traffic concern, the Board of Commissioners placed a path and tunnel project on the 2017 Special Purpose Local Option Sales Tax (SPLOST) referendum, which was approved by the voters earlier this year,” county engineer Phil Mallon said.

The vote to construct a tunnel did not bring an end to the problem, however. Now, six months after the vote, construction hasn’t even started on the busy intersection. The plans for the tunnel have been written up, but not as much progress has been made since.

As of right now, construction won’t even begin until summer of 2018 at the earliest. That means golf cart accidents are still at a high risk of occurring for at least another year. “We are pushing hard for construction to take place during summer break in 2018, but there is a lot of work that has to get done between now and then,” Mallon said.

Starrs Mill can’t afford any more accidents. Since the start of the 2017-2018 school year, three wrecks have occurred because of golf carts crossing Redwine. On Nov. 6, the third accident of the year sent one student to the hospital. Upon crossing Redwine on golf cart, the student was hit by a car going down Redwine. The wreck resulted in the destruction of the student’s golf cart, along with multiple injuries. The student and family declined to comment on the accident.

For now, the county can only hope there are no more accidents as the majority of the work being done on Redwine is only in the planning stages. The basic design has been laid and the biggest change will be the addition of a golf cart path on the Foreston Place side of Redwine. The new path will be connected to Panther Path with a tunnel underneath the busy street.

Hopefully, the start date of the tunnel construction on Redwine will begin sooner than the current plan to commence in summer. After the Nov. 6 crash, authorities have agreed to check out the area and see if the location is still in compliance and if immediate changes need to be made. This may help in the needed fight to help bring an earlier project start time on Redwine.

“That evaluation is underway and we don’t know at this time if any changes will be made,” Mallon said.

In the meantime, Mallon has asked students to fill out this survey, starting in December, which addresses needed projects in Fayette County. If there is a problem on any of the golf cart paths in the county, please leave feedback on the survey so the commissioners can get to work on improving the county and making paths safer for students.