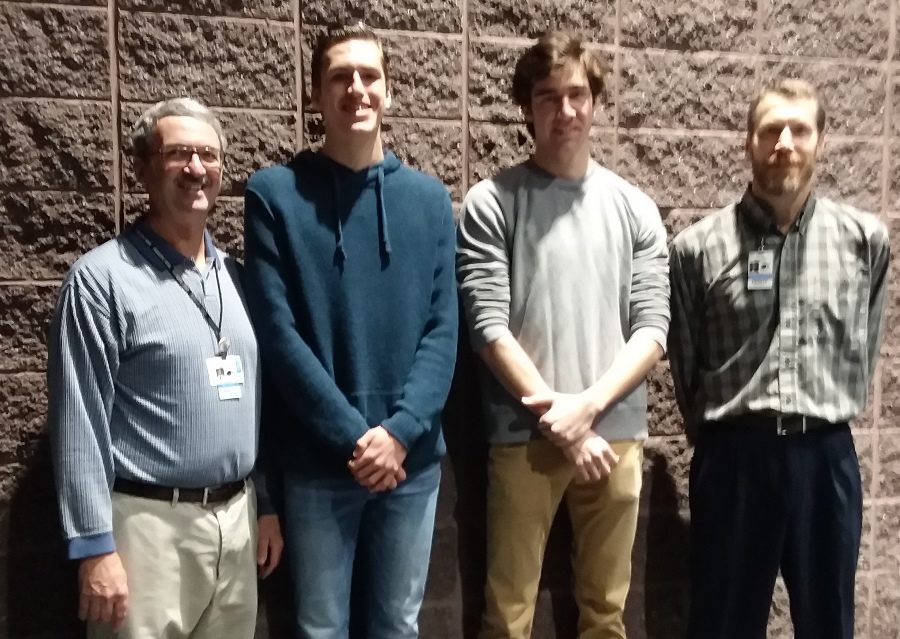 Seniors Devin Lohman and Bryce Smith stand next to Star Teachers Dan Gant (left) and Todd Little (right). The students earned the title of Star Student after they received the highest SAT scores in the senior class and then gave their most influential teacher the Star Teacher award.

At this point in the school year, seniors are making all kinds of decisions — scholarships, colleges, and majors. For two intelligent 12th graders another question had to be answered: Who is their most influential teacher?

Every year Starr’s Mill chooses the senior with the highest SAT score as recipient of the Star Student award. The prize, however, is not just for the student receiving it. Along with the victory, the student is allowed to pick the teacher who has been the most influential in his or her education. This teacher is named Star Teacher. Last year, the prize went to Griffin Tillman who selected AP U.S. history teacher Susan King as his Star Teacher.

This year the award had a strange outcome. Instead of the usual one student winner, two seniors tied for highest SAT score. Bryce Smith and Devin Lohman were selected earlier in the semester as the winners. Smith choose his 10th grade gifted chemistry teacher Dan Gant as his most influential teacher, and Lohman selected visual arts teacher Todd Little.

This is the first time Little has been selected for the prize and this is Gant’s second recognition. “It is a very nice honor for a kid to come back, who I have not taught in two years, and choose me,” Gant said.

Bryce Smith chose Gant for his Star Teacher for a number of reasons. In the one year Smith had the science teacher, Gant was able to expand Smith’s scientific mind and bring forth a student who truly cared about the subject of chemistry.

Gant had such an impact on Smith, that he plans on earning degree in chemical engineering in the fall, meaning that Gant’s teaching may have helped Smith find his life’s calling. “I chose Gant because he sparked my interest in chemistry when I was in his 10th grade gifted chemistry class,” Smith said. “In his class, I learned the value of curiosity and was motivated to expand my knowledge about the scientific field.”

The other choice in Star Teacher came from Devin Lohman who selected visual arts teacher Todd Little. The art teacher has shown teaching success in his ability to work with the students until they truly understand the subject area. “Little is patient and helpful, and how he runs his class is what made me realize that architecture is my future,” Lohman said. It’s those teaching skills that convinced Lohman to go for a degree in architecture in the fall.

“There is a level of speechlessness to it. It’s one of those things that when they announce Star Teacher I feel it would be nice, “ Little said. “When they announced it this year though, I was on cloud nine. It’s a great part of my professional career.”

On Feb. 8, Smith and Lohman both won the Fayette County Star Student award.  They, along with Gant and Little, will now compete at the state competition later this spring.