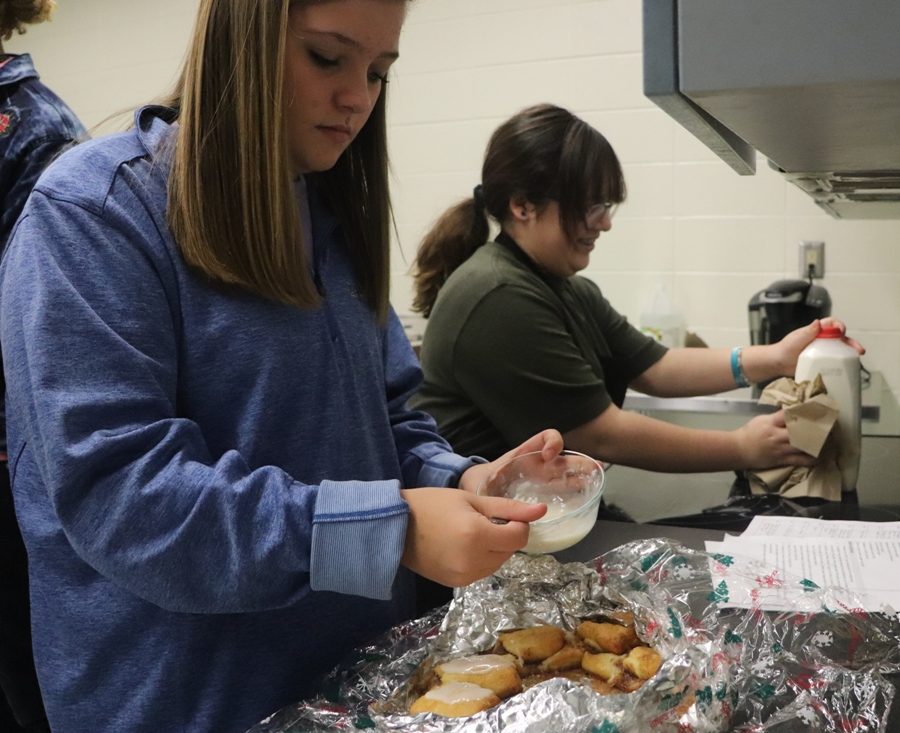 Culinary art students bake king cake just in time for Mardi Gras. The cakes were requested by the French Department to allow students to fully embrace the French origins of Mardi Gras.

“Madam Snelgrove asked us to make the cakes for her classes since she had previously done this at her last school and we were happy to participate,” culinary arts teacher Adriah Williams said. Getting the culinary classes involved gave more students the opportunity to learn about this unique holiday.

“I love baking, so I thought making the king cakes was really fun. The cakes taste similar to cinnamon rolls,” freshman culinary arts student Hayley Hepler said. “We made them last week as well, so we could improve upon them before we sell them to the French [classes].”

Following several days of trials and experimentation, the culinary students perfected their king cakes. Once the cakes were prepared, they delivered them to the French classes to enjoy. French students could purchase a slice of cinnamon or cheesecake flavored king cake for $2 each. This price covered the cost of ingredients to prepare the treat.

“After learning a little about the origins of Mardi Gras, which is mainly celebrated in New Orleans, a city deeply rooted in French culture, we were given the opportunity to purchase a slice of the cake from the culinary arts [classes],” sophomore French student Rommy Sierra said. “Although I’ve had king cake before, I’ve never had homemade king cake. I thought it tasted very good and was better than the store bought cakes I’ve had before.”

French teacher Jill Snelgrove agreed in saying that the king cakes were much better than anything you could buy at the grocery store. “I’d love to do it again, because it’s more authentic, fun and different. Anybody can go buy a king cake, but to have someone make one for you is a really cool experience,” Snelgrove said.

As often expressed in Mardi Gras festivities, the two classes let the good times roll by learning something new, baking and enjoying a cultural delicacy. Snelgrove is eager to participate in this activity again next year and is hopeful the culinary arts classes are too.