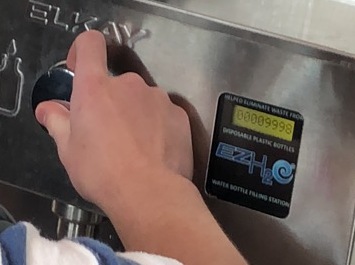 A student fills up the 9,999th water bottle at the station in the rotunda. Late Tuesday afternoon, students huddled around the fountain to see who would claim the 10,000th bottle filled.

Late Tuesday afternoon, math teacher J.B. Campbell’s dreams were crushed as he was only seconds from filling the coveted 10,000th water bottle at the new water dispenser. Instead, junior Rhett Perry, one of Campbell’s own students, stole the long-awaited honor as Campbell approached.

Over the last two months, Campbell discussed with his classes his plans to fill the 10,000th water bottle at the station located in the rotunda. He estimated that the station would hit the magic number on the morning of March 7. This date was calculated by counting the average number of water bottles a day, around 80 to 90, finding the number of bottles before the goal, and dividing it by the average to get the number of days it should take to get there.

“Mathematically, I feel vindicated that I was correct, or would have been correct,” Campbell said.

By midday Tuesday, it looked as though Campbell’s projection would be true. However, “shenanigans,” as some may call it, took place as students would go to the water fountain and hold down the button, simulating more water bottles being filled and bringing the total number closer to 10,000. After hearing that the fountain was approaching the destined moment faster than calculated, Campbell made his way to the rotunda, only to be seconds late.

With the 10,000th water bottle being filled more than halfway through the school year, it is unlikely that the counter will reach 20,000 by May. Even though 20,000 may not seem tangible, other interesting number combinations are possible. “The quest is on for a new number,” Campbell said.