‘Wizard of Oz’ showcases Starr’s Mill talent on many levels 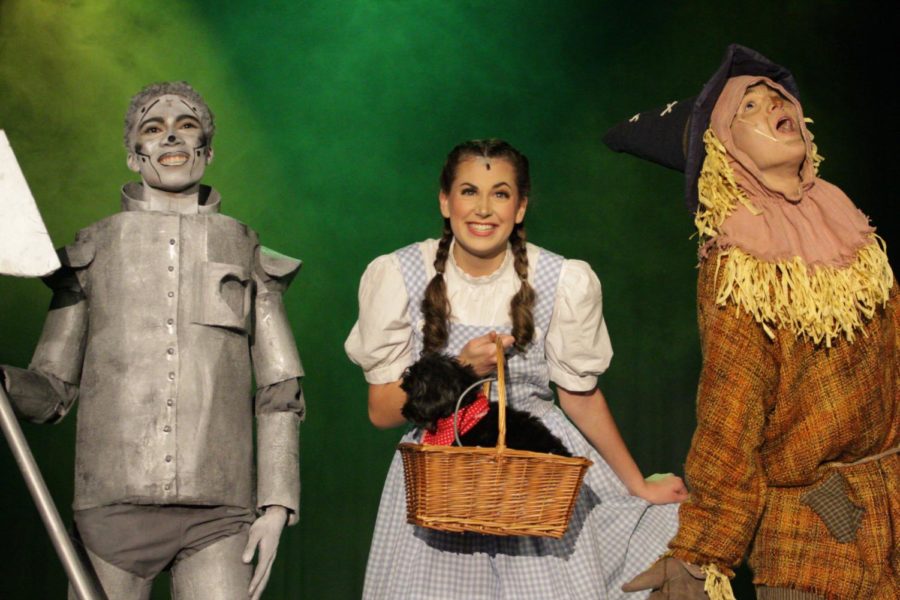 “I think it went really well. Everyone seemed to enjoy it, which was wonderful,” Silvas said. “I’m very proud of every student. They put in a lot of work and time, enjoyed themselves and had fun, and were proud of their performance.”

The musical stayed true to the 1939 film adaptation with an obvious visual spin. Costumes, sets, and props were themed around Steampunk, which is a genre of science-fiction that combines technology and aesthetic designs using steam- and spring-propelled gadgets and industrial machinery.

The Steampunk aesthetic became more prominent as Dorothy, played by senior Jo Dearman, entered Munchkinland and began her journey toward the land of Oz. It was especially noticeable when Glinda, portrayed by junior Gillian Owens, entered in a silver sprocket representative of her traditional bubble in the film.

While the Steampunk look is traditionally dark and gloomy, many of the scenes were vibrant with color. Costumes and sets were both colorful and bleak at times, often discerning between dreary Kansas and the exciting fantasy world of Oz. Additionally, special effects were mostly used during scenes within Oz, such as colored spotlights, smoke, and even fake snow.

The cast made use of many movable and interactive set pieces, including a wagon, a storm cellar, and even Dorothy’s house. During transition scenes from Kansas to Oz, Dearman was suspended into the air on a wooden bed prop and pulled across the stage, as if being moved by the twister. Props like ribbons and umbrellas were also used during dance numbers seemingly creating magic and excitement out of ordinary objects.

Having a live orchestra for the first time in six years was another impressive aspect of the show, as the Starr’s Mill band got to collaborate with the theatre department. “It was a tremendous experience. It gave our students an opportunity to show off,” King said. “We played very difficult music, but we learned a lot from it. I personally learned a lot when trying to keep the music with the dialogue.”

It also gave the actors more creative freedom and ease on stage. “[The orchestra] was really helpful,” senior actor Douglass Morris said. “You can change the music to fit how you want to sing and dance with it. Before, with live tracks, you had to get the timing perfect.”

The magic and beauty of the musical truly came to life through the dancers choreographed by Antonela Kljajic and junior Clarence White. To blend the normalcy of Kansas with the fantasy of Oz, dancers took on the roles of different elements of nature, including the tornado and winds. These dancers, including the Starr’s Mill Pantherettes, appeared throughout most of the show and even took on the role of flowers during the classic poppy-field scene. This added a truly unique and interesting aspect to the entire production.

“I thought it went really well. It was a different experience, especially for me on the teaching side,” White said. “It was very different, seeing my choreography done by my own friends.”

This was also the debut performance for sophomore Scotty Hindy who played the role of Oz. “It was an awesome experience, and I loved every minute of it. It’s cool to find something that you’re passionate about,” Hindy said. “I didn’t know what to expect going in, but it was worth it.” Hindy plans to audition for upcoming Starr’s Mill theatre productions.

This production was a distinct one for many reasons, including it being the last Starr’s Mill performance for many beloved senior Thespians. For Dearman, this is her sixth and final Starr’s Mill role. “It’s bittersweet. This is my last show, I’ve done musicals all four years. It’s like leaving a family behind,” Dearman said. “I’m glad it’s over, because it’s a lot of stress, but the shows were so fun.” This is also the last show for Lou Conti, Douglass Morris and Ginni Gray.

Senior Thespians expressed their gratitude toward and faith in Silvas’ knowledge to direct upcoming shows. “This is such a good place for people who haven’t done theatre before. It’s a good program for people to grow in,” Dearman said. “There’s nobody better that we could leave this in the hands of than Silvas.”

The Starr’s Mill theatre department would like to thank the community for all of their support in making this production a possibility. “I feel very blessed and spoiled to be a part of this community and to work with such great talent,” Silvas said.