Defler and Davis advance to final 16 in state cheer competition 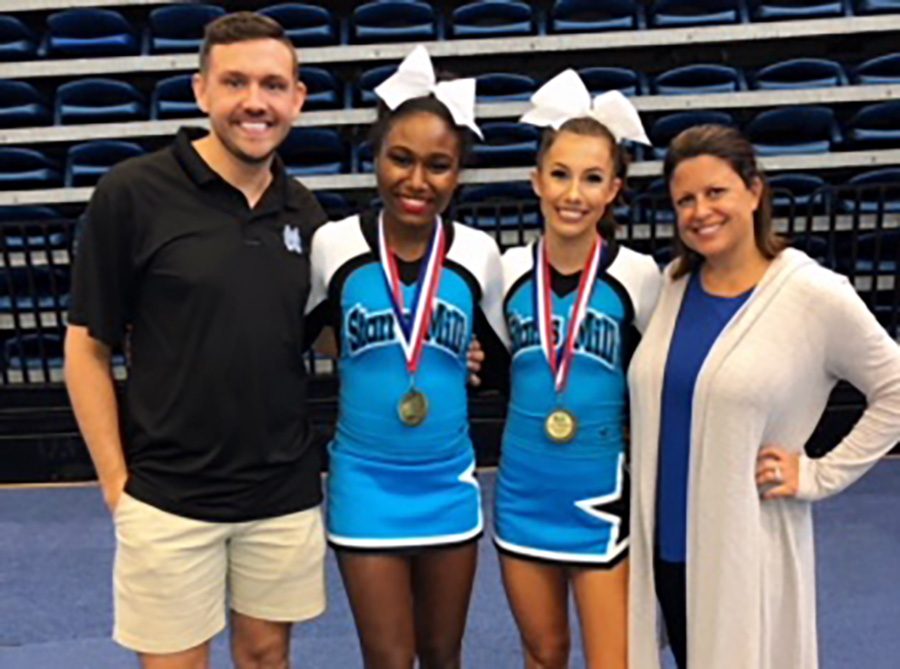 Coach Todd Saye (far left), varsity cheerleaders Tori Davis (middle left) and Hannah Defler (middle right), and head coach Heather McNally (far right) all gather together after the competition. Both girls advanced into the top 16. The winner of Cheerleader of the Year will be announced on Nov. 9.

Senior varsity cheerleaders Hannah Defler and Tori Davis recently competed for the state Cheerleader of the Year award. Both have advanced to the final round of 16.

“It’s a difficult competition, but both of our girls are absolutely fantastic,” head coach Heather McNally said.

On Aug. 4, Columbus State University hosted the competition featuring the state’s top 40 cheerleaders. Along with Davis and Defler, six other seniors from Fayette County advanced to the top 40 — seniors Bennett Cate, Claire Wilson, Halle Lane, and Lauren Schimandle from McIntosh, and Susannah Kendrick and Emma Smith from Whitewater

“[Cheerleader of the Year] was a great experience,” Davis said. “It’s definitely something different in that you are performing a routine mostly by yourself and the spotlight is 100% on you, which was different than if I was on the floor with my teammates. It feels so great to be named Georgia High School Association top 16 as well as be a member of the All-State Team.”

To start off this journey they went through a difficult application process that began after the nomination deadline on May 1. This process started with a long list of objectives. GPA, an essay, counselor approval, multiple teacher recommendations, and the cut down process, all make up the application process. After going through this, judges pick the top 40, which was announced on July 1.  Then, those 40 competed on Aug. 4 and the field was narrowed to 16.

To compete in the top 40, cheerleaders choreograph their own routine using the girls on your squad for stunts. “It’s just the one day competition, so they do their routine, they perform it, they name top 16,” McNally said.

Once they have competed, the top 16 is announced. Defler and Davis were selected for top 16, along with two other girls from Fayette County, Kendrick and  Smith from Whitewater.

The award winner will be announced on Nov. 6 at the state cheerleading competition.