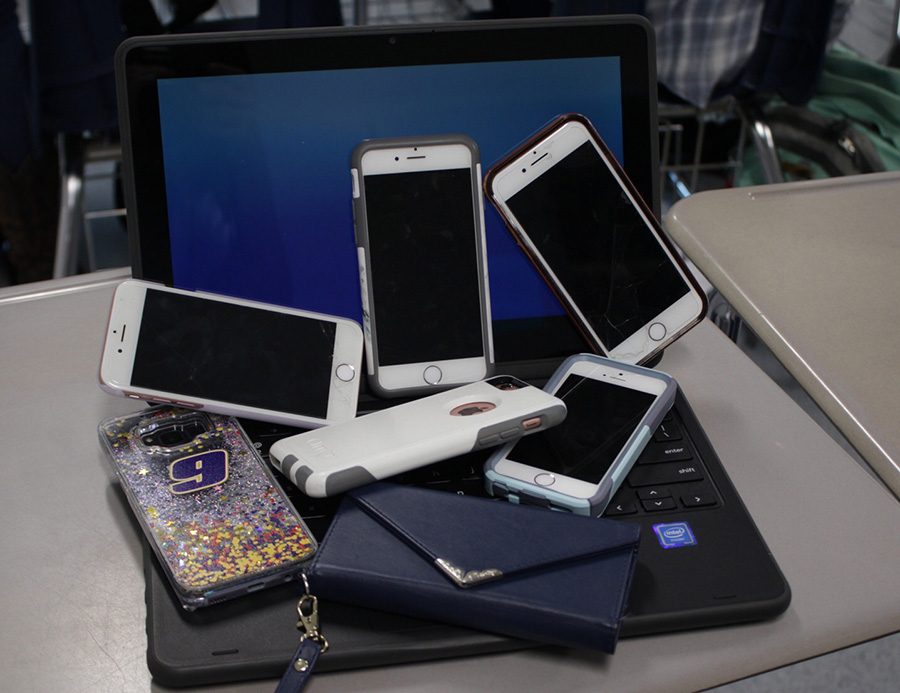 The new cell phone policy states that phones are no longer to be allowed for classroom usage without a clear relevance to the curriculum. Instead, teachers will use Chromebooks purchased through the Educational Special-Purpose Local-Option Sales Tax.

The restrictions of cell phones and their purpose in classroom-related activities was varied classroom to classroom prior to the 2018-2019 year. This year, a new cell phone policy has been established, finally putting the debate of cell phone usage to rest.

For the foreseeable future, cell phones have been banished from the classroom and replaced with Chromebooks purchased through a Educational Special-Purpose Local-Option Sales Tax. “The Chromebooks make the transition to a cell phone-free zone much easier,” Principal Allen Leonard said.

On July 17, while students were gallivanting across the Avenue or soaking up sunshine, the School Leadership Team, including Principal Allen Leonard, went on a retreat to discuss the most efficient way to run the school. “What we heard from our leadership team pretty unanimously was that cell phones are a distraction to our students,” Leonard said.

Research had shown that students work better when they are fully engaged, and based on the evidence, they had more potential without cell phones around.  By the end of summer, a new plan had been set in stone to maximize productivity, abolishing personal cell phones in the process.

Until the 2018-2019 year, the usage of cell phones was according to each teacher’s discretion. Now, any infraction of the new cell phone policy is treated beyond the boundaries of a teacher’s classroom. Teachers are now instructed to turn in phones to the front office where they may be picked up by a student’s parent.

Teachers who were once very nonchalant about phones now enforce it, for they could also have an issue if they do not follow these new regulations or enforce them. “I could get a demerit on my observation,” economics teacher Mark Decourcy said.

Some teachers have not changed the way their classrooms run at all. “I always made my students keep their phones in the pouches,” Spanish teacher Marcela Sample said.

Some students have also found that the new policy didn’t impact them as much as it was thought, reason being that they hadn’t used their technology in the first place. “I never had an issue with cell phones before, so I don’t see the reason it should affect me now,” junior Diana Shoaf said.

Junior Sierra Ramsey feels as if she has been affected negatively by the new rules, for it has compromised her ability to react to emergencies. She is aware that messages from her parents can be forwarded to her through the front office, by email or phone number. However, “it’s a bad idea to have me hear about my dying cat through the front office,” Ramsey said.

Junior Naomi Wheeler worries about her phone being stolen or forgotten because it was in the phone pouches. “I have also heard stories of people walking off with the wrong phone,” Wheeler said.

A possible issue of the cell phone was the loss of a potentially valuable resource of the internet, which students and teachers have used alike with the aid of the cell phones. This problem has been solved by the establishment of Chromebooks, which have replaced the necessity to use cellphones in class. “I will [use the Chromebooks] for everything I used to use cell phones for,” Decourcy said. Because macroeconomics and economics dealt primarily with current events, Decourcy used to make his students browse the internet on their smartphones.

Biology teacher Kelly Rock used to use cell phones for class-related activities, and she has a larger variety with the Chromebooks as a new resource rather than the students’ own personal devices. ”For my AP Biology class, we will do a lot of simulations, and my 9th grade class will also have various activities that they can use the Chromebooks for,” Rock said.

Most of the teachers are using a program called Orchestrator, allowing them to monitor everything the students do on the Chromebooks. “I like that my classes seem more focused, but I don’t like that the Chromebooks take away my privacy,” senior Donivan Barth said.

Spanish teacher Laura Alldredge used this ability to temporarily block all websites except Classflow on her students’ Chromebooks. The complete blockage of websites kept students from being distracted, which was the reason the new cell phone policy was established in the first place. This ensures that Chromebook users remain on topic and do what they are supposed to be doing, something that was impossible to do with cell phones.

Though it may look like there is no point in bringing one’s own technology anymore, Leonard specifically stated that he does not wish to completely outlaw the phones and other technological devices. “One of the things that is important to me is digital literacy and the soft skills of knowing when it is and is not appropriate to use phones, so I wanted to make sure the students had the opportunity before school, […] after class, between classes, to still use their phones,” Leonard said. However, the influence of the cell phones in class is over.

The elimination of cell phones in classrooms may have been just what the school needed to fight the distraction that always threatens to become an issue with more access to technology.