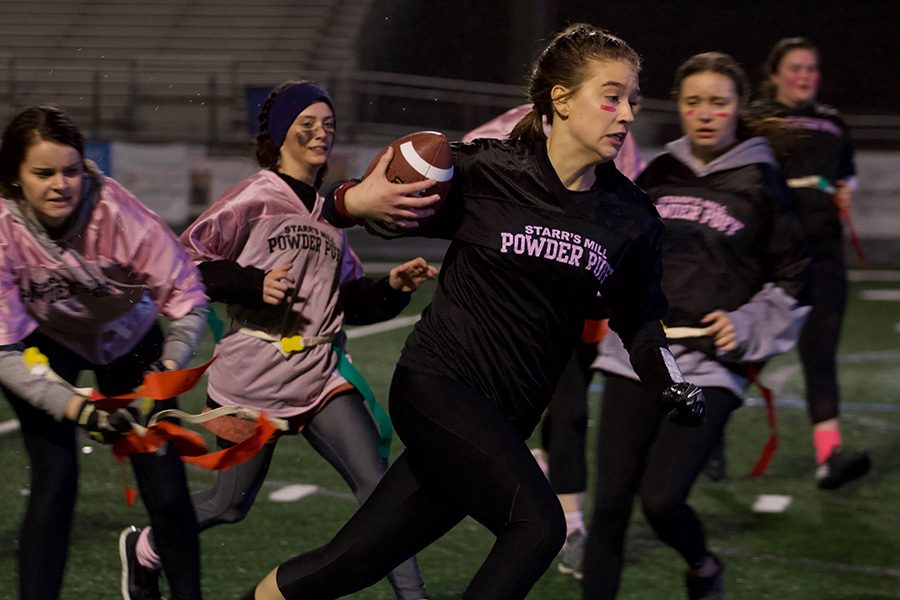 Powderpuff returned to Starr’s Mill for a primetime juniors versus seniors showdown. The two classes battled for two 20-minute halves, all for a winner to be determined in the final seconds.

Coached by seniors Michael Burnett, Jimmy Pecararo, and Greyson Faircloth, the class of 2019 stuck out a 1-0 victory over the class of 2020, coached by juniors Jeff Tiller and Jack Barczak.

“[The seniors] worked their tails off,” Faircloth said. “To come out and get the last second stop to win, that means the world to me.”

Senior Caroline Crockett played quarterback for the 2019 team and she ran an offense that consisted of seniors, Hannah Defler, Mary Dennis, Laura Sellers and others. The defense was spearheaded by seniors Maya Burns, Shelby Foster, and Madison Knowlton. Foster led the team in flags pulled, including a crucial stop inside the 5-yard line with under a minute left.

Chloe Spradlin, lined up at the quarterback position, led the juniors. Behind her was Miyah Hunter and Riley Mitchell. Hunter and Spradlin received most of the carries, and each had a handful of explosive runs.

“We’re seniors, it’s our last year here, and we come out and got a win against the juniors,” Crockett said. “There’s nothing better.”

The first half was slow, as both teams were trying to figure out their offenses. The seniors started with the ball, but a dropped snap and short runs caused a quick four-and-out. The juniors followed with similar results.

Each team found that running the ball was easier, as rain poured down during the game. Burns, Defler, and Dennis received most of the carries for the seniors, while Spradlin handled the bulk of the offense for the juniors. Both sides had long drives in the first half, but neither scored. After the first 20 minutes, the score was knotted at 0-0.

“We needed to get our act together because our offense was slacking,” Foster said. “All we needed to do to win was keep the juniors from scoring.”

The second half saw much of the same, as both teams found themselves inside the 10-yard line multiple times, but neither side scored. The seniors put on a long drive, but turned the ball over just a few yards outside of the endzone. The juniors marched back the other way, but eventually punted. The class of 2019 tested the air game, and Crockett found receivers downfield, but dropped passes prevented any progress.

Spradlin led heroic drives late in the game, but they all came up empty. The juniors began to break off big plays, but timely stops kept the seniors in the game.

With under a minute left, Hunter took off down the sideline with her eyes on the endzone. When she was about four yards away from the endzone, Foster laid out and dove for the flags, succeeding in her mission and preventing the score.

With clock running, the juniors lined up for one last snap, in which the ball carrier didn’t have her flags on. The penalty let the rest of the time run out, and as the score sat at 0-0, the rules stated the seniors would be awarded one point in the event of a tie. Thus, the class of 2019 celebrated their narrow win over the class of 2020.

“It’s so much fun that we get to come out here and play,” Crockett said. “But when we do it for a good purpose it makes it ten times better.”

The Powderpuff game raised $2,350 and another 400 items for Promise Place. The ticket sales and shirt sales all went toward helping women who have fallen victim to domestic violence.