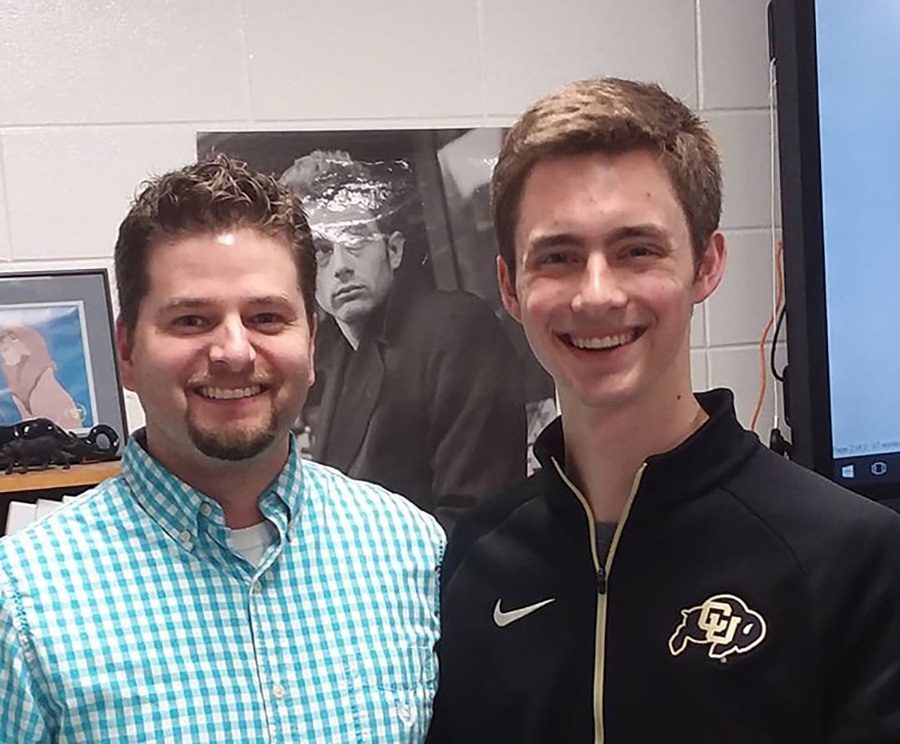 STAR Student Ian Fertig stands beside his choice for STAR Teacher, Justin Spencer. Fertig earned the honor because he had the highest SAT score in the class of 2019.

Principal Allen Leonard recently paid a visit to the Prowler’s newsroom to make a grand announcement.

“I believe it’s a testament to [Ian’s] abilities and his intelligence,” Spencer said.

Every year, the Success Through Academic Reporting Student award is given on behalf of the Professional Association of Georgia Educators Foundation to the senior with the highest SAT score. The student then chooses his most most influential and inspiring teacher.

Fertig’s selection came down to fate. “After talking to [Spencer] for five minutes, I knew I wanted to be in his class,” Fertig said. “He has a very matter-of-fact way of dealing with things, and I respect it a lot.”

Spencer, while gratified to have been chosen, believes all eyes should remain on Ian. “It’s not an experience for me. I’m just along for the ride,” Spencer said. “If you look back at Ian’s transcript and the classes he’s taken and the teachers he’s had, knowing the people I work with, knowing all the options he had to choose from–that’s really cool.”

Ian accepted the compliment in stride, but not before giving a few words of wisdom regarding the SAT. “I was attentive in class and studied through warm-ups in math class,” Fertig said. “I looked over a SAT prep book the week before the test. I didn’t spend an extensive amount of time studying, but those were really helpful for me.”

Regarding his future, Ian is not entirely certain about where he wants to go, but he has a general gist of what he’d like to do.

“After high school, hopefully I can go to a respected engineering college and become an engineer,” Fertig said. “I also like creative writing and journalism, but I don’t think I can make a career out of that.”

The STAR banquet will be Feb. 27 at the Fayette Chamber of Commerce office. There it will be decided which STAR student will represent Fayette County at the region level.