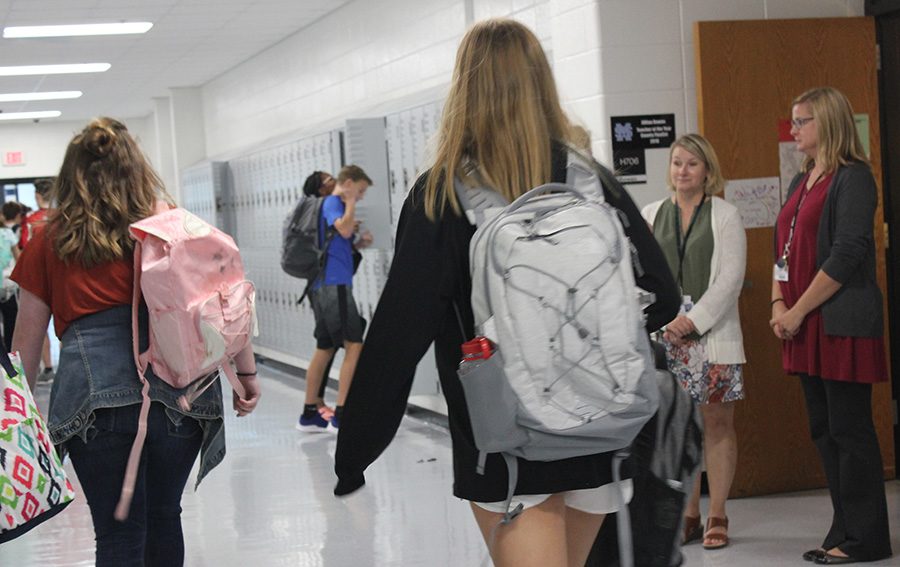 This year many changes will affect Starr’s Mill including bookbags, detection dogs, new security doors, and a new grading system. Students around the school will have to learn to adapt to all the new changes while still meeting the tradition of excellence the school maintains.

With new rules, responsibilities, and regulations, students return to school. This year will be filled with changes at Starr’s Mill.

One of the biggest changes affecting students is the school’s new bookbag policy. Bookbags at Starr’s Mill are not to be used first through sixth period. This rule originates in a safety concern that students backpacks were becoming a big factor in accidents in the hallway and classrooms.

“That decision was very much made with a safety perspective in mind,” Principal Allen Leonard said.  “Not just the safety of what the kids bring to school, but also thinking about safety when it comes to the safety of our faculty, kids, and administration.”

All Fayette County schools are also partnering with Interquest. This private company uses dogs to detect anything dangerous or suspicious on campus. This program focuses on dogs that appear less threatening than a normal German shepherd. The dogs will focus on finding drugs, alcohol, gun powder, and medication.

According to Interquest’s website, “The dogs are trained to produce a final passive response by sitting when they detect a trained odor.  This ensures they will not damage property, thereby limiting any potential liability to articles inspected.”

Another new safety feature at Starr’s Mill is the addition of doors outside of the main office and attendance office. The point of the installation is to restrict visitors from immediately entering the hallways without the permission of the office staff.

This year the school will go under academic changes as well as security changes.

Academically, the school will face a new grading system. All students’ classes will be graded on the same scale. This system is focused on bigger assignments like tests and projects counting more than other smaller assignments such a daily work.

“If we have teacher A and teacher B who are teaching the same course, we have been working toward making sure their grading systems are the same,” Leonard said. “That way students who have teacher A can’t complain that teacher B is easier. And if they have teacher A, everyone won’t want teacher B.”

The school is also introducing a program called PBIS which focuses on good behavior in the classroom. The teachers will take courses on the topic of the month and integrate them into the classroom.

“[PBIS] stands for Positive Behavior Intervention and Support, and without getting into technical detail, it is a way for schools to recognize certain behaviors that we want to specifically cultivate,” Assistant Principal and PBIS coordinator Scott Robinson said.