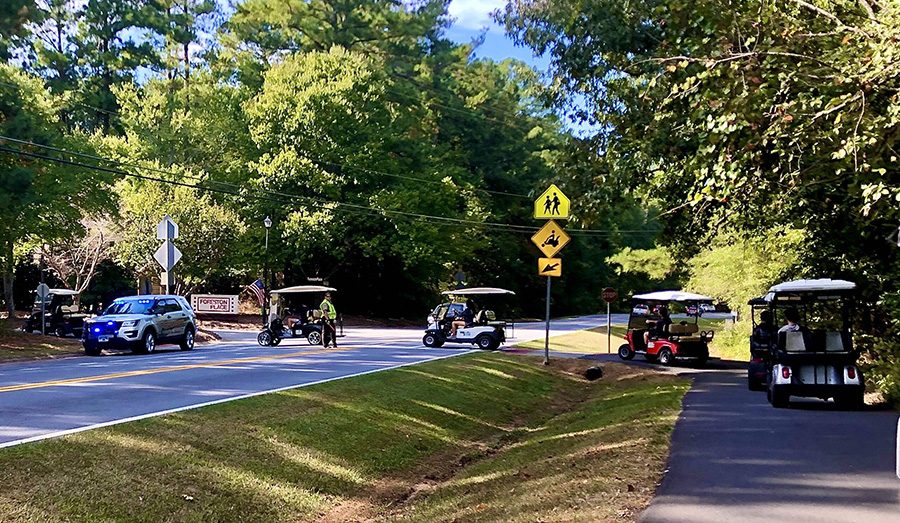 Every day at 3:45 p.m., students leaving Starr’s Mill High School by golf cart face the danger of crossing Redwine Road. It has been approximately two years since the idea of a golf cart tunnel has been brought to the local government, yet the intersection remains unchanged.

Peachtree City citizens find themselves in the turn of two seasons. Fall, the season of constant change, has begun. However, while the trees begin to shed their layers as cool air settles in, one aspect of this town will remain the same — the golf cart tunnel on Redwine Road remains unbuilt.

In the spring of 2017, the progress of the Redwine Road golf cart tunnel was released to the public. While it was made clear that a project was in the works, a year and a half later, the intersection has seen no physical change.

“Since [the spring of 2017], we have had considerable progress, but it has all been on the paperwork agreements side between Fayette County and Peachtree City,” Project Director Phil Mallon said. “There were quite a few details to work out in terms of responsibility.”

A large scale public project requires a considerable amount of paperwork and planning before construction can begin. With an abundance of variables that could potentially set back the construction date, projects such as the Redwine Road tunnel are often delayed due to financial and planning hangups.

“We delayed starting the design drawings because we had to work out some details with Peachtree City before we could move forward,” Vice Chairman of the Fayette County Commissioners Randy Ognio said. “We had to get an IDA and all that stuff worked out, so that took a little longer than we expected.”

Since the original plan was made, it seems a majority of the paperwork has been completed with a few alterations in place. One major change involves the tunnel’s location being moved from Redwine Road to Robinson Road.

“There was a good reason [for moving locations],” Mallon said. “At the school’s entrance, the tunnel would be on what I call the southside of the entrance, so we were putting a lot of golf carts and students on the elementary side of the entrance, and they did not want the traffic there.”

While changing the location of the tunnel was a substantial modification from what was originally discussed in 2017, the budget for this project has also been adjusted to better accommodate the expenses the tunnel will require.

“The tunnel project right now has a SPLOST budget approved of $900,000,”  Mallon said. “I’m thinking the cost may be closer to $1 million, but Fayette County has committed to make money available from other SPLOST projects.”

SPLOST is a special purpose local-option sales tax that is voted in by the people to help improve public roads, buildings, parks, projects, and other needs the community has been made aware of. As of March 21, 2017, a SPLOST tax has been in place to help fund the tunnel and other projects like it.

“Fayette County had a list [as well as] Peachtree City, Fayetteville, [and] Tyrone. Everybody had a list of projects, and the citizens ultimately approved that,” Mallon said. “When you go to the store you may be aware that you pay a one penny sales tax per dollar. That’s the money we’re using for these projects.”

It was understood by citizens of Peachtree City at this point last year that the construction of the tunnel would take place in the summer of 2019, and while financial progress was made, a shovel has yet to strike the ground.

Mallon believes the tunnel will be completed in the summer of 2020. However, “I think it will probably be [built] spring of next year,” Ognio said. “I haven’t seen any designs on it yet, and that’s the first thing that has to be completed.”

With a new location, no design, and no feasible construction date, the tunnel seems to be at a standstill once again. This begs the question whether Peachtree City citizens will witness construction now, in a year, or if the tunnel will remain a hopeful vision never to be fulfilled.