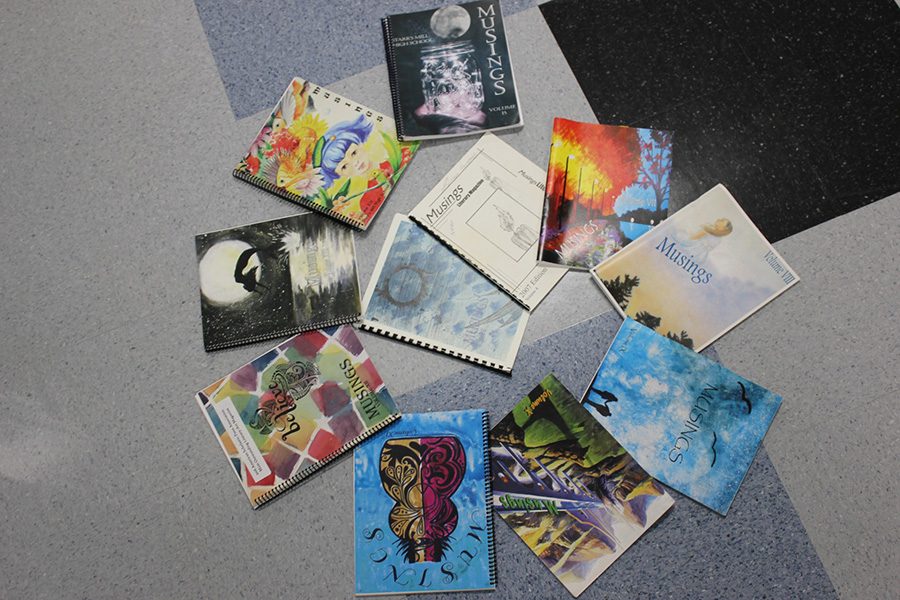 Volumes IV-XV (from 2009-2019) of the MUSINGS literary-art magazine. Volume XV earned the most individual student awards in school history.

Being published is something that many people might have not even thought about, but it is more possible than one might think. At Starr’s Mill High School, MUSINGS, the school’s literary-art magazine, is student-run and includes poems, short stories, artwork, and photos exclusively made by students.

Adviser of the magazine, Bonnie Stanford, said, “It’s important that we emphasize that it’s both because some schools just have a literary magazine, but ours is representative of the written word and artistic mediums.”

By saying that it is student-run, It truly means that everything is done by the students. Students in the creative writing classes read and look over everything that is submitted, edit what needs to be edited, organize what goes in the magazine, and arrange how it looks. The advisers try to be as “hands-off” as possible.

“They’re in charge of reading through, editing, picking, keeping each other on task, which is probably one of the harder parts, and we make sure things don’t fall apart,” Stanford said.  “We don’t want it to be things that we picked or that we made, we want it to be as close to 100% student-driven as it can be.”

It takes about a year to make the final product. People need to write their stories or make the media that they are planning to submit, then give them to the magazine either online, through social media, or handing it in.

Jillian Bowen, last year’s co-adviser for MUSINGS, said, “They read all the works that have been submitted, they evaluate them, typically in groups, we evaluate them anonymously, and then each piece is scored. The highest scoring pieces go in the magazine.”

Anyone who wants to be a part of the magazine can submit something. They don’t have to be in the creative writing class. After that, proper edits are made to each piece. When edits are done, the magazine is organized into categories and typed up. Then, to the printer, it goes.

Once the magazine is completely finished, it is submitted to the Georgia Scholastic Press Association to see what they placed in the state. Last year, MUSINGS got a score of “excellent,” and won the,“All Georgia Spread Award,” which is how it looks across a two full-page spread.

It is important that people know about this because it can hold so many meanings for people, and even Starr’s Mill. So much time and money go into sports like “new jerseys for the football team,” that people don’t get to realize the beauty of the arts.

“I think it’s a great thing because we have so many different activities for kids to get involved in, and this isn’t just an activity, but it’s a testament to what we are able to actually produce and create here at Starr’s Mill, so to me, one of the things that’s so beautiful about it’s a lasting testimony to the kids we’ve had come through,” Bowen said.

In the past, the literary-art magazine has opened many doors for people. Students who may not be interested in sports or other extra-curriculars have found writing as a way to express themselves. It can also leave their name as a legacy so that future readers can know who they were.

“[The magazine is] a meaningful way for kids to be involved that’s not sports and not necessarily music, even though we have decided to start including music, for kids to find passion in areas that they didn’t know they had talent,” Stanford said. “I think it is a really good avenue for kids to explore different genres, and writing is always a good way to do that.”

Starr’s Mill is more than just sports — this school is expressive, this school is creative, this school is the Panthers. Panthers don’t ignore all that life has to give — they shine. MUSINGS is the literary-art magazine of Starr’s Mill, so be bold and write, draw, take pictures, make music, express your thoughts in a way you might not have thought about before.