The shift to green 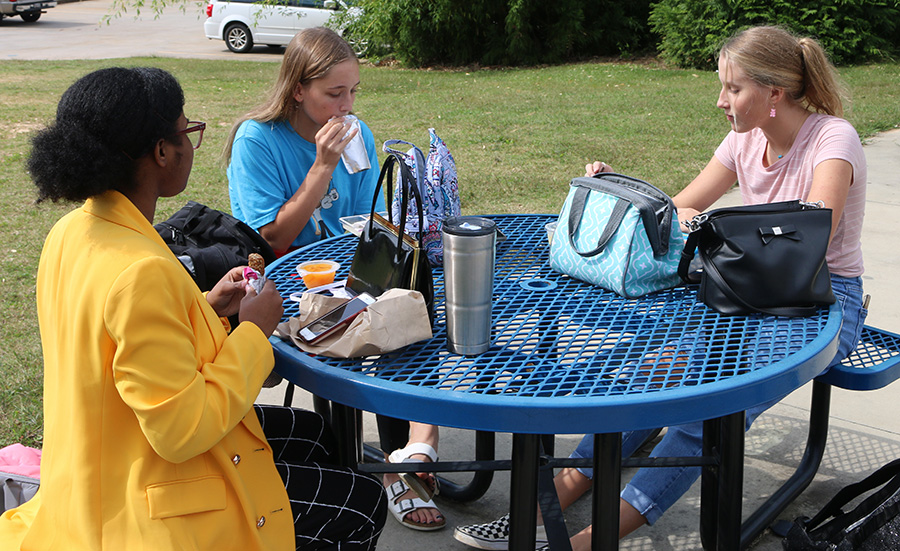 Sophomores Ivey Breinig, Mia Haefner, and Alaina Campbell (left to right) eat lunch on the patio outside of the cafeteria. Students and faculty have been making adjustments in preparation for switching from the “yellow” hybrid A/B schedule to “green” merged schedule. The change takes effect Oct. 19 and includes switching from three to four lunch periods.

On Sept. 28, Fayette County Public Schools released an announcement stating that schools will transition to the full-time brick and mortar model, also known as the green level. In response, students and faculty alike are scrambling to readjust to a completely in-person schedule.

“We’re not going to be making a huge number of changes to our safety protocols, because ultimately we’ve already put in place as much as we could possibly put in place in this building,” Principal Allen Leonard said.

The announcement stated that the green level would be implemented in phases, depending on grade levels. Starting Sept. 28, third and sixth graders returned to school four days a week, and on Oct. 12 fourth and seventh graders did the same. Eighth graders and high school students will have only one four-day week, starting on Oct. 19.

When students came back in August, there was already a massive amount of change. Lockers were exchanged for backpacks, only two people were permitted per lunch table, every hallway was only one way, and masks were mandatory. But the biggest change of all was that only half the student body was on campus.

On Mondays and Tuesdays, the “A” group attended Starr’s Mill in person, leaving the other half of the students, the “B” group, to do their work online at home. On Thursdays and Fridays, the roles were reversed. Wednesdays were asynchronous for everyone.

Different departments and teachers have had different approaches to the hybrid schedule, in order to cope with seeing students less than half the week.

Some teachers taught the same lessons twice a week, once for the A group and once for B. Some teachers adapted their curriculum to be as normal as possible—if on campus, the lesson is learned in class, and if students are at home, it’s learned via video or posted notes.

“It’s [so] different from past school years when everybody was here at the same time,” English teacher Bonnie Stanford said. “So there’s still a lot to manage.”

With the shift to a full week on campus, many teachers are forced to reconfigure their classwork and perhaps how they’ve been teaching since August. Because of the different groups on campus, some classes have one group a couple of days behind the other, which could potentially make merging on Oct. 19 more difficult.

Nonetheless, it’s still a step toward the normalcy students experienced during the fall semester of 2019.

“As far as my pacing, as far as the activities I’ve done, without the group work, we can still do all that stuff,” economics teacher Mark DeCourcy said. “It will go back closer to what it was before.”

Along with the shift to green, the completely virtual Wednesdays will come to an end after Oct. 26. Wednesdays have been used as a day to deep clean the building in preparation for the B group. This cleaning will now take place after school hours. Teachers and students alike will feel the loss of virtual Wednesdays, which many used as a chance to catch up and regroup during the week.

“That would be the challenge,” Stanford said. “If we get used to people being here five days a week, and then we have more people [who] have to quarantine, then we’re still having to manage the people who are working on Schoology from home and the people who are still able to attend class.”

Merging the A and B groups won’t just have an educational impact on students, but a social one as well. During the two months spent on the hybrid schedule, many classes have developed split personalities between the A and B groups. Nonetheless, students’ excitement seems to have overcome their anxieties.

“It will be nice to see the other half of the school, and all my friends on A schedule,” senior Aiden Hammond said.  “It will be weird. [It’s like the] first day of school all over again.”

One of the benefits of the yellow level was more one-on-one class time for students, but the green level will diminish this severely. Students have said they aren’t too concerned about the changes, and they believe going to school five days a week will improve their work ethic.

“In a bigger classroom, someone could ask a question that could also be mine,” freshman Sofia Gonzalez said. “[Instead of] being one on one in a small classroom and me saying that question out loud and having that fear of judgment.”

Because Fayette County is shifting to green, there have been questions on what happens if the COVID-19 cases rise significantly. There is no exact number of cases that will dictate whether the school transitions back to the hybrid schedule or goes completely virtual. Any shifts in the schedule will be based on the current situation at hand.

With double the amount of students at school, thus in the classroom, in many instances it’s not possible to keep each student six feet apart. Many teachers are having to rearrange their classrooms to allow the maximum amount of social distancing possible.

Although shifting from the hybrid model to a full-time schedule will bring some big changes, for the most part, the school will stay the same.

Masks will still be required during the entire school day except for during lunch. There will be no lockers, and the social distancing standards implemented during the yellow level, such as the one-way traffic flow in the hallways and the socially distanced lunches, will remain in place. Additionally, because of a grant from the U.S. Department of Agriculture, free lunches and breakfasts for all students will continue.

The biggest change will be during the lunch periods themselves. Instead of the traditional three 30-minute lunches during fourth period, there will now be four 24-minute lunches. This was the best option to help maintain social distancing guidelines.

“I think we’ll be able to handle [the safety standards],” Gonzalez said. “We’re more mature in high school, so I feel like the students will be more aware [of the danger].”

The main fear paired with the full-time schedule is that the number of COVID-19 cases will rise, which could, at best, result in a few more quarantines for some students. At worst, the school could drop to the red level, or fully virtual. It’s imperative students and staff adhere to the safety measures in place, lest the week of Oct. 19 be the last we see of each other in person.