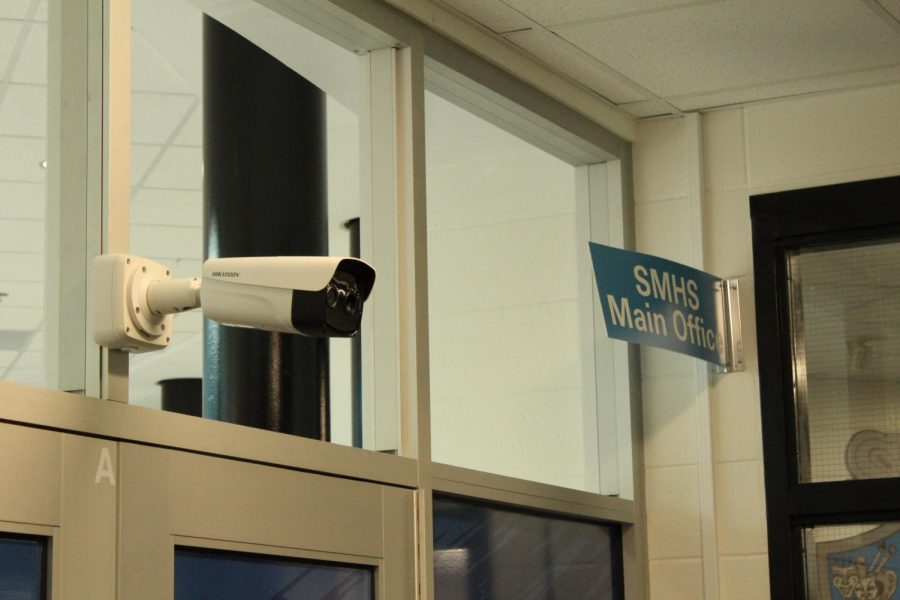 Thermal camera mounted above the main entrance into Starr’s Mill. Each Hikvision camera, priced at $7,000, is intended to scan for elevated body temperatures as a potential sign of COVID-19. These thermal cameras are ineffective due to combined factors of school population, reflective surfaces, and recommended use by the Food and Drug administration and the World Health Organization.

All schools in Fayette County have installed new thermal cameras designed to read heat signatures. However, these cameras may not be effective.

Located in primary entrances, each camera measures the temperatures of students and visitors for signs of fever, one potential indicator of COVID-19.

At a meeting on Aug. 25, recently retired FCBOE superintendent Dr. Joseph Barrow and the Board of Education approved funds to purchase almost $525,000 worth of equipment from the Chinese company Hikvision.

Dr. Barrow publicly announced that he believed these cameras would be “The last piece of the puzzle for reopening schools [in Fayette County].”

Priced at $7,000 a camera, the funds were provided from the eSplost budget, otherwise known as the “penny tax.”  These cameras were bought to be compatible with the current system of cameras in place at each school. At the least, every school installed two cameras based on a number of primary entrances.

According to the FDA, these cameras should not be used for mass fever screening, scanning multiple people at a time in crowded areas.

In addition, they should be positioned in areas where people’s faces are free from coverings or obstruction, including masks, long forward-hanging hair, and makeup. However, students and visitors are required to be wearing masks before entering any school building.

The FDA also suggests that the person being scanned face the camera and pause. Most students are not pausing to be scanned, and usually keep their heads down, which allows for more input from reflective surfaces.

An article from BBC, which provided facts from the World Health Organization, explains how the cameras lose effectiveness if not properly attuned to the environment they are stationed in. The FDA adds that the cameras should be used away from reflective surfaces.

Most schools in Fayette County use a white painted cinder block construction with polished tile floor, and white is the most reflective color on the visible spectrum.

It is possible they can give improper readings and set off false alarms.

In a publicly released statement, assistant superintendent Mike Sanders added that the cameras would be extremely accurate to an error margin of .5 degrees. This applies to skin temperature, which is not body temperature.

All of this after the ethics behind Hikvision were called into question by Ben Nelms of The Citizen.

Hikvision, a company specializing in video surveillance equipment and 27 other entities associated with them, have been banned. The primary reason for this is charges of ethnic cleansing of Muslim minority groups in China.

With that in mind, they have been charged by the United States Government with terrorism, and acting contrary to the foreign interest polices of the U.S.

The intentions and concept are good. Students need a safe and healthy learning environment, especially as the school system moves to “green” status.

Accounting for the ineffectiveness of the cameras, there are a multitude of other ways that people can protect themselves, including washing hands, wearing a mask, and taking temperature readings at home.

Everyone can do this, and everyone can make Fayette County schools safer and healthier learning environments.