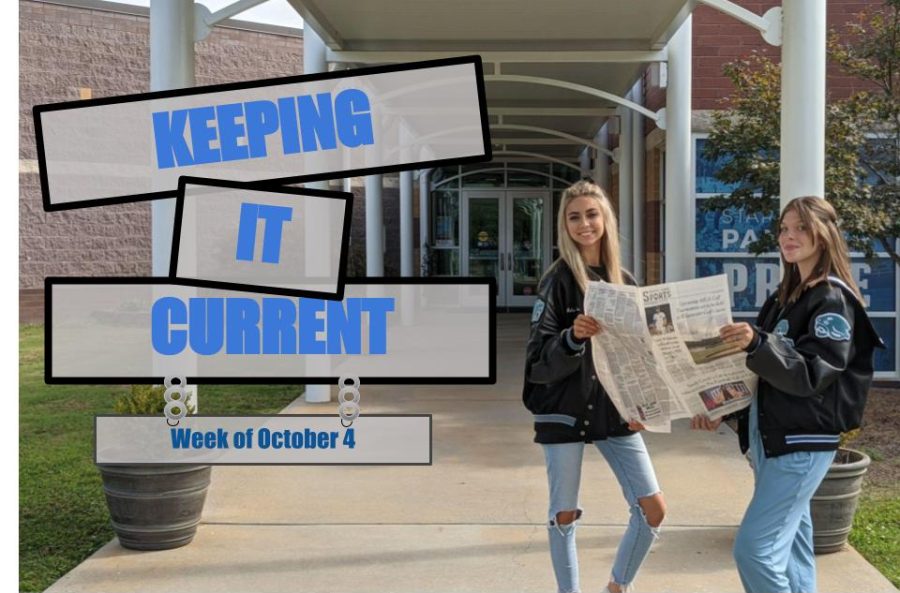 Panthers, we have officially survived the first nine weeks. Time to celebrate with a long weekend! But before you head off for vacation, check out these amazing KICs. We have errors in the ‘Squid Game’ translations, Atlanta’s mayor reducing crime, online students getting behind, the suspect behind a Texas school shooting in custody, and the Biden administration restoring monuments.

October 4 – Fans speak out on errors in ‘Squid Game’ translations

Netflix’s new and widely admired Korean drama “Squid Game” was up to steal the spot for Netflix’s #1 original series since its release last month. As it gained popularity, fans discovered errors in translations within the show.

Youngmi Mayer, a fluent Korean-speaker, addressed these slip-ups via Twitter. Fans are upset that the original meaning of the script is being lost through poor translation because caption-users are not receiving the full dialogue. Another viewer stated they watched the drama with a friend, both using separate laptops, and their English subtitles were different.

The errors in the popular series alter the meaning of the characters’ words, and even make it difficult for those attempting to learn the Korean language. Netflix is yet to respond to these claims on improper translations within the show.

Mayor Kesha Lance Bottoms announced in July that she would pursue a $70 million investment into plans to combat violent crimes. Some of the funds would go into a violence reduction office.

This violence reduction office plans to lead several changes in Atlanta such as placing 1,000 streetlights in areas with high rates of violent crimes and installing 250 cameras into the city network by the end of this year. They also plan to hire 250 more police officers.

An equality office is also in development, which will work on social justice policies and confronting other issues. The city council advises the Chief Financial Officer to amend the 2022 budget to create funding for the violence reduction office and the equality office. The legislation also states that the Chief Financial Officer and Commissioner of the Department of Human Resources can transfer positions into these new offices.

About 75% of the students who are virtual in Fayette County this school year have been failing most of their classes and falling behind schedule. Assistant Superintendent Julie Turner told the Fayette County BOE last Monday that 201 out of 282 virtual students have failing grades on their progress report cards.

The parents have been notified about their children falling behind. Virtual students zoom in with their teachers twice a week, while using the other three days to complete assignments. Virtual students in elementary and middle schools will be evaluated at the end of this month to see what the problem is.

By the end of the year, the Fayette County Board Of Education will decide if they are going to continue offering such classes for those who are virtual for the spring semester, or if virtual students will have to attend school in person next semester due to their grades.

The suspect of a Texas high school shooting is in custody, according to Arlington police. Timothy George Simpkins, age 18, will be charged with three counts of aggravated assault with a deadly weapon after he opened fire inside Timberview High School on Wednesday.

The Arlington Police Department has stated that Simpkins turned himself in without resistance. Simpkins’ bond has been set at $75,000. The shooting left four people injured, two were shot and three were hospitalized. One 15-year-old victim remains hospitalized in critical condition. Another 25-year-old suffered from gunshot wounds, and a teenage girl may have been grazed by a bullet

All 1,700 students who were inside the building at the time of the shooting were evacuated. The first report of shots came around 9:15 a.m. on the second floor of the building. A physical fight broke out in an upstairs classroom that led to the shooting.

The Biden Administration has released a statement regarding the restoration of three national monuments around the United States. The Bear Ears and Grand Staircase Escalante are national monuments that were downsized in 2017 by former President Trump. The move to downsize was due to the energy and oil that could be found on the territory. Together the monuments in total span more than 3.2 million acres in Utah.

The Bear Ears monument has significance to multiple indigenous tribes in the region. For multiple years Indigenous people have been trying to reclaim that land as sacred. The original plan to downsize these territories would decrease the 85%, and the new statement from the Biden Administration will dissolve that plan.

Another national monument to be restored is in the Northeast Canyons and Seamounts National Monument, located southeast of Cape Cod. Former President Trump enacted a new rule change which allowed commercial fishermen in the 5,000 square-mile area. Environmentalists pushed back against this new rule due to the fragile life that is said to be in the area. These new acts have received both praise from environmentalists and many tribes spokespeople, but are followed with criticism from Republicans and fish companies alike.